Andrew Brunson, one year in freedom

“I had periods where I was suicidal, but realized God is worthy of all my pain and suffering”, Pastor Andrew Brunson said about his imprisonment in Turkey. He has released a book telling his story. 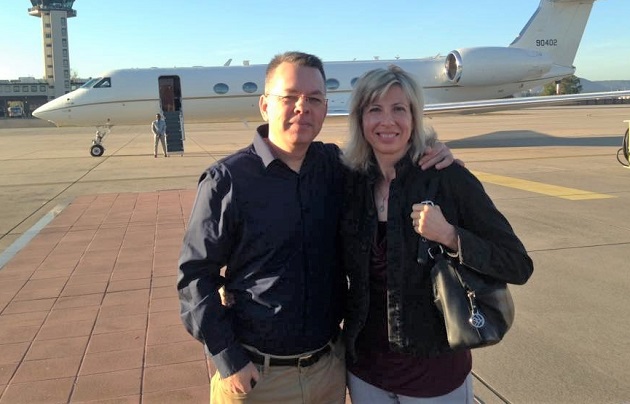 Pastor Andrew Brunson and his wife Norine after landing in the US on 13 October 2018. / Facebook Andrew and Norine Brunson.

One year after being released from a Turkish prison, and going back to the United States, American pastor Andrew Brunson has published the book “God’s Hostage: A True Story of Persecution, Imprisonment, and Perseverance”.

He was detained 735 days by the government of President Recep Tayyip Erdogan, which accused him of sympathizing with the dissident Gulen movement, and was released on October 13, 2018.

“They wanted to make an example of somebody, of a missionary, to intimidate other missionaries so that they would self-deport. And they also wanted to intimidate local believers. At some point, the government decided to keep me as a political pawn, a bargaining chip. They wanted concessions from the US”, Brunson told Christianity Today.

In an interview with Religion News Service, he explained that “there were several very low points. Sometimes I was in a very crowded, an overcrowded cell, but even so I was isolated, especially by my faith. I was the only Christian”.

BRUNSON: “GOD IS WORTHY OF ALL MY PAIN AND SUFFERING”

Brunson even had “periods where I was suicidal, where I lost all hope. I was in despair and had frequent panic attacks”.

“I began to focus myself on God and fight for my faith. I became aware that I could do very little to fight for my freedom, but I thought, I’m losing my relationship with God in this terrible environment and I need to focus because if I lose this, then I’ve lost everything in my life”, he added. 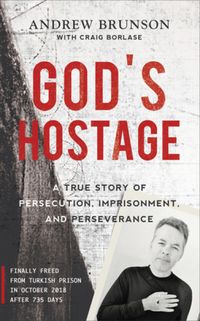 Talking to Christianity Today, Brunson stressed the importance of “guarding against resentment. I felt abandoned by God, and in those circumstances it was easy to let my heart grow cold But as my wife Norine reminded me, whatever doubts you have, God remains the same, He is faithful, He is true”.

“One thing I really tried to focus on was cultivating the fear of God: having an eternal perspective, seeing things through His eyes. I knew that if I feared God the way Isaiah did, I would be more willing to undergo any hardship, which would confirm that He is worthy of all my pain and suffering”, he said.

Brunson explained that “what made a huge difference for me was the prayer of many people, knowing that they were praying for me”.

“Into my first year [in prison], as the prayer movement grew, Norine would tell me that there were more and more people praying. I don’t say that God put me in prison. I think that was just an attack on us. But God used what was intended for evil and used it for His purposes”, the pastor told Christian Post.

During his second year, “I still didn’t want to be in prison but the battle was to fight for submission to God’s purpose in my life. I said, ‘God if You want me to be in prison, if this is Your purpose, then I want to be willing to do this’”, he pointed out.

“WE HAVE THE DESIRE TO GO BACK”

After 23 years serving as church leaders in Turkey, “God put some of His love for Turkey into our hearts. So it is not so much an emotional attachment as saying we are committed to see blessing for Turkey because of God’s love. And so we have a desire to go back”, Brunson said during the Religion News Service interview.

“We cannot go back under this regime, obviously, but at some point we hope that the conditions will be right, to go back and visit and see our brothers and sisters there, who we love very much. We would also like to help people who are basically the next generation of church leaders in that area”, he added.

However, right now, Brunson is “relatively pessimistic about Turkey”. A number of other foreign Christian leaders have been “deported just in this past year, and I think there is a time of persecution coming. There will be a harvest, under God’s power, but it will happen under difficult circumstances”, he told Christianity Today.