In the opening evening, between six and seven thousand attendants packed the hall. The vast majority were Indonesian evangelicals who had been anticipating the global event for a long time. 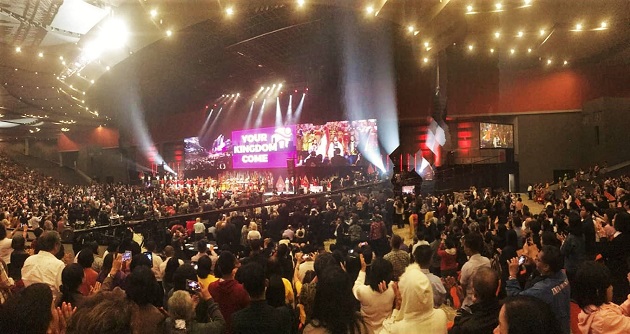 This week, November 7-13, Indonesia is hosting the General Assembly of the World Evangelical Alliance (GA WEA).

The global event in Jakarta is intended to stir a renewed vision among the evangelical community across the globe to step into a new decade of disciple making and intergenerational leadership, as well as address various global causes and pressing issues of the 2020s. The main theme of the assembly is, “Your Kingdom Come”.

The official venue of the GA is a beautiful complex, called Sentul International Convention Center, situated some 50 km south of Jakarta.

Delegates of Evangelical Alliances from all over the world, as well as local Indonesian Christians filled the vast auditorium. In the opening evening, between six and seven thousand attendants packed the hall. The vast majority were Indonesian Evangelicals who had been anticipating the global event for a long time.

The General Assembly itself consists of more than 800 delegates from 92 countries. 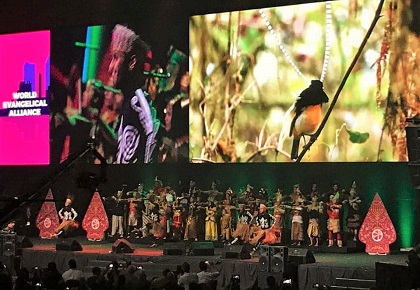 Eleven years ago, in October 2008, the World Evangelical Alliance held its previous General Assembly in Pattaya, Thailand. Some five hundred delegates then represented many nations. Dr. Geoff Tunnicliffe, WEA international director at that time, stressed, “We need a renewal of our historic commitment to the character of the Gospel and our biblical distinctive as evangelical Christians who are committed to the authority of Scripture. What drives us and undergirds us is our commitment to the Scriptures.”

Today, more than a decade later, the participants in WEA GA 2019 are focusing their prayer, purpose and passion to “re-examine, re-align and re-commit ourselves to the needed mindset, processes and structures to fulfill the Great Commission in our generation and the next.”

ROUND TABLES ON MATTHEW 28

A major feature of the 2019 WEA assembly is a designated area for table group discussions. Eighty five round tables, each one hosting half a dozen delegates from various cultures, are situated right in the center of the auditorium. The purpose behind this arrangement is to allow EA leaders from various regions to have time for interaction and discussions, visiting afresh Christ’s Great Commission in Matthew 28.

“As a community, we desire to experience hearing from God together and receiving inspiration,” announced the organizers. “We seek to understand and embrace what God is calling us to do in the next season as a Global alliance.” Thus, the table group discussions are designed to provide opportunities for deeper engagement and reflection on “holistic disciple making, mission together with the younger generation and intergenerational leadership”. These discussions are to be held after each of the morning plenary sessions of the General Assembly. 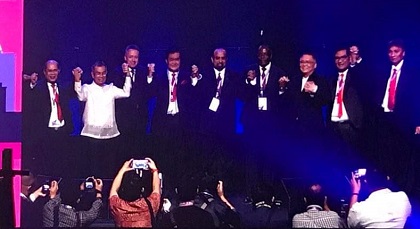 Just south of Earth equator, mid-November afternoon temperatures in Indonesia vary between Celsius 32° and 37°. Buzzing motorcyclists and busy traffic fill the Southeast Asian country’s left side driving roads. Nipa palms and blossoming sakura trees are to be seen all along the sidewalks and waterfronts. Humidity is high, and on top of their jet lag, Northern Hemisphere delegates struggle adjusting to the local warm spring climate.

Indonesia has a population of about 260 million. This is the world’s largest archipelago country, with more than 17,000 islands. Among these, the most notorious are Sumatra, Java, Bali. More than 700 languages are spoken here, spread between over three hundred ethnic groups.

According to a 2010 census, 87 percent of the Indonesians share Muslim faith, while about 10 percent profess Christianity as their main confession.

The meeting was opened with Indonesia’s national anthem “Indonesia Raya”.

In an introductory address, the chairman of Fellowship of Indonesian Evangelical Churches and Institutions, Rev. Dr. Ronny Mandang, emphasized that the local Christians, a religious minority in Indonesia, have prayed and cried for this coming moment, and it was now a true blessing to watch it coming to life.

At the same time, he wrote in a greeting address on the event webpage, Indonesia has become a model of peaceful cohabitation of faith groups: “A shared identity has developed, defined by a national language (Bahasa Indonesia), ethnic diversity, religious pluralism within a Muslim-majority population, and a history of colonialism and rebellion against it. Indonesia’s national motto, “Bhinneka Tunggal Ika” (literally, “many, yet one”) articulates the diversity that shapes the country.”

An artistic sand drawing in real time, accompanied by inspirational instrumental music set the mood of the opening evening. The program was marked by a bright spectacle involving folklore ensembles, traditional singing and dancing, as well as special videos on some of the country’s most significant cultural heritage.

Smiles from every tribe welcoming you!

The beauty of cultures displayed for you!

The wonders of the land is spread like open hand:

Here you are! Indonesia welcomes you!

Indonesia, Indonesia – the land of joy, peace and harmony.

Indonesia, Indonesia – the land of unity in diversity.

Bishop Dr. Efraim Tendero, General Secretary of the WEA emphasized: “Indonesia has the highest Muslim population in the world. We have carefully chosen this country to host our General Assembly, because Indonesia has achieved harmonious relationships between religions. The church of Jesus Christ is alive in this country.” 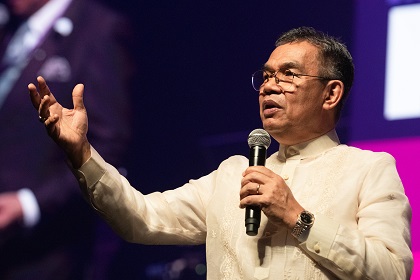 “The assembly’s topic serves as a reminder that we need to focus on intergenerational, intentional and holistic disciple making, in order for the Kingdom of God to advance in this world. From Jerusalem to Timbuktu, evangelicals are the fastest growing faith group in the world during the last sixty years. With a deep gratitude for what God is doing, this assembly aims to strengthen that tendency, furthering God’s Kingdom on earth.”

After bishop Tendero, a time of prayer was led by WEA Deputy Secretary General for Operations, Rev Raymond Swatkowski. He stressed that the 2019 GA was taking place with a sense of expectancy, “just as we anticipate Your kingdom is coming”.

In a message addressing the conference Rev Dr Niko Njotorahardjo (Indonesian pastor managing the Sentul International Convention Center, and host of the assembly) pointed to the close connection Jesus himself made in Matthew 24:14 between the preaching of the Gospel to every nation and His Second Coming.

He quoted a study attributed to Gordon-Conwell Theological Seminary, according to which 78 percent of today’s Christianity was started in the beginning of the 20th century. We are coming to the fulfillment of Joel’s prophecy, Rev. Njotorahardjo said, when at the end of times the Spirit will work mightily to touch every nation with the Good News, and bring Christ’s return even closer. We are waiting for a new Pentecost in the eve of God’s Kingdom coming.

WEA Deputy Secretary General for Ministries Godfrey Yogarajah led a closing prayer for Christ’s blessings over the World Evangelical Alliance, so that it can be a blessing to the nations. He prayed for unity of hearts, and for a deep challenge for all present “to fulfil the Great Commission in our generation.”