A journalist follows the detention of a Taiwanese citizen in China, after he displayed a R.O.C. flag. Youtube platform is used to highlight his case. 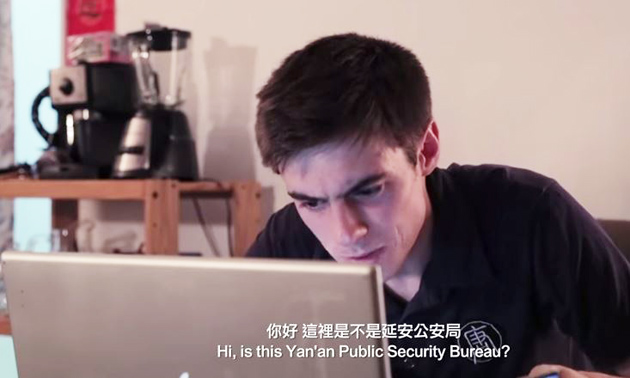 Caption of journalist Ben Hedges, trying to connect with police in China. / Youtube

A video from Ben Hedges, a New-York based journalist for New Tang Dynasty Television, and the host of “A Foreigner’s View of China and Taiwan” on Youtube, reports that a man named Zhenyi Fan from Taiwan has been detained in mainland China for displaying Taiwan’s Republic of China (R.O.C) flag.

His whereabouts are unknown and as shown in the video, his family and any interested party are not able to contact him. Although having shown the R.O.C flag in different locations in China on numerous occasions, Fan was detained in this case as the flag was displayed at a time when Eric Chu, mayor of Taipei, was visiting Xi Jingpin, the President of China and on Pagoda Hill, which is significant as the CPC established their headquarters there during wartime in 1937.

The R.O.C flag represents Taiwan as a country with its own sovereignty so that displaying it, particularly at international events, can be provocative to mainland China.

One incident of the display of the flag and its resulting reaction took place in the London Olympics. Although Taiwan competed separately to mainland China, when all competing countries’ flags were displayed in alphabetical order in Regent Street in London, the R.O.C flag was removed, after concerns that China would be offended.

It was later replaced with the Chinese Taipei Olympic Committee flag, as per an agreement between Taiwan and the International Olympic Committee. Visitors from Taiwan to the Olympics were asked not to display the R.O.C flag by the Tourism Bureau. China regards Taiwan as a renegade province and so prefers the island to represent itself using a neutral flag and anthem.