“It is not a favour done by one country to another, it is for both countries to benefit”, John Kerry said about the reopening of relationships with Cuba. 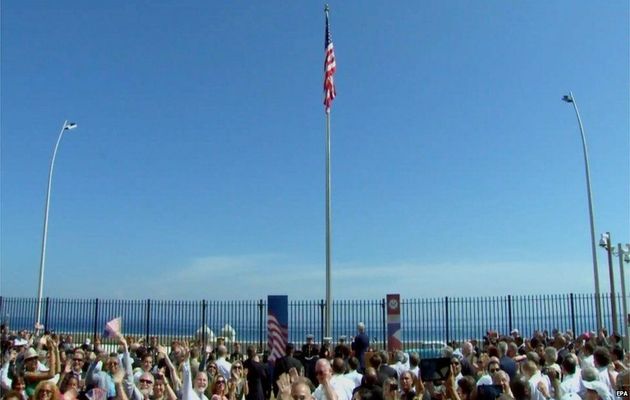 People cheering after the US flag was raised / EPA

John Kerry, the first US Secretary of State to visit Cuba in 70 years, presided over the ceremony in Havana.

The three US marines who took down the US flag in January 1961: Larry Morris, Mike East, Jim Tracey were at the ceremony too, as they were in charge of raising the American flag again.

“IT IS FOR BOTH COUNTRIES TO BENEFIT”

US Ambassador to Cuba Jeffrey De Laurentis opened the ceremony by thanking the 1961 marines who took down the flag, who received a standing ovation from the gathered crowd.

De Laurentis introduces Richard Blanco, a Maine poet who read at president Obama’s second inauguration in 2014. Blanco was born to a Cuban exile family and was raised in Miami. Blanco read a poem he wrote for the occasion: Matters of the Sea, or Cosas Del Mar.

After Blanco’s poem, the national anthem of the Republic of Cuba was played, while all gathered American diplomats stood. 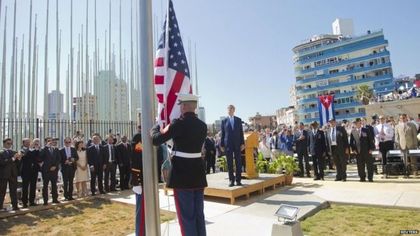 “Thank you for joining us at this truly historic moment as we prepare to raise the US flag, this morning, I feel very much at home here”, Kerry began.

“And I feel at home here because this is, truly, a memorable occasion, a day for pushing aside old barriers and exploring new possibilities”, he continued.

He said that this reopening “doesn’t mean that we should or will forget the past. How could we, after all. At least for my generation, the images are indelible”, and then recalled how he lived those days as a student.

Kerry assured that “decades of good intentions aside, the policies of the past have not led to a democratic transition in Cuba”.

And “it would be unrealistic to think that Cuba’s government would be transformed by renewed diplomatic relations with the US”, he added.

“The US remains convinced that the people of Cuba will remain best served by a truly democratic government”, he commented

Restarting normal diplomatic relations, is not “a favour done by one country to another, it is for both countries to benefit, people to people. Government to government.” 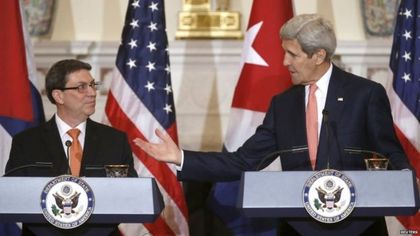 Regarding the embargo, the US Secretary of State believed that the US administration “strongly favours the lifting of the trade embargo on Cuba”, but that “it remains up to Congress to lift the embargo.”

He then thanked Pope Francis for all his help in this reopening, and payed tribute to the people of Cuba and the Cuban community in America, quoting Jose Martí: “Everything that divides men is a sin of humanity.”

He concluded talking in Spanish: “we are sure that it is time to get closer, to show everyone that we are not enemies or rivals but neighbours. And it is time to let the world know that, we wish each other well.”

Following Kerry´s words, he then invited the three marines who took down the flag to raise it once more as the US national anthem played.

Earlier, former Cuban leader Fidel Castro wrote an open letter in which he said the US owed Cuba millions of dollars because of its trade embargo.

Cuba said the embargo - which it calls a blockade - is hugely damaging to its economy. It says relations will be fully restored only once it is lifted.

During that 89th birthday, in the company of Bolivian President Evo Morales and Venezuelan leader Nicolas Maduro, former Cuban leader made no mention of the US embassy.

Political dissidents in Cuba have not been permitted to attend the ceremonial opening of the US embassy in Havana.

“The right thing to do would be to invite us and hear us out despite the fact that we don’t agree with the new US policy,” Antonio Rodiles, head of the dissident group Estado de SATS, told the Associated Press.

Meanwhile, Jeb Bush and Marco Rubio, both leading Republican candidates for president, published statements Friday morning criticizing the Obama administration for the thaw in US-Cuba relations, timed to Kerry’s visit to the island.