Evangelical pastor Nicolas Guérékoyaméné-Gbangou and leaders of Muslim and Catholic communities in the country were awarded after achieving to reconcile religious groups amidst a crisis. 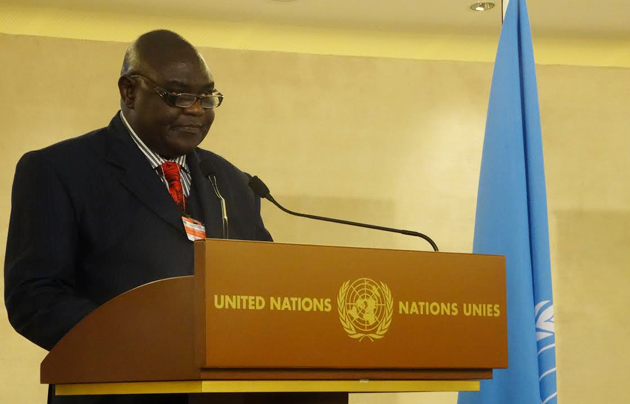 The United Nations awarded the initiative that achieved to reconcile religious groups in the hope of reaching a lasting peace in a country devastated by a war between fractions.

The Award ceremony took place on 19 August 2015 during the events marking World Humanitarian Day at the Palais des Nations, in Geneva.

It is in Sergio Vieira de Mello’s memory and to perpetuate his ideal that the Foundation attributes every two years an award to an individual, group or an organization having done something special and unique to reconcile people and parties in conflict.

Sergio, UN Secretary General representative, was killed in the UN compound bombing in Bagdad on 19 August 2003.

The Interfaith Platform promotes dialogue as a preventive measure against religious violence and a means to pursue peace across CAR.

It was established in 2013 by representatives of the three most important religions in the country, the Catholic Archbishop of Bangui, Mgr. Dieudonné Nzapalainga, the President of the Islamic Council in CAR, Imam Oumar Kobine Layama and by the President of the Evangelical Alliance, Pastor Nicolas Guérékoyaméné-Gbangou.

A COUNTRY RAVAGED BY VIOLENCE

In the middle of the war, the three religious leaders agreed to act together to address the growing unrest in the Central Africa Republic. Since then they continue to persuade Muslims, Catholics and Protestants to avoid further violence and revenge among their religious communities.

They travel extensively throughout the country, visiting cities and villages and talking to the communities about peace, mutual respect, tolerance and trust. In addition, their international lobby has led to the unanimous decision of the Security Council to establish a UN Peace Keeping force in CAR, MINUSCA.

Ravaged by violence, the Central African Republic, a country at the heart of Africa, has experienced the worst crisis in its history.  Manipulating religion for political purposes in the country has caused the death of hundreds of thousands of people and sent many more on the roads to exile and displacement.

The heads of Catholic and Muslim and Protestant communities have been working together tirelessly to restore the social fabric of their country by addressing the root causes of mistrust in remote villages.

A MODEL MUCH NEEDED IN OTHER COUNTRIES

“The Interfaith Peace Platform shows what it takes during a crisis to bring a country together across the social, cultural and religious divides”, said Laurent Vieira de Mello, president of the Sergio Vieira de Mello Foundation.

“The Interfaith Peace Platform serves as a model much needed in other countries in conflict and shows that prevention and dialogue are the key for solving refugee and displacement crises.”

Read more about this story in this article on The World Evangelical Alliance’s website.