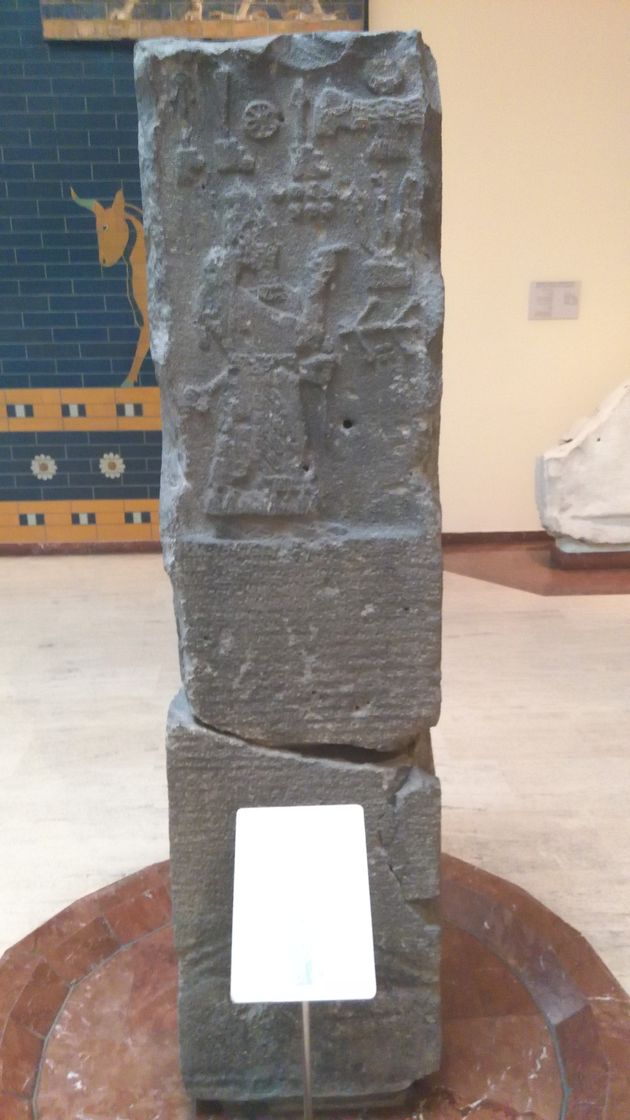 The Stele dates from around 800 BCE and provides one of the earliest archaeological records of the name Palestine (Pa-la-áš-tu). The inscription mentions an Assyrian raid against the king of Aram and the details of the eventual tribute received. The translation of the stele is as follows:

“In (my) fifth year of reign, when I took my seat on the royal throne in might, I mobilized (the forces of my) land. (To) the wide spreading armies of Assyria I gave the order to advance against Palashtu (Palestine). I crossed the Euphrates at its flood. The wide-spreading, hostile kings, who in the time of Shamshi-Adad, my father, had rebelled and withheld their tribute. At the command of the gods Assur, Sin, Shamash, Adad, and Ishtar my allies [terror] overwhelmed them and they laid hold of my feet and I received tribute . I gave the command [to march against Aram] to Mari’ [Ishutup] in Damascus,[his royal city].  I received 100 talents of gold and 1,000 talents of silver talents.”

The date and content of this Stele contains some interesting parallels with 2 Kings 13. The events recorded in this stele coincide with the reign Jehoahaz of Israel. William F. Albright dates his reign to 815–801 BCE. E. R. Thiele suggests 814–798 BCE.

In 2 Kings 13:1-5 we read, “In the twenty-third year of Joash the son of Ahaziah, king of Judah, Jehoahaz the son of Jehu became king over Israel at Samaria, and he reigned seventeen years. He did evil in the sight of the Lord, and followed the sins of Jeroboam the son of Nebat, with which he made Israel sin; he did not turn from them. So the anger of the Lord was kindled against Israel, and He gave them continually into the hand of Hazael king of Aram, and into the hand of Ben-hadad the son of Hazael. Then Jehoahaz entreated the favor of the Lord, and the Lord listened to him; for He saw the oppression of Israel, how the king of Aram oppressed them. The Lord gave Israel a deliverer, so that they escaped from under the hand of the Arameans; and the sons of Israel lived in their tents as formerly.” (NASB)

The parallelisms between the Biblical text and the reign of Adad-Nirari III do not end here. In 2 Kings 14 we have the first mention of the prophet Jonah, the son of Amittai. The story of Jonah is considered by some scholars as an allegory. Some even reject the historical figure of Jonah himself. Certainly it seems from the text of 2 Kings 14 that Jonah was understood to be a historical figure. Furthermore Jesus’ frequent quotes from Jonah seem to suggest that for Jesus, Jonah was a real historical figure also.

In Luke 11:30 Jesus contrasts his generation with the generation that lived in the time of Jonah, “For as Jonah became a sign to the people of Nineveh, so will the Son of Man be to this generation.” (ESV)

Both of these dates fall within the reign of Adad-Nirari III (805-782 BCE). Although, other candidates for Jonah’s “king of Nineveh” do exist, Adad-Nirari III seems to be an interesting fit due to his little-known monotheistic revolution. For reasons unknown Adad-Nirari III chose Nabu, the Assyrian god of literacy, scribes and wisdom, as the sole god to be worshipped.

In his book titled The Ancient World From c. 1400 to 586 B.C., Francis Nicole makes the following observation: “A strange religious revolution took place in the time of Adad-nirari III, which can be compared with that of the Egyptian Pharaoh Ikhnaton. For an unknown reason Nabu (Nebo), the god of Borsippa, seems to have been proclaimed sole god, or at least the principal god, of the empire. A Nabu temple was erected in 787 B.C. at Calah, and on a Nabu statue one of the governors dedicated to the king appear the significant words, 'Trust in Nabu, do not trust in any other god'.”

Nicole continues: “The favorite place accorded Nabu in the religious life of Assyria is revealed by the fact that no other god appears so often in personal names. This monotheistic revolution had as short a life as the Aton revolution in Egypt. The worshipers of the Assyrian national deities quickly recovered from their impotence, reoccupied their privileged places, and suppressed Nabu. This is the reason that so little is known concerning the events during the time of the monotheistic revolution. Biblical chronology places Jonah's ministry in the time of Jeroboam II, of Israel, who reigned from 793 to 753 B.C. Hence, Jonah's mission to Nineveh may have occurred in the reign of Adad-Nirari III, and may have had something to do with his decision to abandon the old gods and serve only one deity. This explanation can, however, be given only as a possibility, because source material for that period is so scanty and fragmentary that a complete reconstruction of the political and religious history of Assyria during the time under consideration is not yet possible.”

Under this scenario, if indeed Adad-Nirari III is the king of Nineveh, it would seem reasonable to conclude that by sending Jonah, the God of Israel was extending a hand of mercy to the very king that had earlier delivered Israel from the oppression of the Arameans.

Jonah’s message led the population to repentance and in their turn to monotheism perhaps they identified Jonah’s god with Nabu. Although it is difficult to say with precise certainty if this is indeed the nature of the events that unfolded, it nonetheless makes for a compelling possibility!