Spanish evangelicals: “We lift our prayers to God for Barcelona”

“We identify with the pain of the families”, the Spanish Evangelical Alliance says. Churches, denominations and regional evangelical bodies also express their grief. 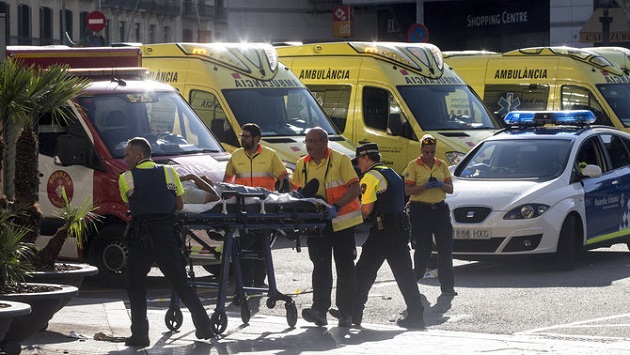 Spanish evangelical Christians are reacting to the terrorist attack in Barcelona in which 13 people have been killed and dozens injured.

On Thursday afternoon, a man drove his van into a crowd of people in the central touristic zone of Las Ramblas, killing at least 13 people. Authorities confirmed that it was a “terrorist attack”.

Read testimonies of two Christians after the attack.

The Spanish Evangelical Alliance expressed its “pain” and “condemnation” of the attack.

“The tragedy touches us in the deepest, and leads us to lift our prayers to God for the city of Barcelona”.

“We pray for the relatives of the victims and we identify with their pain”, the evangelical body said.

“In the midst of the tumultuous world, filled with violence and darkness, there is always hope in the Prince of Peace, who is Jesus”.

Later, the evangelical body issued a longer statement (read it in Spanish and Catalan): “We are part of this city who is trying to recover from the attacks. (...) We ask oursleves how we should respond to such a manifestation of evil. We must respond with the values that we can see in Jesus' life”.

“The gospel can transform our society and Christ's death on the cross for his enemies shows the way”, the statement said. Any “spiral of hate” is never a solution. “The Gospel shows us that the only antidote to evil is not more evil, but love”.

The Alliance calls to “pray for the Catalan church, so that it becomes a clear model of hope, faith and love” in Barcelona.

The office of the Evangelical Alliance is in the city of Barcelona. There are more than 80 people injured in hospitals in the region of Barcelona. Many citizens responded to the calls to give blood.

The Evangelical Council of Catalonia, based in Barcelona, said: "We call everyone to express their solidarity with the families of the victims of the terrorist attack in Barcelona. We must work together for peace and coexistence".

“PRAY AND WORK PROACTIVELY FOR PEACE”

The body representing Spanish Protestants to the government, the Federation of Evangelical Religious Entities (Ferede), said: “We express our clearest condemnation of the terrorist attack (…) as well as our solidarity with the victims and their relatives, our support of the government and the security forces working to stop the authors of these crimes”.

“As Christians, we encourage the members of evangelical churches, and of other confessinos, to pray and work proactively for peace and the coexistence in our areas of influence”, the Ferede added.

The statement closed: “We all know that these terrorist action seek to destabilise and divide citizens. We pray that, with the help of God, we may continue to be united, firm and full of courage, against this threat to our liberties, security and our lives”.

“WE BELIEVE IN THE RADICAL LOVE OF GOD”

Groups of churches and denominations also expressed their grief, such as the Federation of Assemblies of God in Spain. “We pray that God brings peace in the face of the threats of terrorism, and that he takes control of any spirit of violence and death”.

“This moment demands a strong unity in prayer. We profoundly believe that the radical love of God can eradicate the terror of hate”.

Many Christians in Bareclona city reacted to the attacks.

Some congregations held a prayer service just hours after the attack.

Several other churches in the city shared on Twitter their grief and prayers.

Published in: Evangelical Focus - cities - Spanish evangelicals: “We lift our prayers to God for Barcelona”