The Mayor of Rome, the ambassador of Germany and leaders of the Lutheran, Adventist and Evangelical denominations attend the event. AEI: “A step towards the full recognition of equal rights for all citizens, and thus also for evangelicals”. 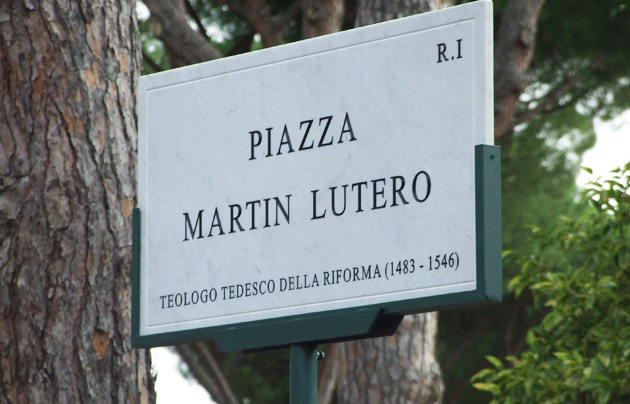 The new sign can be seen in the Park of Colle Oppio, in the centre of Rome. / S. Bogliolo

The “Piazza Martin Lutero” was officially named in the city of Rome (Italy) on Wednesday 16 October, in the presence of Mayor Ignazio Marino and the delegate for Culture and Sport, Giovanna Marinelli.

Journalists, photographers and cameramen of several media followed the event in the Park of Colle Oppio, just meters away from the Colosseum, Rome’s most prominent symbol.

The ceremony was introduced and chaired by Dora Bognandi, deputy Director of the department of Public Affairs and Religious Liberty Union of the Italian Adventist Christian Churches.

Several hundreds of people attended the event, including many believers and leaders of several local and national Protestant and Evangelical churches. 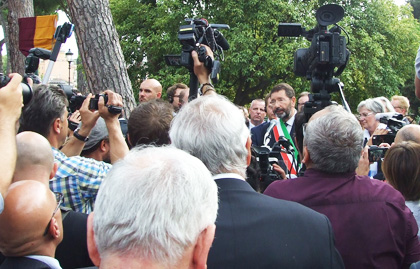 Mayor Ignazio Marino publicly thanked the former delegate for Culture and Sport of the city, Paolo Masini, who started the legislative process that led to this historic day.

The president of the Italian Federation of Pentecostal churches (FCP), Remo Cristallo, and the Italian Evangelical Alliance (AEI) district coordinator of the Central Italy Stefano Bogliolo were among the evangelical representatives attending the event.

Both the Adventist Churches and the Lutheran Church of Rome had sent in 2009 a request to the Rome’s toponymy Commission to name a street or a square honouring the German Reformer, coinciding with the fifth centenary of the Protestant Reformation, in 2017.

“A STEP TOWARDS FULL RECOGNITION OF EVANGELICALS”

Stefano Bogliolo, of the Italian Evangelical Alliance, commented: “Some of the speakers talked about the naming of the Piazza Lutero as a choice that encourages ecumenism. But our opinion, as some of the participants wanted to emphasize, is that this is simply a recognition by a state that claims to be secular of the right citizenship and equal dignity for all citizens of different cultures and religious sensitivities”.

Bogliolo said evangelicals “hope this will be a first step towards the full recognition of equal rights for all citizens, and thus also for evangelicals”.

Right-wing Italian political party FDI (Fratelli D’Italia) had created some controversy recently by saying that the new Luther square in Rome “is an insult to Catholics and the Jubilee”.