The Bible, which was printed in the first printing office of Gutenberg around 1455, can be consulted online at Gallica, National Library of France digital library. 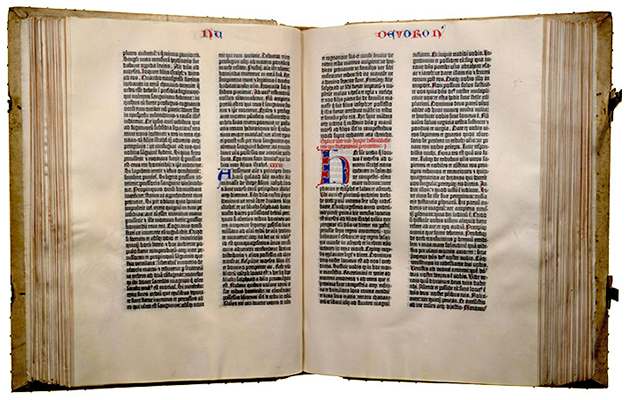 A copy of the Gutenberg Bible.

The Gutenberg Bible, preserved in the National Library of France (BnF), can be consulted online at Gallica, the institution's digital library.
"The two copies preserved in the BnF can now be consulted in Gallica. A summary have been added, to make the navigation of the biblical text more comfortable and to satisfy the needs of the researchers and the curious", the BnF said in a statement this Monday.

TWO COPIES OF THE GUTENBERG BIBLE
Digitized in high definition, the two copies of the Gutenberg Bible (only fifty are left in the world) were printed in the first printing office of  Gutenberg, with movable types, circa 1455.
The first copy (in four volumes), is one of the very rare and prestigious complete copies printed on parchment, magnificently illustrated when the book was made.
The second copy (in two volumes), printed on paper, has a great historical value, despite its more modest appearance (the first few pages are missing).

This second copy contains a handwritten note, dated 1456, which proves the date on which the Bible was printed. That is one of the few definite chronological proofs of the work of Gutenberg found so far.
Each page has delicate illustrations, and contains two columns of 40 lines, at first, and 42 columns later. The typography reproduces the Gothic letters of the copyists of century XV.

That is the most common version of the Bible at that time, the Vulgate, translated into Latin by St. Jerome and structured by the University of Paris in the thirteenth century.