Seven bishops ask the Vatican to stop what they believe is a “banalisation” of the Eucharist. Evangelicals see the decision of the Episcopal conference as a part of an ecumenical strategy. 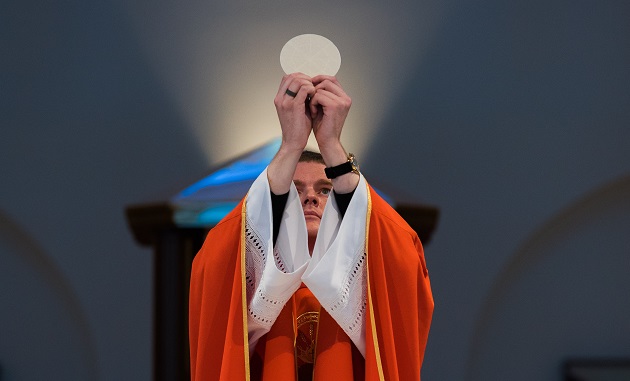 The German Catholic Episcopal Conference, headed by Cardinal Reinhard Marx, approved in its February gathering a proposal that has sparked a huge theological debate.

The 62 German bishops have voted to produce a guide on how to allow Protestants married to Catholics to receive Communion.

This non-Catholic spouses in “mixed marriages” could access the Catholic rite if they “affirm the Catholic Eucharist”.

The Intercommunion, the bishops said, would be a solution for cases in which “the spiritual hunger to receive Communion together (…) is so strong that it could threat the marriage and the faith”.

The President of the German Protestant Church (EKD), Heinrich Bedford-Strohm, welcomed the announcement as “an important step in our ecumenical path”.

Bedford-Strohm and his Catholic counterpart Reinhard Marx have been very proactive in sending pro-ecumenical messages during the commemoration of the 500 anniversary of the Protestant Reformation, in 2017, with calls to “heal the wounds of the past” and advance to stronger “unity” among the two Church institutions.

STRONG CRITICISM OF SOME BISHOPS

The open door for Protestants has been challenged by important Catholic sectors in Germany. Among them, seven German bishops that have written an open letter expressing their opposition to what they define as a “Protestantisation of the Church”.

In interviews with the media, some of the signatories have criticised what they believe is a “banalisation” of the “holiest Sacrament” of Catholicism.

Protestant taking part in the Communion would ‘de facto’ contradict the Protestant doctrines and its view of the Lord’s Supper. These bishops called the Vatican and Pope Francis to step into the debate.

Catholic media have reported in the last days that the Vatican’s Congregation for the Doctrine of the Faith would have sent a letter to the German conference asking to pause the proposal. It is not expected, though, that Rome will express this position publicly.

Evangelical leaders have also reacted with surprise to the moves towards Intercommunion. In an interview with German news agency Idea, evangelical theology professor Ulrich Körtner said it would be difficult for a Protestant believer to accept the Catholic doctrine of the Eucharist, which “includes the veneration of Mary as the Mother of God, and the intercession of the Apostles, martyrs and saints”.

The decision of the German Episcopal Conference can be understood as a strategy to attract Protestants to the Catholic liturgy. “I would not be surprised that someday other ecumenical formulas are presented to us to try to sell us that high prayers of the Catholic Eucharist are evangelical”.

MARX: COMMUNION NOT OPEN TO EVERYONE

Responding to critics, Cardinal Marx has said the final guide has not yet been published. Opening the Catholic Communion to Protestant spouses of Catholics, he added, would only be an option in “individual cases in which a thoughtful spiritual discernment would be needed”.