Grace and salt, vision and teamwork: 15 years of ‘Protestante Digital’

A bookshop in Barcelona hosted the event to celebrate the trajectory of the Spanish online magazine. It was a time of reunions, emotion and fresh commitment to the vision of building bridges between evangelical churches and society. 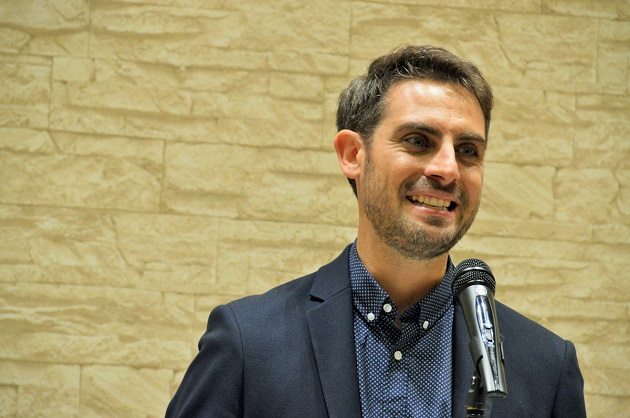 Protestante Digital celebrated 15 years in Barcelona on October 5, in a intimate event which took place in the auditorium of the Abba bookshop.

About 50 people turned up for the celebration, which looked back on how the project began, how it developed and how it came to be what it is today, and looked forward to the future.

Friends, contributors and members of the team had an opportunity to greet one another and to connect faces with names, which has not always been possible as the online magazine operates entirely on Internet, with contents produced by over 100 people based around Spain.

In a cordial, cheerful and convivial atmosphere, the event served as an opportunity to thank God for having made this project possible during the course of the last 15 years.

15 YEARS OF PROTESTANT INFORMATION ON THE NET

Pedro Tarquis, the founder of Protestante Digital, and its current executive director, could not attend the celebration due to a circumstance which prevented him from travelling to Barcelona at the last minute. Nevertheless, he sent his greetings by video.

“Vision became flesh”, said Tarquis with reference to the years prior to the founding of Protestante Digital. “It was Juan Antonio Monroy who succeeded in capturing God’s vision for evangelical media in Spain: professional, attractive, up-to-date, and looking outwards towards society rather than gazing at our own navel”, explained Tarquis, who was anxious to highlight two aspects of the magazine: “teamwork and Biblical worldview”. 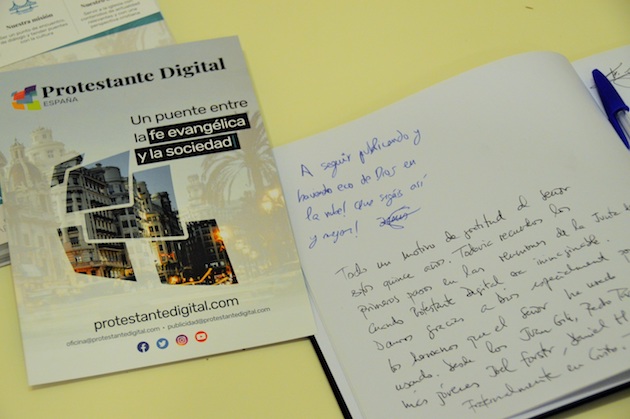 Tarquis stressed the enormous effort that many people had made to ensure that the project stayed on track and kept moving ahead, and the role played by the Spanish Evangelical Alliance, the driving force behind the project, who “have always respected our journalistic autonomy” and “have always intervened with great wisdom when it has been necessary”, which has been of “crucial importance” so that the news project could proceed on the principle that “nothing that is human is alien to us”.

Juan Antonio Monroy, another of the magazine’s founders and honorary president, could not be present either due to ill-health. Jonathan Soriano, editor of Protestante Digital, brought Monroy’s voice to the event. “Many people have accompanied us since the magazine was founded, they have made the project their own and have encouraged us to keep going: I would like to take this opportunity to reiterate my gratitude”.

The veteran writer and communicator said that the growth of this medium during recent years – now up to half a million visits per month – points to a “brilliant” future. “This magazine could influence the masses towards a specific purpose: to proclaim new-testament Christianity, and raise the dignity of the human being to a status that is in line with the Word of God”.

Daniel Hofkamp, director of Protestante Digital, presented a series of graphs illustrating the progress of the magazine, which will launch a design-change during the next few months. He also provided some figures: more than 18,000 published news stories, 16,000 opinion columns, 84,000 comments from readers... And a growing number of visits, amounting to a total of more than 7.5 million pages viewed during the last 12 months. “Protestante Digital gets visits from more than 190 countries every year”, Daniel explained. 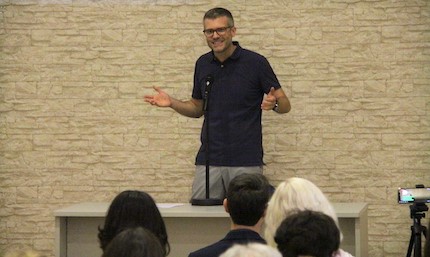 Next, Joel Forster, director of Evangelical Focus, explained the spread of the vision of the Spanish project throughout Europe through the creation, in 2015, of a sister media project in English. Joel informed us that in the last 3 years Evangelical Focus has been used by other media as a reference for news and evangelical opinion in Europe, and has been accessed by tens of thousands of users of English-speaking countries such as the USA and Australia.

SALT AND GRACE IN THE USE OF WORDS

Pablo Martinez, one of the founders of Protestante Digital, and renowned international speaker, psychiatrist and writer, was present at the celebration. Pablo contributed a reflection based on Paul’s letter to the Corinthian church, applying this teaching from the Bible to the field of journalism and communication.

“The secular press creates opinion”, it is a “pulpit”, Pablo Martinez pointed out, and for that reason, “the Christian media are called to be a mission point, and to proclaim our messages without blushing, just as the secular media proclaim theirs without a hint of embarrassment”. 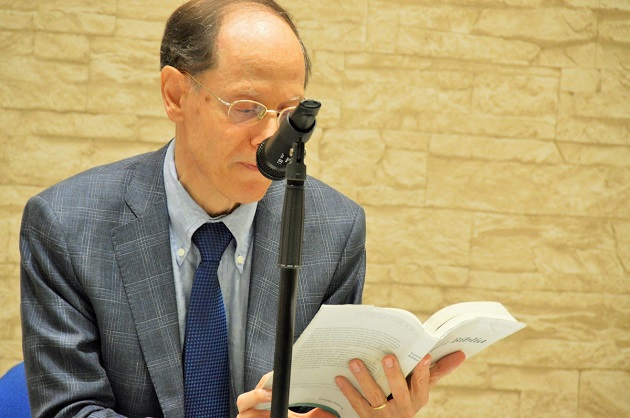 “We are called to be salt and light”, said Martinez. For this reason, Christians must “spread the word with grace seasoned with salt, two distinctive features of the pen of the Christian writer”, he added.

The Christian communicator must avoid the two traps that typically characterise today’s journalistic models: “Those that do nothing but attack, whose most prominent feature is their aggressivity”, “whose pen is a spear, and who lack grace, who fail to exhibit an empathic heart, an attitude that reaches out to embrace”.

The other model to be avoided is to “use writing as a form of psychological release”. While this might be legitimate up to a point, Martinez refered to such an attitude as “over-sentimental”. Writers who frequently adopt this tone are equally lacking in grace.

By contrast, the word, as used by the Christian communicator, must be aimed at edifying, building up. “Our individual aim must be neither to attack nor to relieve or emotions, but to build towards an ultimate aim which is not ours: we are collaborators in the kingdom of God”, argued Pablo Martinez.

Christian communicators must see reality “from the perspective of God”, so that our communication will always be constructive. “Sound words make for healing media”, he stated.

Pablo concluded by referring to the resources that we possess to carry out our task. “Protestante Digital is not a human enterprise: it is divine. We cannot build only with human resources”. Therefore “prayer is crucial”, it is the “essential element for every Christian project. Without prayer, there will be no blessing”, said Pablo Martinez.

The second resource is the “wisdom that comes from God”, which is “not the same as intelligence”, because “wisdom has to do with the way we live, and in the case of Christian media, they are a testimony oriented towards the outside”.

Thirdly, cooperation is a fundamental resource in taking on any enterprise. Pablo Martinez stressed the teamwork and mutual support that Protestante Digital exemplifies.

The speaker concluded with a quote from the theologian and journalist Carl F. Henry: “We must confront the world with an ethics to make it tremble, and a dynamic to give it hope”.

A TOOL FOR THE CHURCHES

Before concluding the event, Jaume Llenas, secretary general of the Spanish Evangelical Alliance (AEE), explained the relationship between Protestante Digital and the AEE, which has supported the media project from the very beginning. 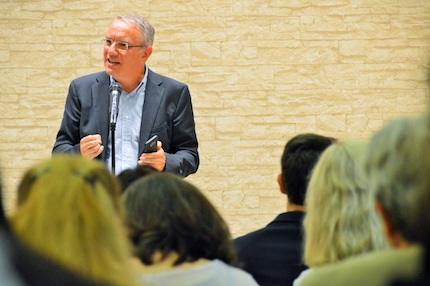 “Unity, mission and transformation are the Alliance’s watchwords” given that “mission is what makes it possible for us to be one, and this results in transformation in society:

“We must realise that we can impact the world with our work outside the dooors of our churches: Protestante Digital has been successful in achieving this during the last fifteen years”, he concluded.