Born in India, he spoke about Jesus Christ to thousands in over 70 countries. In March, the evangelist had been diagnosed with a rare form of cancer. 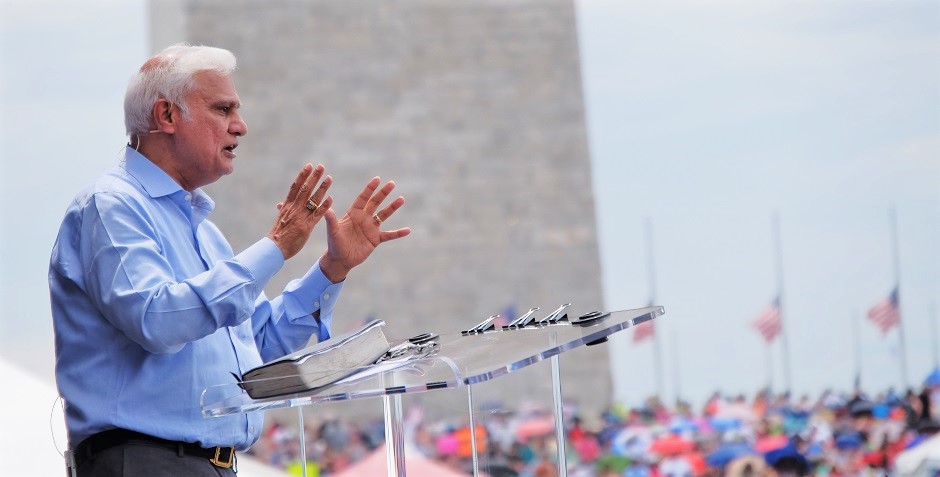 Ravi Zacharias addresses a crowd gathered on the National Mall, Washngton D.C. for Together 2016. / RZIM

Christian author and renowned evangelist Ravi Zacharias (1946-2020) died on Tuesday 19 May after a battle against a rare form of bone cancer.

“This morning, our beloved founder and apologist Ravi Zacharias went home to be with Jesus”, Ravi Zacharias International Ministries (RZIM) said in a message shared on social media and its website.

“He perpetually marvelled that God took a seventeen-year-old skeptic, defeated in hopelessness and unbelief, and called him into a life of glorious hope and belief in the truth of Scripture—a message he would carry across the globe for 48 years”, wrote the CEO of the organisation, Sarah Davis, who is also Ravi’s daughter.

Zacharias spoke in all kind of contexts throughout his life as a Christian apologist, from universities to business and political contexts. “It was his Savior, Jesus Christ, that my dad always wanted most to talk about”, wrote Davis. “Even in his final days, until he lacked the energy and breath to speak, he turned every conversation to Jesus and what the Lord had done”.

Michael Ramsden, President of RZIM and an international speaker, said: “Ravi saw the objections and questions of others not as something to be rebuffed, but as a cry of the heart that had to be answered”.

The verse “Because I live, you also will live” (John 14:19) will be etched on his grave stone.

The evangelistic ministry started by Ravi Zacharias grew to open offices in several countries (including European offices in the UK, Austria, Switzerland, Spain, Romania, and Turkey).

More than 80 speakers now work with RZIM and many of them were trained through the Oxford Centre for Christian Apologetics (OCCA) and the online courses of RZIM Academy.

The mission of the speaker, who authored over 25 books, was “helping the thinker believe and the believer think”.

Ravi Zacharias is survived by Margie, his wife of 48-years; his three children: Sarah, Naomi, Nathan, and five grandchildren.