Satanists set fire to many churches in Norway in the 1990s. Now churches are not attacked as often as they used to, and smaller denominations hardly ever experience church fires.

In Norway fewer churches have burned after the turn of the millennium than in the 1990s. In 2010 the church in Kopervik burned down to the ground. / Photo: Karmøy kirkelige fellesråd.

1992 was an annus horribilis for church fires in Norway. That year alone self proclaimed satanists set fire to at least five churches.

During the next few years several more attempts of arson were made by young men belonging to or identifying with the black metal wave.

One key figure spearheaded the so-called Satanic metal movement, a young man whose birth name was Kristian Larsson Vikernes. He later called himself Varg Vikernes – Varg meaning wolf – and was also nicknamed The Count. By 1994 he was convicted of both murder and arson of three churches. He served 15 years in prison before moving to France adopting the legal name Louis Cachet.

There were a total of 25 church fires in Norway in the 1990s, not all of them caused by arsonists, and not all of the arsonists identifying with satanism. Some fires were caused by electrical failures or lightning. Still two dozen fires or attempted arsons have been attributed to the black metal scene, although several incidents never proved to be connected to people from those circles.

At the turn of the millennium the picture changes significantly. Between the year 2000 and 2010 there were only eight church fires in Norway. The next ten years only seven.

A vast majority of the church fires have been in buildings belonging to the former state church, the Church of Norway. A bit less than 70 percent of the Norwegian population are member of Church of Norway, and their many local parishes own about 1,630 church buildings.

While the Church of Norway was hit by fire around 35 times between 1990 and 2020, not including failed attempts of arson, there were only two major fire incidents in so-called free churches during the same three decades. 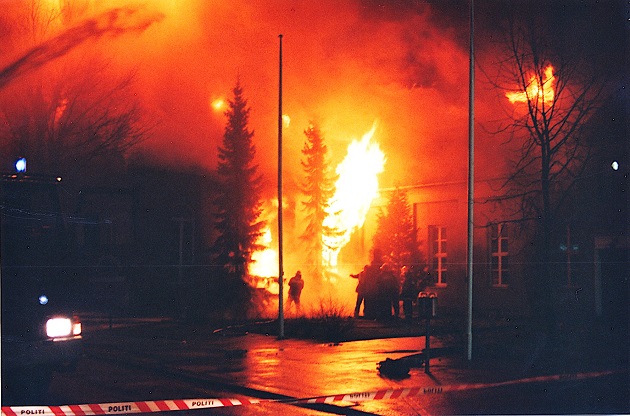 On Christmas Day in 1992, the Methodist Church in Sarpsborg, built in 1857, went up in flames. A smoke diver died in the attempt to extinguish the fire making this the only church fire with a deadly outcome in Norway in modern times. A well known satanist was suspected to have set the building on fire, but was never convicted.

On 4th June, 1995 Moe Church in Sandefjord, owned by Det evangelisk-lutherske kirkesamfunn (DELK), was burned to the ground. The investigation concluded that the fire started because of an electrical malfunction.

Police superintendent Kenneth Didriksen has taken part in investigations of church fires for many years. He confirms that free churches are seldom targeted by arsonists, and he thinks he knows the reason.

The overall picture however is that the number of fire incidents is going down. This is also reflected by the fact that the insurance company KA Kirkeforsikring is now paying money back to the parishes after several years with fewer fires.

After summing up last year KA Kirkeforsikring, who are dominating this segment of the market, paid back more than 890,000 euros in insurance premium, an equivalent of 29 percent of the total premium last year, according to figures presented to Christian press agency KPK. After 2019, 430,000 euros were paid back to the policyholders.

“When there isn’t much damage, the insurance money is not being used, so then we return some of the premium to our customers”, says director Knut Are Hole.