“Many atheists are beginning to see that their loud, aggressive attitude is not working”, says Mathematics Prof. John Lennox in an interview with Evangelical Focus. “We need to spend time to get to know Scripture at beyond a kind of Sunday school class level”. 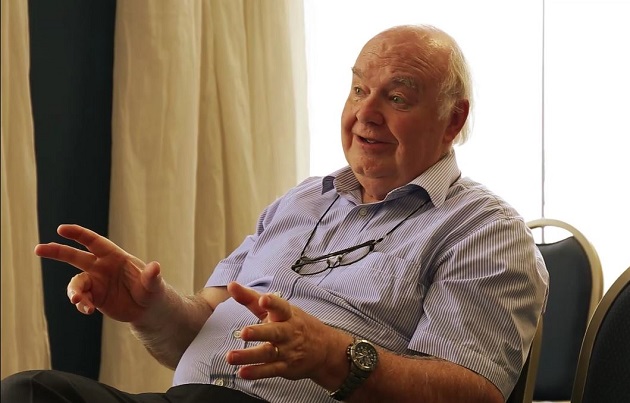 John Lennox, during the interview with Evangelical Focus, in Tarragona (Spain). / Luis Neira

In May 2016, Oxford Mathematics Professor John Lennox visited Spain to speak at the national ‘Apologetics Forum’ in Tarragona. There he had a conversation with Evangelical Focus, GBU Spain (IFES) and Fundación RZ.

The scientist reflected about the fall of the so-called New Atheism, the definition of ‘faith’, the importance of dialogue and the need of understanding the Bible.

You can watch the video interview at the bottom of the page. 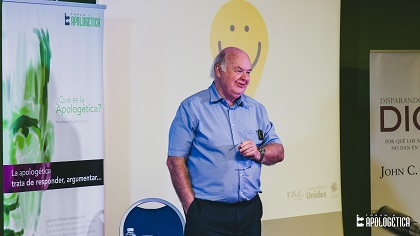 Question. What have you learned from all the public debates and personal conversations with atheists in the last years?

A. It was very interesting debating Richard Dawkins, Christopher Hitchens, Peter Singer and a number of other leading atheists. I suppose that Dawkins is unique because he is the angriest of them all, and I found it difficult to create any sort of relationship with him, like going out for a meal with him afterwards.

But with Hitchens, Singer and others, I could have a good conversation afterwards. So, during the debate they would be very tough with me, but then we could talk afterwards.

I suppose that the main thing I learned is the weakness of the atheistic arguments, but I knew that before I debated them, because I read all their books.

I take atheism seriously. The sad thing is that I find they do not take what I have got to say seriously. They have come to the conclusion, completely falsely, that ‘faith’ is a religious term and that it means ‘believing where there is no evidence’. So they meet me, I am a man of faith, which means I believe where there is no evidence. So, there is no point in discussing with me. That, to my mind, is a very cheap intellectual cop-out. It is sad, because it means that they are behaving as anti-intellectuals: they are not prepared to consider evidence.

It was an interesting experience. I do it because I think that if no one does it, they win by default. The public think they have everything, and we [Christians] have nothing. That’s the main reason for doing it.

I am very encouraged by the response, particularly on the internet. Many people have come to faith through watching these debates.

Q. There is a trend of authors called the “new” New Atheists, who believe Dawkins and others have been too aggressive. What do you think about this new friendly face of atheism?

I have many atheist friends who are academics in many universities around the world. And what is very interesting is that many would say to me: “Please do not confuse us with Richard Dawkins”. The problem here is that Richard Dawkins is very vocal, but he is representative of a small minority.

People say to me, “Why do you interact with him, since he is not completely representative”. And I say, “You are quite right, but he is the most influential”.

Most of my atheist friends are people who have a respect for the truth. They do not agree with me, but they respect my right to hold my views, and so we can have a discussion.

I think that many atheists are beginning to see that this loud, aggressive kind of attitude is not working.

I have had atheist people come and thank me for debating Dawkins, because they do not approve of what he says. So, we are probably moving back to a more sensible state where people can defend and argue the case for their own views in public without this aggression and militancy which is, of course, I believe, a sign of extreme weakness. 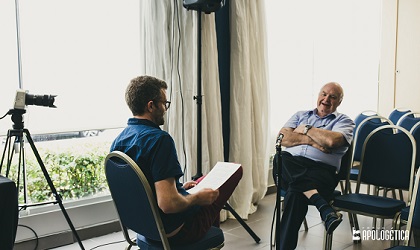 Q. Beyond the public debate of ideas, what things do Christians struggle most with when they talk about God to their friends?

A. Well, these discussions are in the realm of ideas, but ideas have consequences, huge consequences. And our worldview is shaped by this kind of thing. And if you are an atheist and I am a Christian, that difference will make a huge difference in the way we approach the basic questions of life.

The second thing is the consequences for morality. We are in a crisis in Europe and the West because we do not know anymore where morality comes from. If you reject God as the source of morality then you will have to find the morality horizontally in either raw genetics or social evolution and you end up inevitably in a huge subject devotion, where you choose your own values. That is disastrous, of course, because ultimately no society can function without some shared values. So, there are a lot of consequences.

As to the question about Christians struggling… The biggest struggle is fear of engagement. And I think that’s the result of not being taught by the past generation how to engage with the secular world. The only way to reverse that is to get people trained to do it, as is happening in many European countries, but far too late, so that they are constantly engaging.

We have to get across the idea that all Christians are to engage, not a special bright few, but everybody. The apostle Peter said that we had all to be ready to give answers to people who asks us. And it is very interesting that he is envisaging not preaching but dialogue. ‘Be ready to give an answer to someone who asks you’ is envisaging a dialogue situation.

So, we need to train Christians to enter into a friendly dialogue, but you cannot do that if you do not have friends. So, the first pre-requisite is to be friends with people who do not share your worldview. I started that, virtually, in my first few days in university, befriending people that do not come back from my background.

Q. What are the challenges and opportunities when sharing the gospel in your own context, the United Kingdom?

A. There are still a lot of opportunities among students. I gave a lecture a few months ago in the Sheldonian Theatre and it was completely filled with students, on, I think, a topic like “Science and God”. And, of course, I am in a rather unusual position because when I go somewhere, people have usually organised a very good group of people to come. So, I don’t have an overview.

But what I can say is that around the UK there is a huge interest among young people. An association that I am associated with, RZIM, when they organise a weekend on teaching the people to answer the big questions, it is always over-subscribed, absolutely packed. People want to know. So, I find that encouraging. There is beginning to be a shift.

And also, in many churches the pastors are very concerned because in their congregations they have people who are educated better than they are, who have big questions, and they cannot answer them. So they are looking for help too, that help is available. Slowly people are starting to realise: ‘well, we can do something if we get this kind of help’. 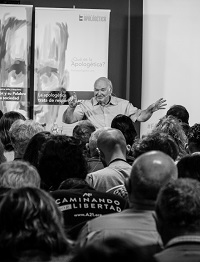 Q. You train Bible preachers across Europe. How do you think the Bible should be used in evangelism?

A. That is a hugely important question. Even the fact that you are asking the question shows me that there is a problem. That the Bible is over here and the culture is over there.

People treat the Bible as a source of spiritual encouragement or devotional help, which it is, that is wonderful. But what they fail to see is that Scripture takes the big questions of life seriously. And until you have seen that you will not be able to use the Bible.

Now, how do you use it? You have to be sensitive. Because if you simply say to an audience: “The Bible says this”, well… they shut their eyes and close their ears. But if you tell them it, without telling them where it comes from, they will be interested and will ask you: “Where does this come from”. And when you say: “Well, actually it is in the book of Daniel”, then it is too late, you got the idea across.

Therefore, we need to spend a lot of time - and it is a question of time and investment and commitment - to get to know Scripture at beyond a kind of Sunday School class level.

Let me analyse the problem in the following way. Our education moves at two speeds. And many people in Europe now are professionally educated and their education goes up very rapidly. If they are Christians, their knowledge of God and the Word moves like much slower, so there is a huge space. And when their colleagues up here start to ask them about deeper questions of life, they answer down here; the colleague sees the difference, and that is the end of the conversation.

So, the faith of the Christians up here [well educated people] becomes private. They do not know how to articulate it.

The only way you can do it is by engaging, but by asking more questions than giving answers. We have to listen to people in our society, find out what they think before telling them what we think.

Unfortunately there have been many Christians who have been told: ‘you must give them your message’. But we need to listen to them, get to know them as friends. They will appreciate it, the relationship will be much deeper, and therefore, your communication in the end, when you get the chance, will be much more effective.

Published in: Evangelical Focus - europe - “Europe is in crisis because we do not know anymore where morality comes from”