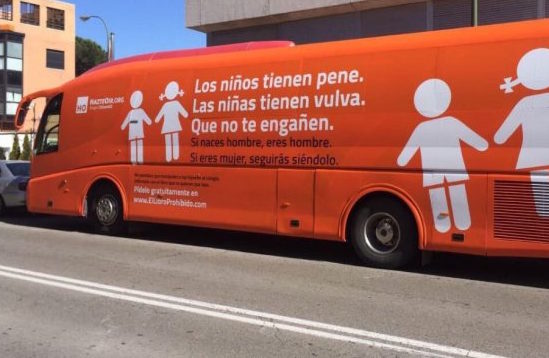 The bus of the campaign which has caused the controversy. / HazteOir

A campaign by Catholic group ‘HazteOir’ in favour of the traditional view of gender has created a major social debate in Spain. First-line politicians of almost all main parties have “condemned” the “bus of hate” that started to run through the streets of Madrid this week.

Earlier this year, a transgender association had propelled a campaign in the north of Spain which said: “There are girls with a penis and boys with a vulva. It’s as easy as that”. The media and some politicians echoed the initiative.

Now ‘Hazteoir’ launched a counter-campaign which said: “Boys have penis, girls have vulva. Do not let others fool you. If you are born a man, you are a man. If you are a woman, you will keep being a woman”.

The day the counter-campaign was launched, thousands of messages “condemned” the “bus of hate”, calling those who support the campaign “transphobic”.

Top national political representatives called the message of the campaign “brainless”, “miserable” and “hateful”, and defended the right of children to “choose their own gender”.

On social media, users called to “stone the bus” and “burn it down”, and have shared photomontages imitated the campaign with messages mocking Christianity.

Meanwhile, both the Mayor of Madrid (Leftist Manuel Carmena) and the President of the Regional government (Conservative Cristina Cifuentes) asked to ban the campaign.

The Attorney general brought the case to court, and a judge has temporarily immobilised the bus.

CAMPAIGNERS: “RIGHT TO EDUCATE OUR CHILDREN”

Ignacio Arsuaga, Director of ‘HazteOir’ said in a press conference that the campaign aimed to “denounce the impositions of gender ideology, which violate freedom of education and the fundamental right of parents to educate their children”. 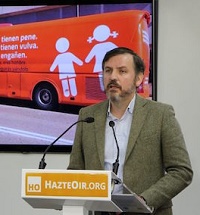 Responding to accusations of incitement to hate (a criminal offence), he said “we’re not offending nor discriminating people”, but describing “biological reality”.

Arsuaga also defended “freedom of conscience and freedom of speech, which are being threatened more and more by the gay lobby”.

Meanwhile, the Secretary General of the Spanish Evangelical Alliance (AEE), Jaume Llenas, called evangelical Christians and other citizens to avoid “emotional responses” and “anger which diminishes the capacity of reasoning”.

Although most evangelicals do not agree with the LGBT agenda on transgenderism, “a confrontation campaign which collides with others” is “not the best way to face the problem of gender ideology”, he said. 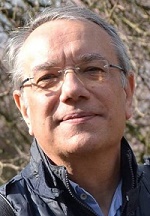 This said, Llenas defended the right of every person to publicly express their views on gender and sexuality. It is “worrying” that those who believe children are born with a certain gender (male or female), are now faced with “such an aggressive, visceral and unanimous reaction, which limitates freedom of speech”.

The AEE representative said the controversy shows that Spain “continues to be a society unable to dialog”, in where “the majority silences the dissidence”.

In the past, “the Church imposed their dogmas”, now “exclusive secularists do the same”, he argued.

FREEDOM OF CONSCIENCE VS. FREEDOM OF NOT LISTENING TO OTHERS

“The fundamental rights of freedom of conscience or freedom of speech, as well as other rights, are all being put under another kind of ‘greater right’, the right of not having to hear the opinions of others”.

“Every citizen (be it Christians, Muslims, secularists) should get used to the fact that others may disagree with them”, Llenas concluded.

Read the full interview with Jaume Llenas, (in Spanish).