Portugal: Church planting does not stop the decrease of evangelical churches

Evangelical churchgoers are 0.4 per cent of the population and in some regions believers are almost “invisible”. The average size of an evangelical church is 49 people, according to a study produced by the Portuguese Evangelical Alliance. 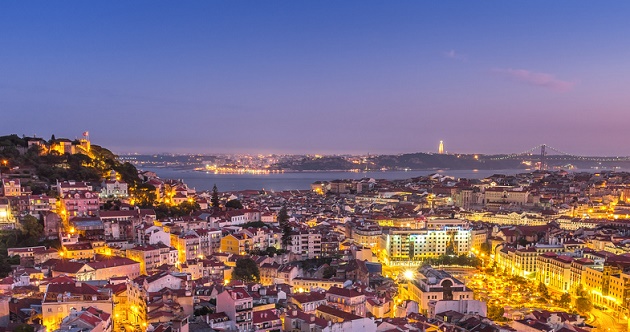 There are at least 46,900 evangelical Christians in Portugal. Most of these active church members live in the three biggest cities, according to a research conducted by the Mission Advisory Board of the Portuguese Evangelical Alliance.

According to conservative figures, Portuguese evangelicals represent 0.4 per cent of total population. Other statistics speak of up to 150,000 believers, which include many who are not active churchgoers.

One of the main reasons that explains the loss of believers is the return of migrants to their home countries. “The great growth in the beginning of the century was due to the arrival of returnees from the Portuguese former colonies, and the arrival of Brazilian immigrants”, the report says.

With this demographic change, many “ethnic churches” disappeared. This strengthened the general assumption that evangelicalism is an “imported religion” for foreigners, the Portuguese Evangelical Alliance laments in its report.

The strong secularisation of the country in the 90s and “the tendency of centralising all church activities in one place” are other factors that have led to the decrease of witness points across Portugal.

POPULATED CITIES VS. DISTRICTS WITH ALMOST NO WITNESS 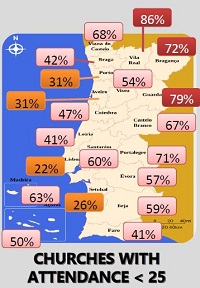 Faro is the district where there is a higher percentage of Christians, just below 1 per cent (0.94).

The average membership of Portuguese evangelical churches is 49 people. In rural regions like Vila-Real and Guarda the average is below 20 people per community, whereas in the big cities the average is above 50 people.

Since 2000, a total of 322 evangelical churches have been planted in Portugal, 21 new churches each year.

In Portuguese evangelical churches, there is an average of 5 baptisms per year. 39 per cent of the baptisms were carried out by churches planted after 2000.

One of the conclusions of the report is that churches in Portugal are too “dependant on foreign resources: human and financial”.

Nevertheless, 66% of the church leaders were born in Portugal.

“There is a clear need to be addressed in respect to the preparation of a new generation of leaders”, the report says.

MISSION IN OTHER COUNTRIES

Evangelical churches have sent missionaries to other countries, mainly to Spain, East Timor and Morocco. Some work has also been done with refugees.

But the 2016 report of the Portuguese Evangelical Alliance concludes that most churches do “not have any involvement in cross-cultural missions”. A big opportunity for the Portuguese church would be to work “with Muslims, due to the strategic geographical position of our country”.

Learn more about the work of evangelical churches in Portugal by visiting the website of the Portuguese Evangelical Alliance.

Published in: Evangelical Focus - europe - Portugal: Church planting does not stop the decrease of evangelical churches