Understanding Islam, at the core of France’s and Belgium’s public debates

Belgian newspaper Le Soir published in its weekend edition a magazine supplement on Islam. French schools debate how to teach the country's values. 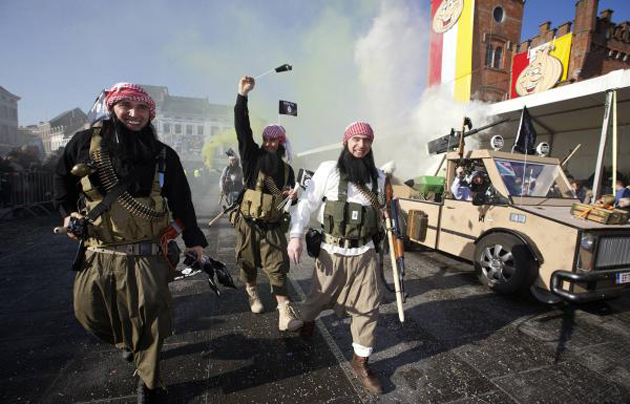 In the midst of the Media and political debate, Alost (Flanders, Belgium) authorized a jihadist chariot in its carnival parade. Other cities forbid them. / Le Soir.

The Belgian French-speaking newspaper Le Soir published in its weekend edition a magazine supplement on Islam. As its editor-in-chief wrote in the editorial, this is one of the first steps Le Soir is taking to understand Islam and Muslims better, acknowledging the need for a deeper understanding of the religion in order to explain recent events. While the media strive to find explanations for the attacks of last January, the debate focuses on the need to approach Islam from another perspective, with respect, getting to know the “Islam of the Enlightenment” (in a reference to the French “Age of Enlightenment”).

France and Belgium are at the heart of the news since the attacks on a magazine office and Kosher supermarket in France, and the death of two terrorist suspects in an exchange of gunfire with the police in Belgium. After the first “Je suis Charlie” reactions to the Paris attacks and a big stress on freedom of speech, both countries’ media have struggled to understand why it happened while trying to find solutions in order that it does not happen again.

Building bridges with Muslims and preventing “communitarianism” (a controversial term the media use to describe the voluntary isolation of a cultural group in order to protect its values) seems to be the solution alongside tough government action. So politicians are now discussing the loss of nationality and restrictions on freedom of movement.

However similar the debates are in both countries, a difference appears in France’s public arena where they cling to the French republican value of secularism. “Laïcité” appears in almost every news article on the matter and this maybe puts obstacles in the way of an open and free debate. State schools are targeted as the “place to” promote this value, as teachers are asked to instil the values of La République.

“My colleagues and I, we teach. Sometimes to ourselves”, a teacher writes in a comment in l’Obs, trying to explain how hard it is to teach values to an unresponsive audience. In the aftermath of the Paris attacks, over 200 incidents were recorded in schools of students refusing to participate in the minute's silence and an 8-year-old was interrogated by the police for defending the terrorist attacks.

But some raise questions. First of all on how relevant are some of these incidents in schools, since we are talking about kids and teenagers. And secondly, questions about how to approach those students that do not relate with French republican values nor identify with “Je suis Charlie”.

Published in: Evangelical Focus - europe - Understanding Islam, at the core of France’s and Belgium’s public debates