Spain surpasses 4,000 evangelical places of worship for the first time

Eighty-seven new places of worship have been opened in the last six months of 2017. There are now 4,045 evangelical premises throughout the country. 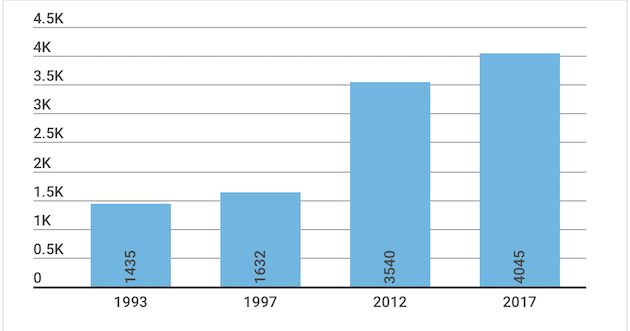 Number of evangelical places of worship in Spain by year, according to official data of the Observatory of Religious Pluralism. / Evangelical Focus

The semi-annual report of the Observatory of Religious Pluralism (of the Spanish Justice Ministry) on worship places in Spain, has just been published with data updated to December 2017.

The report shows that the opening of places of worship has kept growing like in the previous years. According to the data of the Observatory of Religious Pluralism, there are 4,045 evangelical places of worship throughout the country.

It is the first time in history that this figure has been reached. These governmental data include the places of worship of the Anglican and Adventist denominations.

There has been a sustained growth throughout the decade, despite the economic difficulties of the crisis and the obstacles that many congregations find when requesting permits for the construction or opening of their places of worship.

During the 8th Evangelical Congress held in July 2017 in Madrid, a detailed report was presented with the number of places of worship.

Dámaris Playá, coordinator of the evangelical database of the the Federation of Evangelical Religious Entities of Spain (FEREDE in Spanish), said there are 3,800 places of worship, a slight difference that, as she explained, is due to the different standards used to decide what is a place of worship, along with some errors in the official register of churches that the Ministry of Justice has.

The head of “In Depth Evangelism in Spain”, Máximo Álvarez, has also registered the growth trend "not only sustained, but on the rise", with figures similar to those presented by FEREDE.

"A church and a half is being planted in Spain every week, six churches a month, that is, 82 churches a year. The figures keep growing thanks to initiatives of church planting that are being carried outby churches and denominations”, said Álvarez in an interview with Spanish online news website Protestante Digital.

Additionally, the statistical report adds a review on the social action of religious minorities in Spain. In the section dedicated to evangelical social action, the report highlights the projects and the work of Diaconia, the social branch of FEREDE.