The Basque terrorist group announces its disbandment in Geneva. 853 people were killed and thousands injured in the Basque Country and the rest of Spain since 1968. 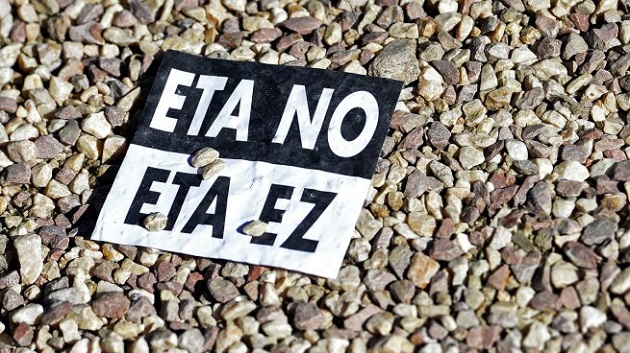 The signs against ETA, in Spanish and Basque language, were used in hundreds of demonstrations against violence. / AFP

Spain and the Basque Country experienced a historic day on May 3, as the terrorist group ETA finally announced its disbandment.

The criminal organisation killed 853 people in 50 years. The terrorist attacks also caused injuries to more than 6,300 other people.

The violence of this organisation has strongly shaped Spain’s society in the years of democracy. In a long-awaited final declaration made public in Geneva (Switzerland), ETA announced its “final and conclusive” disbandment. 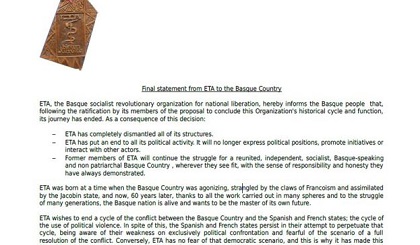 “ETA has completely dismantled all of its structures (…) and will no longer express political positions”, the group said in a recorded statement read by Josu Urrutikoetchea ‘Ternera’, one of the key historical figures of  the organisation, who is still on the run.

In what it described as “the final statement to the Basque Country”, the organisation said “the journey has ended”. No further initiatives are expected after this day.

ETA’s activities started in 1968, when the dictatorship of Francisco Franco was still restricting the freedoms of the population. Its members attacked political representatives - in the last years of the dictatorship and later during democracy. It also targeted police officers, business people and civilians. 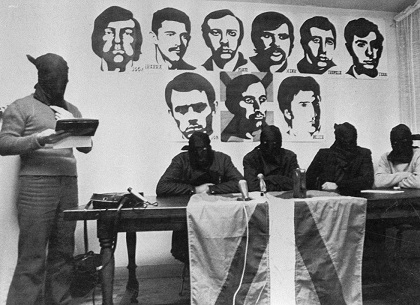 The terrorist group justified their actions in the name of the “fight for a free Basque Country”, a cause that had a strong support in the Basque Country in the beginning. As the transition to democracy helped the Basque Country to become an Autonomous Community with its own parliament, cultural recognition and executive powers, the violent ways of ETA were repudiated by a large majority of the Basque people.

Political parties such as the Christian Democrat Basque Nationalist Party (PNV), which condemned the violence of ETA, became the main representatives of the nationalist movement in the region. 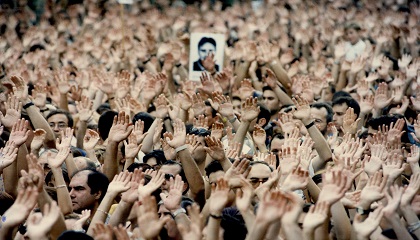 In October 2011, ETA announced “the end of violence”, an effective ceasefire. The action of the security forces had weakened the organisation and its popular support was at minimum levels, but the existence of the terrorist group was still broadly used by the political parties in Spain.

One of the key debates that has opened in the last years has been around the imprisoned ETA members. Relatives and seveal political parties have asked the Spanish state to put an end to ‘dispersion policy’.

Basque President Íñigo Urkullu (of the PNV) welcomed the end of ETA. He said the history of the terrorist band was a “black period” of history: “ETA should have never existed”, he said. Urkullu also hoped the Spanish government “will be sensitive to a change in the penitentiary policy”, allowing jailed ETA members to be brought to Basque prisons.

Spain’s President, Mariano Rajoy, reacted to the disbandment by emphasising that “there will be no room for impunity for the crimes”. “ETA can announce its disappearance but its crimes do not disappear nor do the efforts to pursue and punish them”, he said. Interior Minister Juan Ignacio Zoido, added: “After May 4, our police will continue to chase the terrorists wherever they can be found”.

Patxi López, former President of the Basque Country and member of the Social Democratic Party PSOE said: “The only dramatic conflict has been the existence of the ETA terrorist group, never the Basque people needed these bloodthirsty ‘saviours’”

Meanwhile, the pro-independence leftist party Bildu, often linked to ETA in the past, said: “Today begins a new era. It's time to take a step forward as a country”.

Thousands in the Basque Country and across Spain have worked for reconciliation in the last years. The deep wounds of the past will continue to need a profound healing.