Germany: ‘Atheist church’ is not a religion

The Constitutional Court says the Church of the Flying Spaghetti Monster should not have the rights of organised religions. 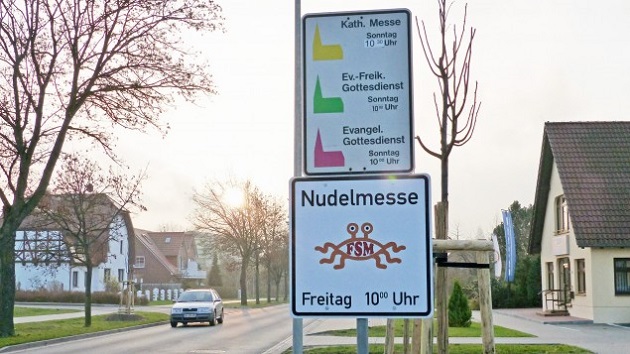 The Atheist movement had placed signs in some towns in Germany. / Picture Alliance, DPA

The Church of the Flying Spaghetti Monster is not a religion and therefore it has no rights of being treated as such, the Constitutional Court of Germany said.

The organisation, started by atheists to mock religions, has no right to have official signs in the entrance of cities and towns. In Germany, these signs next to some main streets inform about the location and times of the worship services of faith communities, such as Protestants and Catholics.

Challenging the law, the group had claimed their “worldview” had the same rights as religions such as Christianity. But the Constitutional Court supported a previous sentence of the Brandenburg Court, which said there was not enough evidence for such a religious worldview. The satiric imitation of Christian texts and symbols, it added, was evident.

The German “Pastafaris” have said they will now bring their case to the European Court of Human Rights, according to news agency Idea.

The Flying Spaghetti Monster groups started in the United States as a reaction against Christian churches. Their activities include the celebration of “Noodle mass” and the “Our noodle prayer”. Their fight for a religious status is part of their strategy to mock religion and promote an atheistic lifestyle.

Published in: Evangelical Focus - europe - Germany: ‘Atheist church’ is not a religion