Protestant Churches of Germany and England call for “unity” despite Brexit

In a joint statement, the Church of England and the Evangelical Church Germany (EKD) say their relationship “goes back over many centuries - long before the European Union”. 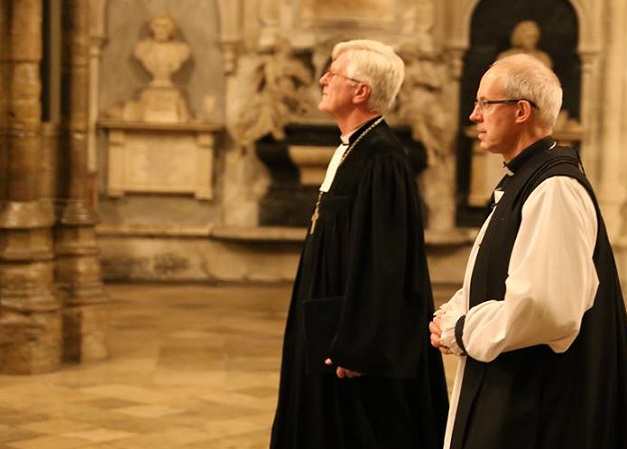 Justin Welby, Archbishop of Canterbury and head of the Church of England (Anglican Communion) welcomed Heinrich Bedford-Strohm, Chair Bishop of the Evangelical Church Germany in London.

After the visit, the two Protestant leaders issued a statement commenting on the Brexit negotiations and the future of Europe.

The shift in European politics is addressed by the authors. “We witness the rise of populism and the emergence of extremist political parties which are being successful at the ballot box. Some of the old certainties are not so certain any more. European relationships are changing, not least as a result of Brexit”.

The UK and Germany “have a history of war between us but also a history of the search for lasting peace”. In this context, “as some politicians and political forces seek to drive a wedge between people it is all the more important that the churches continue to strive for reconciliation and to speak out prophetically for a Europe where the values of human rights and human dignity are central”.

Our world needs a better future than one based in hatred and division. It's the task of the church to bear witness to the love of God, across borders, as sisters and brothers in Christ.

THE DUTY OF CHRISTIANS

The two historic churches ask “all politicians to find fair and sustainable solutions for the future coexistence of the UK and the EU”.

The taks of Christians, Welby and Bedford-Strohm, is to understand that “Europe is changing but the Church of God remains constant in its witness”.

The “duty of Christians” is “to work for unity and understanding and to build bridges between nations and cultures for the good of humanity, in the service of Jesus Christ”.

Published in: Evangelical Focus - europe - Protestant Churches of Germany and England call for “unity” despite Brexit