The most important trial in 40 years of democracy is expected to deeply affect national politics. President Sánchez might call for an early election. 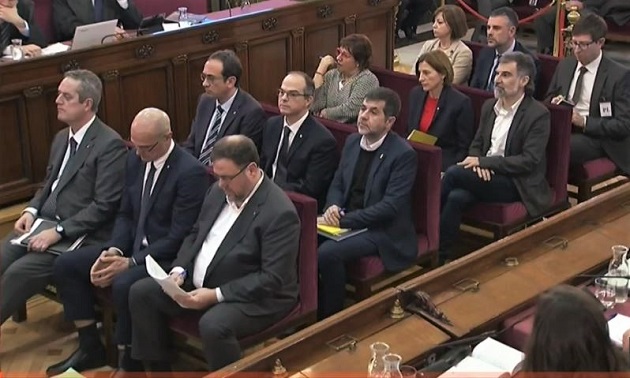 The twelve defendants at the Spanish Supreme Court, as the trial began on February 12, 2019. / Livestream Supreme Court

The criminal trial against 12 Catalan pro-independence leaders started in Madrid (Spain) on February, 12.

Former Vice-President Oriol Junqueras and other former members of the Catalan government, the former President of the Parliament of Catalonia, and the leaders of the two biggest civil society pro-indepence organisations, are sitting on the bench of the Supreme Court.

Former President of the Catalan government and main leader of the unauthorised independence referendum and the unilateral declaration of independence (both on October 2017), Carles Puigdemont, fled Spain and is in Belgium.

The public prosecutor accuses the defendants of rebellion (a violent uprising) and misuse of public funds during organisation of the illegal vote. The defendants say they are suffering a political trial. They could be charged with up to 25 years in prison.

Nine of the Catalan separatist leaders have been in pre-trial imprisonment for 15 months.

More than 600 witnesses will be called to declare, including former President of Spain Mariano Rajoy. The trial will be boradcasted live on many media.

A KEY MOMENT OF SPAIN’S DEMOCRACY

The head of the Supreme Court said this is the most important trial in Spain’s forty years of democracy. The Catalan independence crisis has led to massive protests in Catalonia, where surveys say the population is split between those who want to see an independent Catalonia, and those who want to continue in Spain – with several degrees of autonomy.

President Pedro Sánchez (Social Democrats) has been severely criticised by the opposition as his government tried to start a dialogue with the new government of Catalonia, still led by separatist parties after the December 2017 election.

PP (Conservatives) and Ciudadanos (Centre-Liberals) have rallied in the streets asking for a new imposition of the Article 155 of the Spanish Constitution to stop any new attempt of the Catalan Parliament to make new steps towards secession.

President Sánchez, who depends on the votes of Podemos (leftist party) and the Catalan independence parties, could call for an early election. The trial of Catalan separatist leaders is expected to finish before the end of April, but an electoral campaign during the trial would lead to an even stronger socio-political tensions.

The European election in May and the appeals to the European Human Rights Court will most probably turn the Spanish crisis into a European issue.

Evangelical Christians in Catalonia and the rest of Spain are not alien to the conflict. No denomination or evangelical organisation has taken sides on the conflict, but many have called to pray for the situation and dialogue in the midst of growing tensions.