According to the Observatory for Religious Freedom and Conscience, these incidents grew by 20% in 2018. 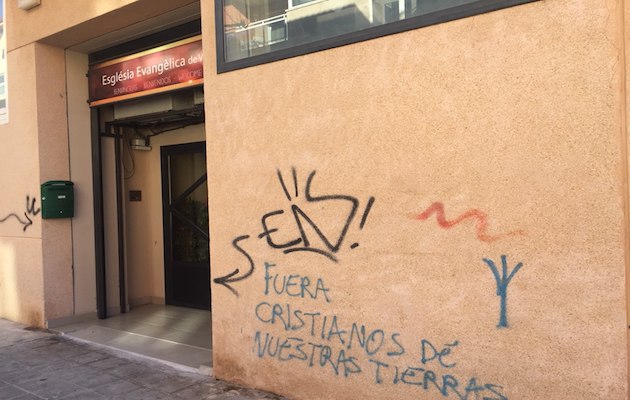 Graffiti on the walls of the Evangelical Church of Valls, in Catalonia in 2018. / Facebook Esglèsia Evangèlica de Valls

Attacks on religious freedom have increased in Spain.

According to the “Report on attacks on religious freedom” published this month by the Observatory for Religious Freedom and Conscience, there have been 53 attacks in 2018.

The report clasifies the attacks on religious freedom in five categories, the most serious being those that have to do with violence against people and, secondly, the attacks against places of worship: graffitis, damages and robberies mainly.

They have also included what they define as attacks of “belligerent secularism”, like the “vexatious expressions” that have taken place in a public arena, and come mainly from local and regional governments, as well as from political parties or secular entities.

There was only one case of physical violence due to religion. This attack took place on August 14 in the Spanish region of Murcia, where two young people were arrested for assaulting a group of young people wearing T-shirts of the San Antonio Catholic University.

However, the attack against places of worship have significally grown.

The report informs about acts of vandalism such as graffiti, destruction of facades and windows, desecration, robbery or attacks with homemade explosives.

These aggressions have increased by 20% in comparison with 2017, when threre were 44.

The report emphasizes that many of these attacks took place during the demonstations of the Working Women's Day, on March 8.

The majority occurred in Catholic temples. The only recorded case that had to do with an evangelical place of worship was in the Evangelical Church of Valls, in Catalonia.

There were also offensive graffiti attacks in 5 mosques across Spain.

The report concludes that “religious freedom is threatened, because the fear of manifesting one's beliefs grows”.

“It is important to work to protect a religious freedom that not only benefits believers, but also favors the whole society by promoting peaceful coexistence among citizens”, the repots says.

Furthermore, they ask political parties “to respect the right to religious freedom, both from the individual point of view and from the collective point of view, as well as the agreements signed with the different religious confessions”.

“Secularism does not mean the elimination of all religious symbols and banning citizens from practicing their religion in public, it means respect”, the group added.