“We want to collaborate more with other churches, but language is a barrier”, say pastors of the Chinese Christian Churches. 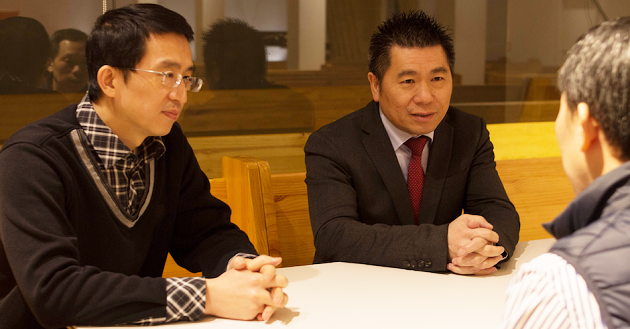 Pastor Rongen Li with Zhengbo Chen, president of the Chinese Christian Church in Spain, in one of the church premises in Barcelona. / Jonatán Soriano

This is the third and last in a series of articles about the Chinese Christian church in Spain. Read the first and the second articles.

The Chinese Cristian Church in Spain was founded during the second half of the 1980s.

Rongen Li, pastor of a community in Gran Via, Barcelona, tells us that his father was involved in establishing the organization, which today includes 34 congregations across the country and represents more than 7,000 members.

Together with other members, Li reminisces about the beginnings of the community when they used to hold services in restaurants and local businesses belonging to the first generation of immigrants that arrived in Spain.

“The first arrivals came due to economic difficulties”, says Rebecca Sun, who helped to interpret my meetings with those responsible for the Chinese Christian Church in Spain. “They came with the objective of finding a job; that’s the reason why they have dedicated more time to establishing themselves in the country economically rather than academically”, she adds.

The strong, separate cultural identity of this community has meant they face a series of challenges to improve integration and fellowship with the rest of the evangelical population in Spain. “We hope that our younger generation, since they don’t have a language barrier, will be able to join the rest of evangelicals here”, says Koikam Fu, pastor of a church in Barcelona. “At the moment we feel some disconnection due to the language”, he adds.

Those responsible for the Chinese church in Spain perceive that, of all the cultural differences, language is the most evident reason for the wide gulf between the Chinese and the local communities. “We would like to collaborate more with the Spanish churches, but our lack of language proficiency makes it difficult”, admits Li. “That also makes it difficult for us to understand your beliefs and teaching”, emphasizes the pastor. “It is a matter of making sure that what we believe and teach is the same as you”. “That is why being bilingual is important”, underlines Sun.

Becoming a bilingual community is therefore a major objective for those who lead the organization of Chinese churches in Spain.  President Zhengbo Chen indicates that they have already experienced some shift.  “Although we don’t have a formal relationship with other evangelical churches, we have had some connection, like in Manresa, where we have held evangelical events and bilingual services with other Baptists. In Santa Coloma de Gramanet we have a church whose pastor is Spanish. On a different occasion we held a national youth camp where the guest pastor was a native”, he explains. Li also tells us that a group of Hispanic people, led by a Colombian missionary, use his church to meet up.

However, both recognise that there are not many examples and that they need to work on their relationship with the Spanish church from a wider point of view. “We are now promoting a second generation of bilingual pastors, who speak both Spanish and Chinese. We believe that having both languages available in the church is the way ahead”, points out Chen, whose personal wish is to be able to lead services in Spanish too. 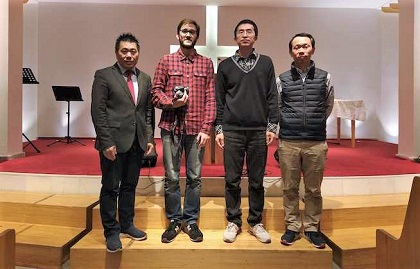 PASSING THE BATON WITH HOPE

Those responsible for the Chinese Christian Church in Spain are putting their hope in the younger generation, so that they can overcome the language barrier and integrate with the established evangelical church. Sun, with proficient Spanish and careful pronunciation, is translating our conversation. She is part of the younger generation for whom the cultural distance has been reduced. “When I arrived in 1993 there were free lessons for foreigners in both Spanish and Catalan. That’s why we have integrated better. When we arrived in Spain, our parents concentrated on employment, meaning we could study. Now we have a normal life”, he says.

Up to now, Chinese Christian Church communities have carried on delivering Sunday school in Chinese so that “the kids don’t lose their mother tongue”. At school, children are taught in Spanish or the regional language so they hope that this strategy will provide a generation of bilingual leaders who can facilitate the relationship with the rest of churches in the country. “The idea is to have our own pastors with a good level of Spanish”, Chen says. “This is something we must face up to because our young people understand Spanish better than Chinese”. The Chinese Christian church Leaders in Spain therefore point to co-operation with the Chinese seminary ICBSIE, which arose from a collaboration between the Chinese seminary of Taiwan and the Spanish inter-denominational Bible College IBSTE.

‘OUR STUDENTS ARE ADAPTING WELL TO THE COVID-19 SITUATION’

“The ICBSIE has recently decided to use online teaching for all its courses this semester to prevent the possible expansion of the coronavirus”, explained William Liao, president of the seminary, to Protestante Digital. “Students are happy to learn from home and, that way, they won’t be at risk of infection”.

Referring to the present situation, Liao’s view is “the whole world has no option but to slow down, as God has brought in an unexpected big pause. This selah is significant for the whole church and for individual Christians”.

The seminary has already started to deliver its daily devotionals, meetings and individual counselling through the net, in order to maintain, by any means, “spiritual development in this difficult situation”. “Our students have adapted to the new situation remarkably well”, says Liao.