It is the first Norwegian denomination outside of The Church of Norway that condemns attitudes and actions that have inflicted violations, injuries and suffering on LGBT people. 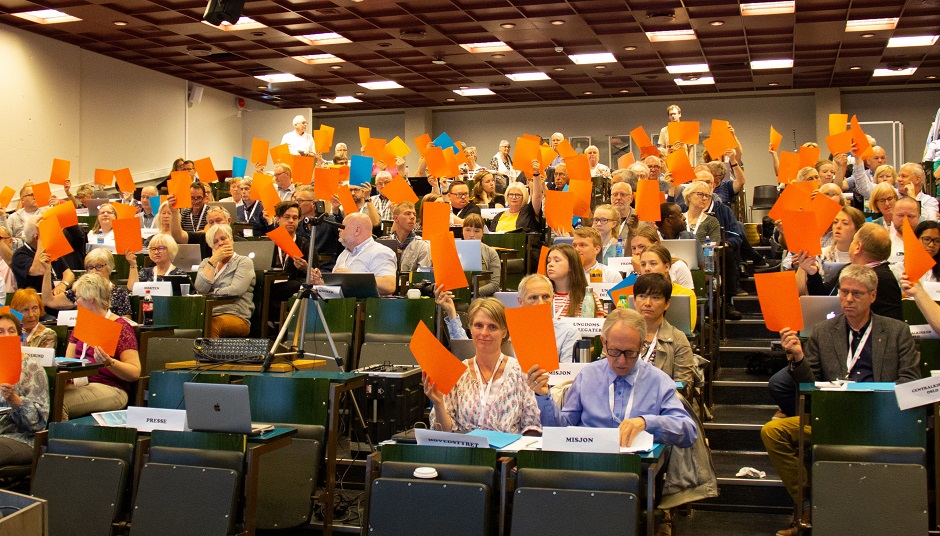 At the annual conference in 2019, the Methodist Church in Norway decided that the faith community should start a process on a path towards an inclusive view of human sexuality. / Photo: Ingunn Marie Ruud, KPK

On 21 December, 2020, this historic statement was published on the Methodist Church's website: “The Methodist Church in Norway admits and apologizes for the condemning attitudes and actions that have inflicted insults, harm and suffering on LGBT+ people instead of dignity”.

It added: “This is contrary to the gospel of God's unconditional grace and love. Every human being is created in the image of God and loved by God”. [translated from Norwegian by KPK]

The apology has been formulated by the main board of the Methodist Church in Norway after the Annual Conference decided that such a statement was appropriate.

The head of the main board, Audun Westad, told the Methodist Church's magazine Brobyggeren that it is with sorrow that they acknowledge that they as a church have hurt others.

“We have not been able to offer the security people should be able to expect”, he said. “Therefore, it is necessary that we as a church just take a stand on this and sincerely apologize and forgive”.

Westad said he was proud of the representatives of the denomination, which take such a stand against its own history and dares to say that they as a church have not behaved well enough, and in some cases also behaved hurtfully.

Westad told KPK that they have already received many reactions to the statement on Tuesday morning. “The most important feedback comes from those who are directly affected by the case. The reactions here have been good”.

The chairman of the board added that several have emphasized the clarity of the apology and appreciated that it does not take any reservations.

Has anyone who identifies with a LGBT identity been involved in formulating the apology? “Yes, it has been an important part of it for us that everyone is involved in the process. We can not only talk about people, but must talk with the people involved”, Westad explained.

Part of a larger process

At the annual conference in 2019, the Methodist Church in Norway decided that the religious community should start a process on a path towards an ‘inclusive’ view of human sexuality.

“This apology comes as a natural step in the process we are in now”, Westad advanced.

Worldwide, the Methodist Church is divided on the issue of homosexuality. At the International Extraordinary General Conference in 2019, a more conservative line was chosen by a narrow majority. It is expected that this could lead to a split between liberal and conservative Methodists.

“Different things are happening worldwide in our church now. This apology and our process must be seen in connection with this”, said Westad.

In the United States, there are several Methodist churches that have made similar apologies to LGBT+ people as the Methodist Church in Norway have now done, but Westad has not heard of others in Europe.

“I am not one hundred percent sure of this, but I think we are the first Methodist church in Europe to issue such an apology”, says Westad.

Only a few weeks ago, the Norwegian Baptist Union also voted on their stance on LGBT matters, specifically, on same-sex marriage. Contrasting with Methodists, the Baptists upheld their theologically conservative position stance on marriage.