A call for prayer on Ukraine’s Independence Day 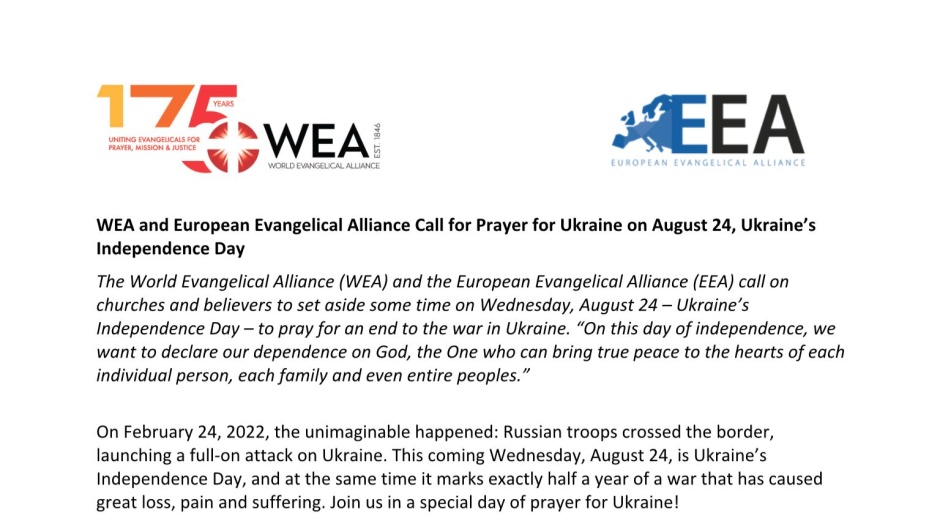 The WEA and EEA 2022 prayer for Ukraine.

“On this day of independence, we want to declare our dependence on God, the One who can bring true peace to the hearts of each individual person, each family and even entire peoples”.

On February 24, 2022, the unimaginable happened: Russian troops crossed the border, launching a full-on attack on Ukraine.

This coming Wednesday, August 24, is Ukraine’s Independence Day, and at the same time it marks exactly half a year of a war that has caused great loss, pain and suffering. Join us in a special day of prayer for Ukraine!

Pray for an end to the suffering

Over the past six months, millions of Ukrainians have been displaced within their nation or fled abroad, with many families forced to separate from each other.

Thousands of soldiers on both sides have been killed, leaving tens of thousands of family members grief-stricken and wondering why their relatives had to lose their lives in a war they did not ask for.

Pray for the global repercussions to cease

The effects at the global level continue to be felt as millions of the world's poorest people are threatened with starvation.

Although there have been some signs of hope with the recent agreement to allow the export of grain from Ukrainian ports, the situation remains a great concern.

Let us pray that the grain can make its way to the places where it is needed most, so that the most vulnerable are not suffering further consequences of a war that may be half a world away.

Pray for the response of the evangelical community to continue

The response of the evangelical community within Europe and across the globe has been heartening. There has been an incredible outpouring of support from near and far: sacrificial offering of goods, funds, prayers and hospitality.

Many people open their own homes to those who fled, the majority from Ukraine but also those from Russia and Belarus who reject the war and had to flee to neighboring countries.

The needs remain great, so let us pray for the hospitality, solidarity and support to continue.

Pray that peace is not sought through weapons but through prayers

As of now, there is still no end in sight for this war as the Russian government refuses to withdraw its forces and Ukraine must defend itself.

While the world may continue to look for weapons to bring about peace and justice by force, we know that true and lasting peace can only be accomplished through unceasing prayers.

As we look to Jesus Christ, the Prince of Peace, let us pray for hearts to be changed and for the weapons to be silenced.

Throughout history, God has changed hopeless and dire situations in surprising ways, and He can do it once again.

And let us also pray for healing and for reconciliation, and that Russia and Ukraine could live in peace as independent, sovereign nations.

We invite children to join the day of prayer. Families can use the kids-friendly prayer guide. It is available for download here.