“State schools are not churches”

The Italian Evangelical Alliance supports a teacher who did not allow the celebration of a Catholic mass service during school hours. 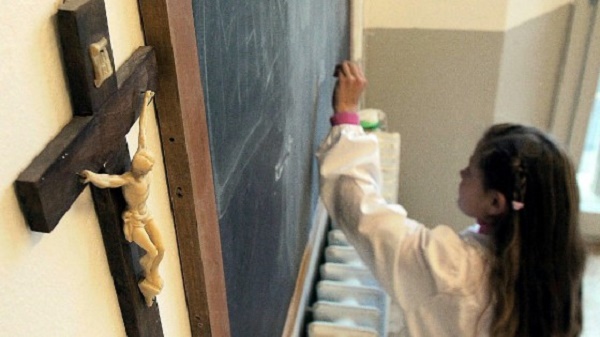 State schools should not be used for religious means in school hours, evangelical Italians say. / Repubblica

Evangelicals in Italy have expressed their “solidarity” with a public school head teacher who refused to give permission to celebrate a Roman Catholic mass in school hours.

The L’Espresso newspaper had reported about the case in Domodossola (Northern Italy). The director of a public centre there decided to apply the law and prevent the religious service from happening.

The decision caused a controversy, but the Italian Evangelical Alliance (AEI) believes the teacher acted well.

NEUTRALITY IS NOT ANTI-RELIGIOUS

“Some have not yet understood the fact that applying the laicity of the state does not mean to act against religion, and not even against the public role of religion in a plural society”, the AEI said in a statement.

Living  in a lay state, the AEI continues, means that “state schools are not a suitable place for religious celebrations of any faith during school hours. Religious celebrations can be freely promoted elsewhere and if someone wants to use the school building, they can do so outside of the school planning. Overlaying religious activities and school activities in state schools violates a basic principle for a plural society”.

“COMPLETE SOLIDARITY”
The evangelical representatives express their “complete solidarity” with Dr. Chiara Varesi, the Domodossola head teacher “for respecting the secular nature of the state school”.

The Italian Evangelical Alliance “has always promoted a vision of an open and plural society, where religious freedom - the mother of all freedoms - is fully recognised in all its expressions”.

“All religions should be equal before the law”, the organisation believes, and “the task of the state school is not to become a temple, a church or a place of worship”.

UNJUST CRITICISM COMES OUT OF “IGNORANCE”

The controversy in Italy following the teacher’s decision shows “the ignorance of certain critics” who “do not understand” the fact that there are other religions in Italy besides the majoritarian Roman Catholicisim, the AEI expressed. These smaller faith communities are “part of the social history of this country”.

“In Italy we still live in a framework of laicity that is unfinished”, the statement continues. “The teaching of Catholic Religion, paid by all taxpayers, but whose teachers are chosen by the Catholic bishops, is a clear contradiction”, because “state schools should not impart any religious teaching; this important responsibility belongs to the families, churches and religious groups”.

The AEI concludes: “Religious freedom, the end of the power of one religion in the secular space, and a real laicity are still goals to be achieved in our country”.

Published in: Evangelical Focus - family - “State schools are not churches”