The population of Spain and Italy might halve by 2100, study says

A research of the Institute for Health Metrics and Evaluation forecasts world population to shrink after mid-century. “The solution are open migration policies and social measures to support families”. 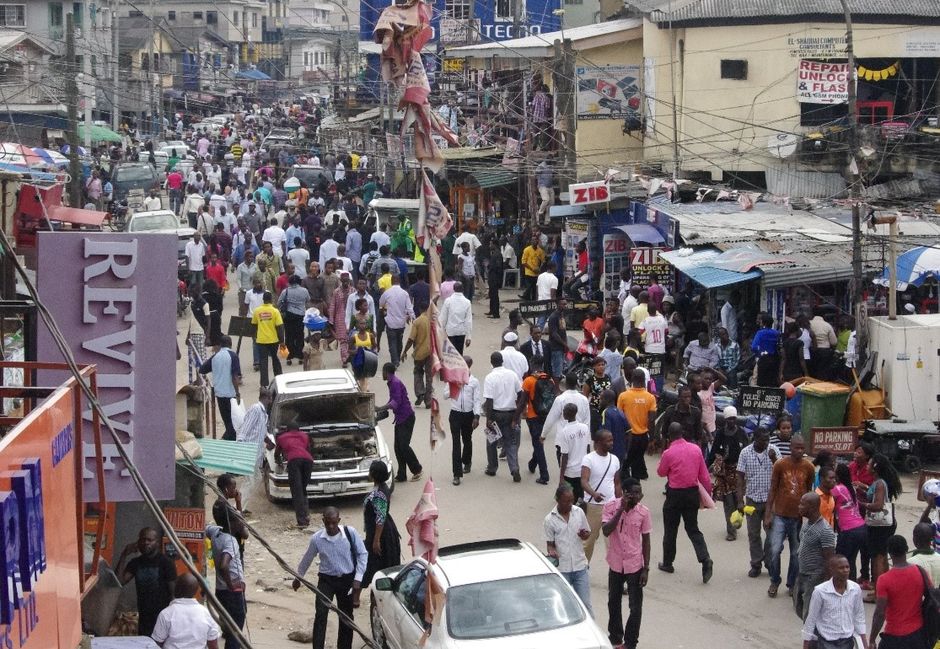 A market in Laos,Nigeria, the only country among the world’s 10 most populated nations to see its working-age population grows over the course of the century, study says. / Ventures Africa

According to a new study published the in scientific magazine The Lancet, “world population will likely peak in 2064 at around 9.7 billion, and then decline to about 8.8 billion by 2100,  2 billion lower than some previous estimates”.

Using data from the Global Burden of Disease Study 2017, the researchers from the Institute for Health Metrics and Evaluation (IHME) estimate that “183 of 195 countries will not have total fertility rates (TFR) high enough to maintain current populations without liberal immigration policies by 2100”.

The report says that “improvements in access to modern contraception and the education of girls and women are generating widespread, sustained declines in fertility”.

It also predicts huge shifts in the global age structure, with an estimated 2.37 billion individuals over 65 years globally in 2100, compared with 1.7 billion under 20 years. The number of children under 5 will decline by 41% while, those older than 80 are set to increase six-fold.

The population of 17 European countries will drop significantly by 2100

The study “forecasts the five largest countries in 2100 to be India, Nigeria, China, the USA, and Pakistan. However, these forecasts showed different future trajectories between countries”. 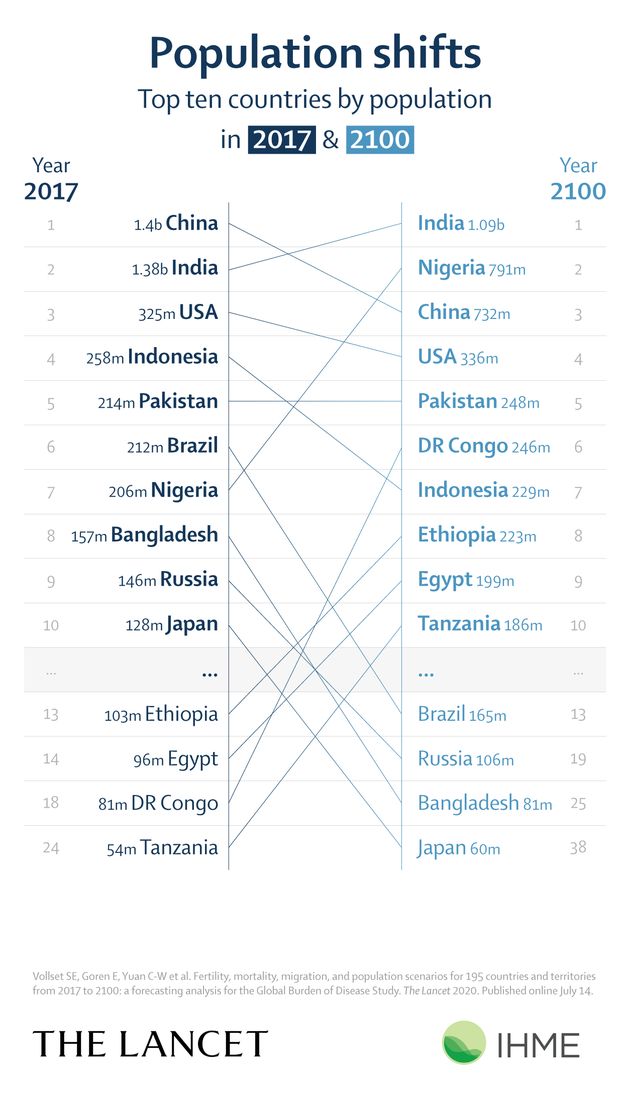 “While the UK, Germany, and France are expected to remain in the top 10 for largest GDP worldwide at the turn of the century, Italy (from rank 9th in 2017 to 25th in 2100) and Spain (from 13th to 28th) are projected to fall down the rankings, reflecting much greater population decline”, it adds.

The population of 17 European countries will drop significantly by 2100, with Latvia being the European country “predicted to experience the largest relative decrease in population from 2017 to 2100 (78%)”,researcher pointed out.

Meanwhile, “Poland is modelled to fall from 38 million to 15 million, while Portugal is said to face a drop from 11 million to 4.6 million”.

Bosnia, Bulgaria, Croatia, Greece, Romania, Serbia, Slovakia, Slovenia, Lithuania, Moldova and Ukraine are the other European nations to face a drop of at least roughly half.

“Africa and the Arab World will shape our future”

Furthermore, “Africa and the Arab World will shape our future, while Europe and Asia will recede in their influence. By the end of the century, the world will be multi polar. This will truly be a new world, one we should be preparing for today”, Richard Horton, editor-in-chief of The Lancet, said.

The study explains that “the population of sub-Saharan Africa is anticipated to triple over the course of the century, it is likely to become an increasingly powerful continent on the geopolitical stage”.

“Nigeria is projected to be the only country among the world’s 10 most populated nations to see its working-age population grow over the course of the century (from 86 million in 2017 to 458 million in 2100), supporting rapid economic growth and its rise in GDP rankings from 23rd place in 2017 to 9th place in 2100” it adds. 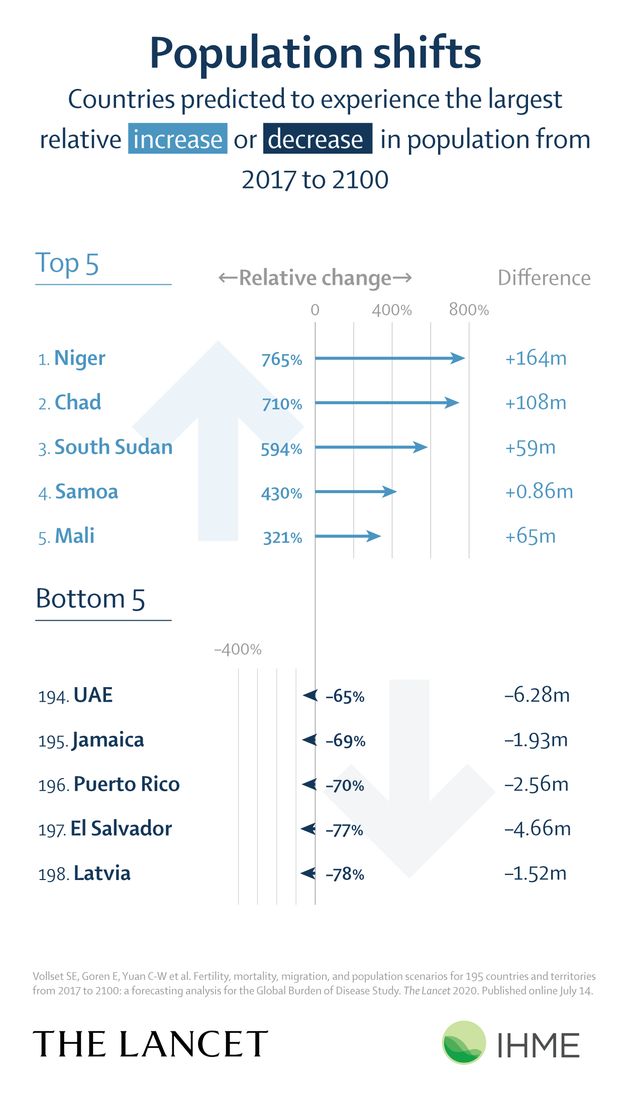 India, “expected to be one of the few major power in Asia”

According to the research, “although numbers of working-age adults in  India are projected to fall from 762 million in 2017 to around 578 million in 2100, it is expected to be one of the few major power in Asia to protect its working-age population over the century”.

“It is expected to surpass China’s workforce population in the mid-2020s (where numbers of workers are estimated to decline from 950 million in 2017 to 357 million in 2100), rising up the GDP rankings from 7th to 3rd”, it underlines.

“This study provides governments of all countries an opportunity to start rethinking their policies on migration, workforces and economic development to address the challenges presented by demographic change”, IHME Director Dr. Christopher Murray, who led the research, pointed out.

Murray underlined that “for high-income countries with below-replacement fertility rates, the best solutions for sustaining current population levels, economic growth, and geopolitical security, are open immigration policies and social policies supportive of families having their desired number of children”. 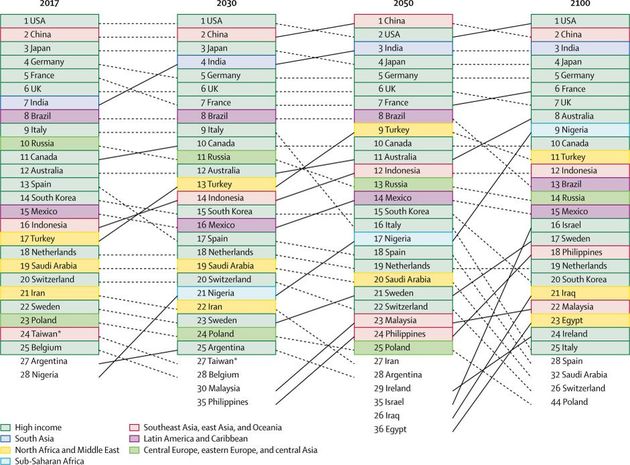 “In the face of declining population, some countries might consider policies that restrict access to reproductive health services, with potentially devastating consequences. It is imperative that women’s freedom and rights are at the top of every government’s development agenda”, he warned.

According to IHME Professor Stein Emil Vollset, first author of the paper, “responding to population decline is likely to become an overriding policy concern in many nations, but must not compromise efforts to enhance women’s reproductive health or progress on women’s rights”.

Murray explained that “the societal, economic, and geopolitical power implications of our predictions are substantial. In particular, our findings suggest that the decline in the numbers of working-age adults alone will reduce GDP growth rates that could result in major shifts in global economic power by the century’s end”.

"This important research charts a future we need to be planning for urgently. The 21st century will see a revolution in the story of our human civilisation”, Horton concluded.

You can see the full study here.

Published in: Evangelical Focus - life & tech - The population of Spain and Italy might halve by 2100, study says