A Pew Research Center survey shows that “people in emerging economies tend to be more religious and to say that belief in God is necessary to be moral”. 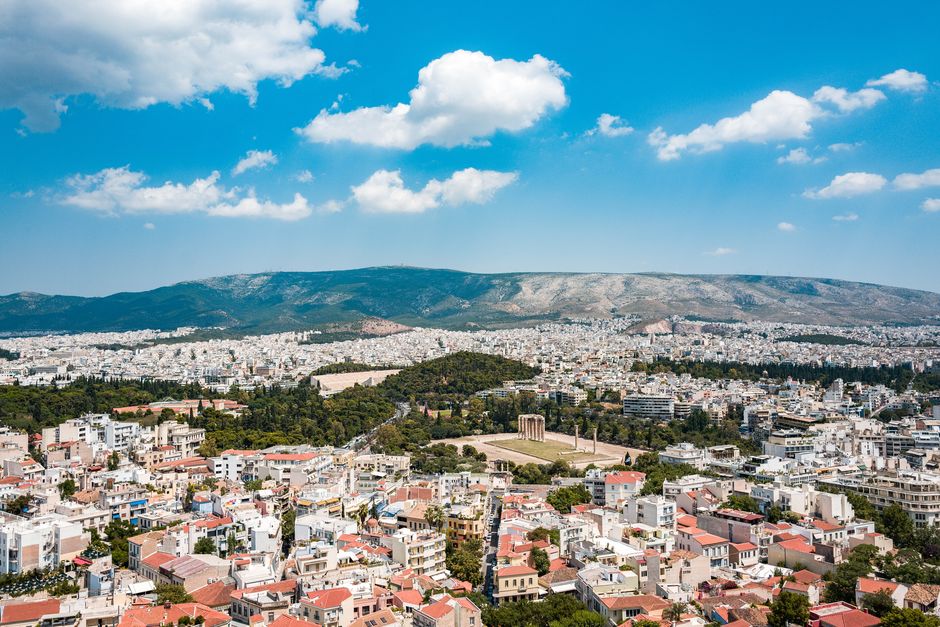 Athens, Greece, the European country that has the largest share of residents who tie belief in God to morality, survey says. Ryan Spencer, Unsplash CC0.

Pew Research Center has recently released a survey made to 38,426 people in 34 countries, to know what is the connection between belief in God and morality  and how important are God and prayer in people’s lives.

“Across the 34 countries, which span six continents, a median of 45% say it is necessary to believe in God to be moral and have good values”, the study points out. 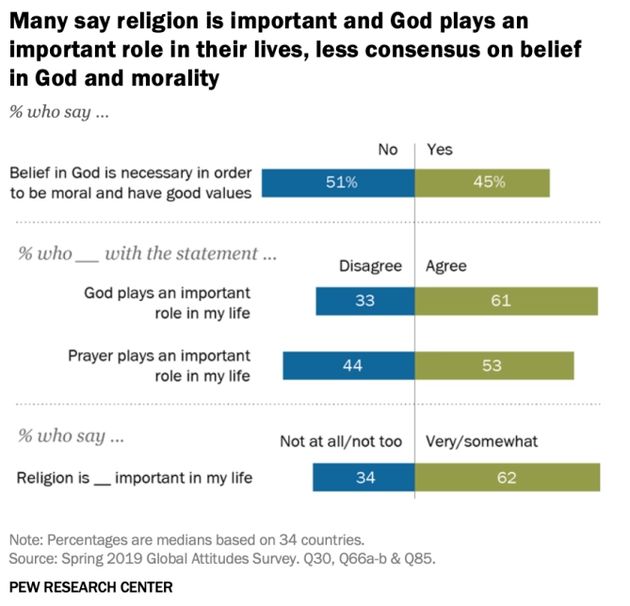 More Eastern Europeans believe God is necessary to be moral

In the eight Western European countries surveyed, “a median of just 22% say belief in God is necessary to be moral, while in the six Eastern European nations studied, a median of 33% share the same view”, the research says.

“Of all 13 countries surveyed in the European Union, Greece has the largest share of residents who tie belief in God to morality (53%), followed closely by Bulgaria (50%) and Slovakia (45%)”, it adds.

Furthermore “in many countries on the European continent, relatively few people say it is necessary to believe in God to be moral, including just 9% in Sweden, 14% in the Czech Republic and 15% in France”.

Meanwhile, “both Russia and Ukraine have seen an evolution of opinion on this question, but in opposite directions. Russia has seen an 11% point increase since 2002 in the share who say belief in God is necessary to have good values, while Ukraine has seen an 11-point drop”.

Views on belief in God and morality by GDP per capita

The study also analyses the relationship between God and morality and the GDP of the countries surveyed, showing that “overall, respondents in nations with lower gross domestic product are more likely to say that belief in God is necessary to be moral and have good values”.

On an individual basis, “those who earn at or above the median income threshold in most nations are significantly less likely to say that belief in God is necessary for morality”.

The study explains that “most countries surveyed display generational gaps on the question of whether belief in God is necessary in order to be moral and have good values”.

Researchers find that “in a majority of the 34 countries surveyed, those ages 50 and older are significantly more likely than those ages 18 to 29 to think that belief in God is necessary for morality”.

“However, in the Czech Republic and Sweden, no more than two-in-ten people in every age group take that position. In no country surveyed were 18- to 29-year-olds more likely than older age cohorts to say that it is necessary to believe in God to be moral”, the survey underlines.

Additionally, “in 15 countries surveyed, those on the ideological right are significantly more likely to say it is necessary to believe in God in order to be moral and have good values”.

The survey shows that “the left-right gap exceeds 30% in Poland and Greece. Though only about one-in-ten right-leaning Swedes say that it is morally necessary to believe in God, the right-left gap persists even in Sweden: just 2% of those on the left say the same”.

The importance of God in the life of Europeans declines

“When asked about the importance of religion in their lives, majorities in 23 out of 34 countries say religion is very or somewhat important to them”, it says.

The European countries in the study “tend to have much smaller shares who say religion is either very or somewhat important in their lives, including 22% of adults in Sweden, 23% in the Czech Republic, 33% in France and 39% in both the Netherlands and Hungary”. 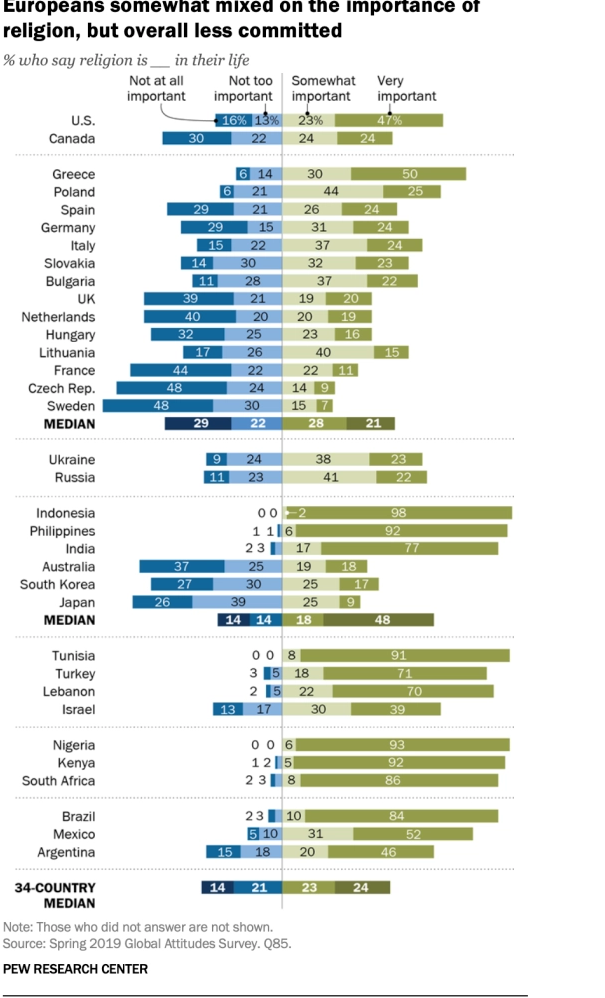 “In the Czech Republic, France, the Netherlands, Sweden and the United Kingdom, adults are more likely to say religion is not at all important in their lives than to choose any other answer option”, the survey points out.

On the other hand, “more than six-in-ten respondents in Greece, Poland and Italy say religion is very or somewhat important in their lives”.

The share of Europeans who say that God plays an important role in life has declined since 1991. Spain, Italy and Poland had the most dramatic decreases, with declines of 26%, 21% and 14%, respectively. This trend is mirrored in many other European countries, including Lithuania”.