On Sunday, nearly 200 people attended a prayer meeting for Goto and his family, said Kazuto Takahashi, pastor at the United Church of Christ in Japan in Denenchofu, Tokyo, where Goto was a member. 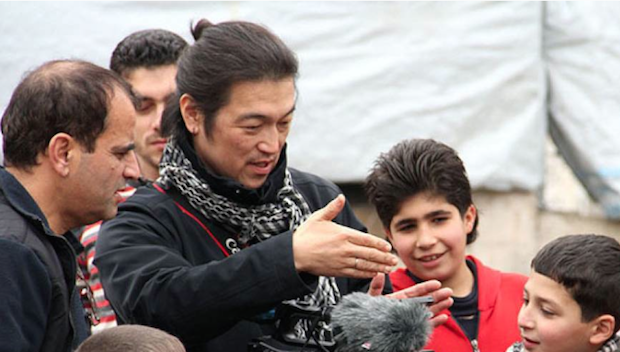 Goto had reported as a journalist from places like Irak, Somalia and Syria. / Japan Times

"I remain extremely proud of my husband, who reported the plight of people in conflict areas like Iraq, Somalia and Syria" Goto´s wife said. "It was his passion to highlight the effects on ordinary people, especially through the eyes of children, and to inform the rest of us of the tragedies of war," she added.

She, and the rest of the  family and friends, were speechless and in anguish, after a  video was  posted online early Sunday morning that shows what appears to be the beheaded corpse of Islamic State group hostage Kenji Goto.

Goto’s 78-year-old mother, Junko Ishido, was barely able to speak as she read from a prepared statement to express her grief.

“Kenji has passed away. I am at a loss for words, facing such a regretful death,” she said late Sunday morning at her home in Koganei, western Tokyo. “The only thing I can do now is to shed tears of deep sorrow.”

She added, however, that she believes such feelings of pain should not lead to a chain of hatred.

“I strongly hope we can hand down Kenji’s wish of creating a society without war and saving children’s lives from war and poverty,” she said, referring to the work of the 47-year-old freelance journalist. 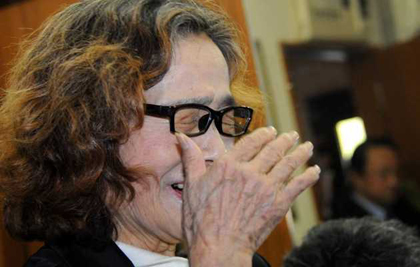 Goto’s older brother, Junichi Goto, 55, told NHK that he appreciated all the efforts made to rescue his sibling, including those of the Japanese government, the people of Japan and others all over the world.

“As a brother, I had hoped Kenji would come back safe and thank everyone himself, so this is extremely regrettable,” he said.

“I am proud of the work he has done in the past, but I think the action he took this time was indiscreet,” he added.

Junichi Goto said although he was preparing for the worst, he had hoped the negotiations would somehow work out and his brother would come back alive.

“The Islamic State group has been showing off its power and expanding its influence by taking away the lives of my brother and many other people,” he said. “Such actions are anti-social and unacceptable.”

Shoichi Yukawa, the 74-year-old father of Haruna Yukawa, 42, who was being held with Goto, told reporters Sunday morning he feels sorry for Goto’s death.

“I have heard that Mr. Goto went to save my son. I feel deeply sorry for his family,” he said. “Mr. Goto is a very respectable person. I feel so regrettable that I can think of nothing else to say.”

Yukawa is believed have been executed on or before Jan. 24.

Freelance photojournalist Naomi Toyoda, who worked with Goto in Jordan in 1996, was overcome with grief because he had been trying to save his friend since the hostage crisis began on Jan. 20.”It’s devastating,” Toyoda said Sunday. “I’m so sorry that I couldn’t rescue him.”

Toyoda, who had earlier released two statements through the Japan Visual Journalist Association pleading for Goto’s release in English, Arabic and Japanese, said he is angry at both the Islamic State groupand the Japanese government.

“Tell me, what has the government been doing after all this time? Can it swear that it did its absolute utmost to negotiate with (the captors)? Did it really mean it when it said it will save him? I’m angry, disappointed and exasperated.”

Journalist Junpei Yasuda, who has covered numerous civil wars and was good friends with Goto, expressed disappointment in the tragic outcome. He fears Goto’s death will put Japanese at greater risk of being targeted by terrorist groups.

“Until now, Japanese have been relatively free of dangers,” Yasuda said. “The outlook will change completely after this.”

Kozo Nagata, a professor at Musashi University in Tokyo and a former NHK producer, worked with Goto for the first time in 2000, and the pair collaborated on TV documentaries. Nagata said that although Goto’s death is tragic, people should not get carried away in their grief, and must avoid hasty reactions.

“We have to respect the words Goto left in a video he filmed before entering Syria, which said we shouldn’t blame the Syrian people,” Nagata said. “We have to think why the Islamic State group has expanded so much and become so heinous. Japan has been the target of terrorism this time, but we shouldn’t overreact and call carelessly for countermeasures against terrorism.”Hiroshi Tamura, pastor of the Chofu, western Tokyo, congregation of the United Church of Christ in Japan, said his heart aches when he thinks about what Goto’s family must be feeling. Until March 2013, Tamura had been a pastor at the Denenchofu congregation of the same church, which Goto attended.

“At the same time, I strongly hope that this will not trigger a negative chain (of events). It would be the unhappiest thing, if fear comes to dominate people’s minds because of this and invites further negative reactions,” Tamura said. “During World War II, 70 years ago, tens of thousands of people were captured as hostages and became victims of the war. We have to make efforts not to make ugly war again.”

On Sunday morning, nearly 200 people attended a prayer meeting for Goto and his family, said Kazuto Takahashi, pastor at the United Church of Christ in Japan in Denenchofu, a residential area of southwest Tokyo, where Goto was sometimes a member of the congregation.

“We all prayed hard for his family, who are in the midst of deep sadness. We also prayed that God’s blessing be given to him,” Takahashi said. “Furthermore, we prayed that we will have a society with no conflicts, a society where peace prevails.”

While Goto could not attend the church regularly as he spent much of his time abroad reporting, he was known among the congregants as a gentle man with deep compassion for children, Takahashi said. “Everyone also said he had a tireless passion for his work and a strong sense of justice,” he added.