“We have to talk about what pedophilia is”

“Ignorance and the lack of resources cause many people to remain isolated”, psychologist Silvia Villares says. She has organised a forum with experts.

Looking at what causes and adult to sexually abuse a child is a very complicated issue.

The psychologist expert in behavior therapy and President of the Social Intervention Association, Silvia Villares, is organising the I Forum of Prevention of Child Sexual Abuse, in Castellón de la Plana (Spain), April 28.

The one-day conference is structured around two fundamental aspects. On the one hand, it will train parents, educators and minors. On the other hand, it will present findings to develop a therapy with people who have committed sexual abuses.

“One in three pedophiles believe that, to this day, a professional could not help them. In fact, there are not many specialised professionals who want to work with these types of sexual deviations”, says Villares.

Other speakers will be Rubén Sanchidrian, chief of the Guardia Civil Judicial Police, Carlos García, head of the minor section of the Equality and Inclusive Policies Office of the regional Government of Valencia, and Marcos Zapata, former director of a centre for juveniles  and President of the Spanish Evangelical Alliance.

Question. Why this Forum, Silvia?

Answer. Throughout these years of work, I have had the opportunity to meet people who seek for my help in many areas. People who have been both victims of sexual abuse as well as people who have sexually abused others.

I collaborated with another professional in the case of a minor who suffered a sexual abuse, and an aggressor who courageously wanted to admit what he had done and seek help. The idea came from this collaboration. We understood that in many aspects there was a lack of information, education and resources.

Q. You look at the models of Germany and Canada. To what extent can education help prevent the reality of child sexual abuse?

A. We need to be well trained, be aware, realise how important it is to know how to approach, prevent and deal with child sexual abuse. 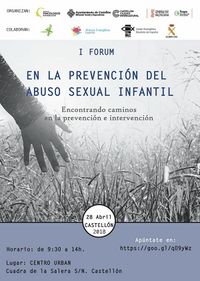 I found that in countries like Germany, since 2005, a team of psychologists, funded by the Volkswagen Foundation and state aid, had developed a program for people whose sexual orientation is the attraction for children.

They have found that when you offer the aggressors programs where their anonymity is preserved and the help is free, they come voluntarily.

There really is a lot of ignorance and many myths because, in a certain way, child sexual abuse is one of the crimes that generate the most repulsion in society right now.

Everything we can learn from other countries and the results they have obtained is a challenge.

That is why there are two key aspects in the Forum we are organising. One focuses on resources to prevent, educate and generate ideas for educators, children and parents, in the prevention and detection. And the other aspect has to do with understanding what pedophilia is and why these programs are important in order to teach how to control behaviors.

Q. But the usual reaction is to demonise the aggressor.

A. Germany has worked in media campaigns that have taught that, although there is an attraction for the child, not all pedophiles will necessarily abuse. There are many pedophiles who will never get to do it. In fact, abusing a child involves many other reasons and not just being a pedophile. We have to dismantle myths and talk about what pedophilia is.

Precisely, to break this stigma, the person who feels this type of sexual attraction has a much more negative concept of himself, and this causes them a greater psychological deterioration. Therefore, the chance of an abuse increases. Not everyone who abuses a child is a pedophile.

It is key to know that the pedophile feels a discomfort due to his sexual attraction. There are several theories about the origin of pedophilia. The most widespread today in the scientific community says that the pedophile is born, as if they have a different brain 'wiring'.

There are people, like James Canton, who have studied the brains of many pedophiles and have seen that there is an alteration, which implies that when they see a child they feel a greater sexual attraction. This opens an interesting line of research and intervention, because, if there are people who are already born with this orientation, we must teach them, educate them and give them tools of self-control so that they understand what is happening to them.

One of the things taught in the German programs is that they are not responsible for their sexual orientation, but they are responsible of choosing not to abuse. Some slogans say: “Do not let your fantasies become crimes”.

Today, the therapies aim to develop psychological tools to work on empathy and understand how this affects children to help them change their misconceptions, offer self-control strategies and, ultimately, help them to have a life as healthy as possible because that will prevent aggression. There is also controversy with the pharmacological therapies that are being applied to these people.

Research in Germany shows that, when a channel of help is opened, these people come. Therapies performed with them can help prevent sexual abuse. Only for that reason, it is worthwhile to look towards the aggressor.

Q. Do these therapies work?

A. There is data on how many of the people who have attended these programs remain stable. There are significant numbers of people who, once they go to the programs, they make follow-ups to control themselves.

In my professional experience over the years, I have worked with some people who have sexually abused others. When they come, it's because they do not want to do this again. 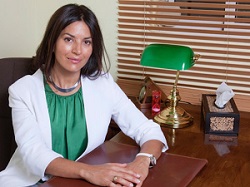 But, at least a third of the pedophiles believe that, to this day, a professional could not help them. In fact, there are not many specialised professionals who want to work with these types of sexual deviations.

The great ignorance and the lack of resources are the reasons why many people remain isolated.

When you investigate this issue, you find that, for example, in the United States, there are pages called 'virtuous pedophiles': a group of people who have a shared attraction for children but do not want to abuse them. They support each other, creating a place where they can talk about something that makes them feel different.

We must distinguish between pederasty (child sexual abuse) and pedophilia (sexual attracction to children), because there are many reasons why many people who are not pedophiles end up abusing minors.

Q. Rachael Denhollander was the first victim of sexual abuse to publicly denounce the former doctor of the American gymnastics team, Larry Nassar. She said that because of the abuse she suffered, she lost her church as well. What role does the church really play in all this?

A. I have had cases within our evangelical context. Our churches are representations of society in all aspects.

I think we should focus, not on feeling ashamed or alarmed, but on how to promote work, awareness, educational programs and, above all, protocols for action in the communities.

It is very sad when a person comes from a church, whether leader or not, and confesses not knowing what to do in such a situation.

There is a social responsibility and, if this is covered up, the repercussions will not only be for one church but for all the churches. Therefore, I think that federations and associations of churches have to become aware of the importance of talking about this issue and having these protocols, to be ready when these cases arise.

I collaborate with a criminal lawyer who helps very much, and she recently helped us during a case, to take the right steps to see what needs to be done, because these situations can not go unpunished.

We cannot pretend that nothing has happened because of our prestige or because we do not have action protocols or information. But it is important to take the appropriate steps from there.

In fact, the law of criminal prosecution forces psychologists, not religious ministers or lawyers, to report when there has been a crime or there is some obvious danger that there is.

This is a stumbling block for us because it hinders the trust of the people we serve. In Germany, for example, this is different.

To this day, I continue to work with this person who very bravely decided to accept help. This person is also dealing with the spiritual aspect, helped by someone else.

I think all this helps us to know how to channel the situation, and gives an opportunity so that there are no other children abused and this person does not end up ruining his life.

It is necessary to act with extreme prudence and delicacy, taking steps forward and not generating a social alarmism in the church.

Training for church leaders is needed to be able to address this reality of which, as part of society, we are also responsible. We can contribute very much in prevention, starting in our own communities.

Published in: Evangelical Focus - life & tech - “We have to talk about what pedophilia is”