Many of us don't know anything other than living in freedom. But often we're not aware –or we don't want to know– that the choices we make in our freedom can curb the freedom of others. 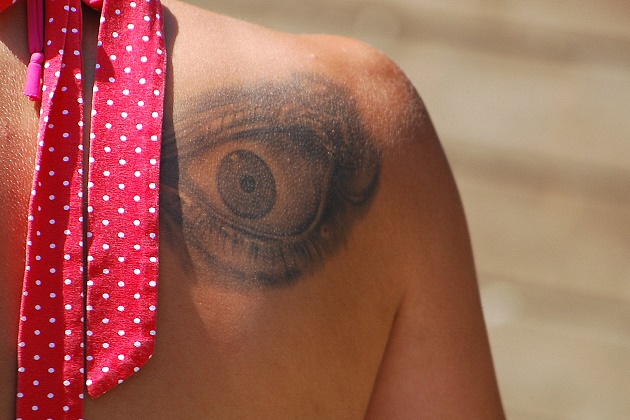 It's summer in Prague. Temperatures above 25 degrees. People dress as lightly as possible. And then appears what has been covered all winter: Tattoos in all the colours of the rainbow. Big artworks are covering shoulder blades and upper arms.

The one I found most intriguing I saw in the metro station. A young woman in her mid-twenties. I was going up the escalator and she was going down. Her upper leg was one big tattoo. And every time she put her right foot one step down, the word 'liberty' was revealed from under her mini skirt. I was wondering why she had chosen just that word. “Liberty”, what does that actually mean? Freedom is very important here in Prague. Regularly I hear people saying things like: ”No, that wasn't possible during communism.” And then the wall fell. Freedom! The people were liberated from communism.

But when liberated from something, you're also freed to something. But how to fill in that freedom? During communism it was better not to be different than others: individualism wasn't valued. After the revolution everything changed. There was freedom of the press, freedom of religion, and freedom of expression. And individualism grew as well. The freedom to be a unique individual is important. Creativity is encouraged, because it makes you different from  the masses. But that's one side of the coin. Freedom brought with it negative consequences as well.

Human trafficking is currently a major problem in the Czech Republic. This is a direct result of opening up the borders in 1989. And it became easier when the Czech Republic became part of Schengen. A very uncomfortable reality. Even more so as many Czechs know nothing about it , even where it's happening right under their noses. How free are you when you use your freedom to take it away from others? When with your freedom and the choice you make slavery is facilitated?

Many of us don't know anything other than living in freedom. But often we're not aware –or we don't want to know– that the choices we make in our freedom can curb the freedom of others. Think of the seamstress in Bangladesh who makes our clothes under miserable circumstances. For a pittance. We are often not aware that we not only bind others by making the choice we make, but we ourselves are also bound, for example, to our bank account or our laziness. Freedom, or liberty, is a relative concept.

Jesus of Nazareth, who stood up for the poor and oppressed as no one else, told people who believed in him: “You will know the truth and the truth will set you free (liberate you).” Maybe that should be written on the left leg of the woman in the metro station: “Truth!” With an exclamation mark. Because “Liberty” and “Truth” belong together.