A joke in your face

The Four Seasons are portraits carefully crafted by each season’s elements, and questions our notions of the human face and the sentiments it evokes. 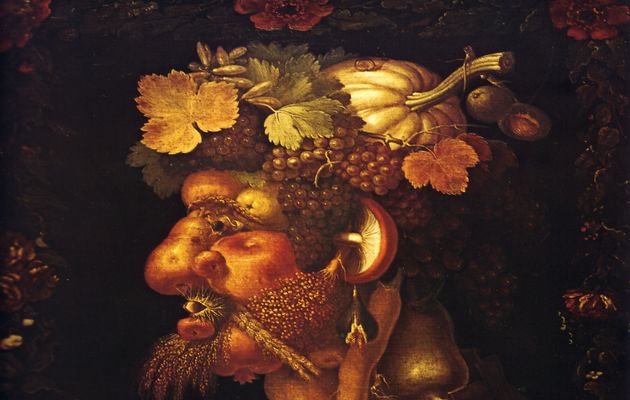 What are faces composed of? Skin and muscles? Sentiments? The long evolving cycle of events mirrored on our eyes and smile? I thought about these questions when Giuseppe Arcimboldo’s The Four Seasons caught my eye when I last visited the Louvre.

The Four Seasons are portraits carefully crafted by each season’s elements, and questions our notions of the human face and the sentiments it evokes.

It is a dark and fascinating mirror, to look’s at Arcimboldo’s portraits. There is first a bewildering effect, as our eyes move between the individual parts and the whole of each portrait, and remain fascinated with the possibility that elements like a tree trunk and lilies, never in our mind associated with human material, can form not only a face but an expressive one. 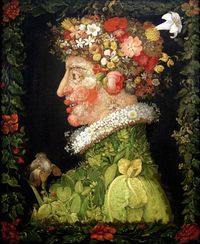 Spring, for example, exudes not only a flowery exuberance but also a certain naïveté, the impression of inexperienced youthfulness born of an insecure smile, blushed cheeks and the eye of someone who still stares gaily at the world and thinks in generalities. 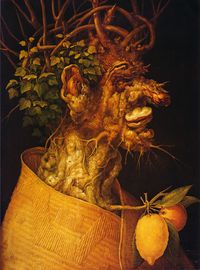 Winter, on the other hand, projects fierceness and determination, like a centuries-old trunk accustomed to hardship and decay.

Our bewilderment becomes then curiosity: what is Arcimboldo up to here? It is not postmodern relativism, since Arcimboldo lived in the sixteenth century and composed The Four Seasons in 1573. Nor is it the random fancy of a disproportionate imagination, for the portraits reflect a century’s rising interest in botany and horticulture and Arcimboldo’s own attentive, lucid eye (he includes at least eighty different species of plants and flowers in the Spring portrait alone).

If our hearts proceed then to repulsion, we may be tempted to conclude that it is all a bad joke – no, my lips do not resemble a tree fungus like in Winter –  but I think the truth is both close and far from this.

The Four Seasons is a good joke, in other words. It is rather funny: a piece that reflects both the mannerist interest in nature, humanity and their correlation, and Renaissance’s fascination with enigmas, puzzles and the bizarre. It seems a bad joke because we are the object of the amusement, our very flamboyant faces. 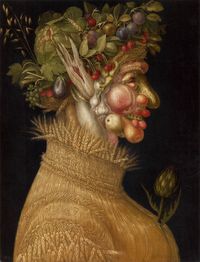 The Four Seasons reconstructs the element of the human body we call the window into the soul, and thus undermines our understanding of humanity and of ourselves. There is a mixture of fascination and repulsion because, beneath the veneer of profile portraits, we wonder if these portraits are instead mirrors, magical mirrors which distort our faces but echo our soul.

We fear they are scary reflections which take us away from our faces and closer to the current season of our souls: an imaginative translation of the heart’s mood, be it the contentment of a warm summer breeze, the fertile excitement of spring prospects, or the pain of decadence mirrored in autumn’s darkening leafs.

But the joke is good only if we take it seriously and then laugh at it. If we take the warmth we feel, like that of vegetables just brought from under the sun, and merry and dance in it. Or if we take the solemnity with which we nurse our sorrows and fear decay and throw a juicy pumpkin on our head.

Jokes heal when they bring unexpected laughter, and laughter which giggles at ourselves humanizes us. We were the object of a prank, of a prank as good as a cucumber, and we may as well let daisies grow on our heads.

Published in: Evangelical Focus - Culture Making - A joke in your face