10 differences between Luther and Zwingli

How to differentiate between the two Protestant reformers? 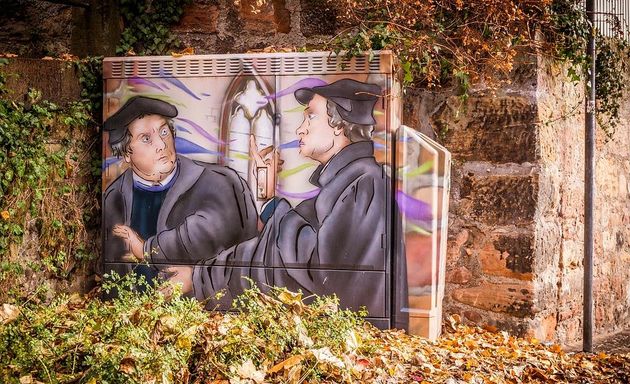 Martin Luther and Huldrych Zwingli sure had a lot in common.

Both reformers held to the key Protestant principle of Sola Scriptura and hence opposed many of Rome’s anti-biblical teachings (the idea that there are seven sacraments, the conviction that the clergy must be celibate and the doctrine of Transubstantiation, etc.)

But, how are we to differentiate between the two? Is it possible to distinguish between the theologies of the German and the Swiss?

Today, I hope to give ten brief answers.

With regards to worship, Luther embraced the normative principle whereas Zwingli believed in the regulative principle. What does that mean?

The normative principle excluded from the congregation those things which were expressly forbidden by Holy Scripture; but the regulative principle only accepted that which was explicitly commanded by the Word.

For example: what about organs? A Lutheran cathedral, based upon the normative principle, had no problem with them; but Reformed temples would have nothing to do with them.

Practically speaking, therefore, by their very DNA Lutheran buildings have a much more Roman and traditional feel about them. In this sense, Zwingli was more iconoclastic and radical than his German counterpart. 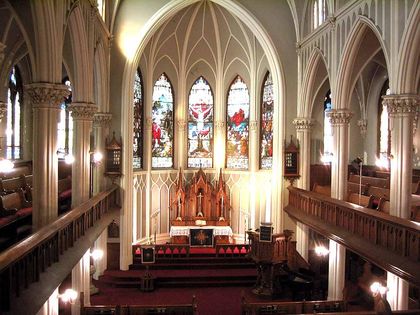 Luther was primarily concerned about doctrinal renovation within the walls of the Roman Church.

He wished to promote a theological renewal, majoring upon the rediscovery of the apostolic Gospel which proclaimed the sufficiency of Christ to justify the sinner by faith alone.

Zwingli, faithful to his humanist leanings, was predominantly interested in ethics. He dreamt of a church which was faithful to the principles of Christ’s call unto discipleship and morality.

For him, the Reformation was much more about changed lives than about theological precision.

Hence, Luther’s theology stressed Christ as the Saviour and Redeemer whereas Zwingli spoke of Him as the supreme Example and moral Teacher.

How are we to interpret the words, “This is my body”?

Luther and Zwingli were not able to reach an agreement over the meaning of the sacramental words of Christ, “Hoc est corpus meum”. They met at the well-known Colloquy of Marburg in 1529 to discuss the issue.

The debate had been summoned by one of Protestantism’s leading political players, Felipe I of Hesse.

Luther was convinced that the words of Christ had to be interpreted literally, meaning that Christ was somehow physically present in the bread and the wine.

In other words, the German believed in the real presence of Christ in the Supper.

But as far as Zwingli concerned, Christ’s words were to be understood symbolically as the verb form “is” means that the bread and the wine “symbolize” or “represent”

His body and blood. He did away with any notion of the real presence. The Table of the Lord was a purely commemorative event.

Whilst it is undeniable that both Luther and Zwingli rejected Transubstantiation, they did so for different reasons.

The German took a stand against the Roman understanding of the Eucharist because it was ultimately based upon the philosophy of Aristotle.

According to the Vatican, the ‘accidents’ of the bread and wine remain. But their ‘substance’ is wholly transformed so that the worshipper literally feasts upon the body and blood of Christ.

Luther, notwithstanding, did in fact believe in the real presence of Christ; however, that was not down to any Aristotelian conviction but to the omnipresence of the bodily nature of the Lord Jesus (a Lutheran doctrine known as the ubiquity of Christ).

This means that the bread and wine continue being bread and wine (unlike in Roman theology), but that the body of the Lord is physically present alongside and within the elements (somewhat like water in a sponge). Some have helpfully labelled this perspective as Consubstantiation.

Zwingli, not surprisingly, denied any notion of the real presence whatsoever. How can the Son of God by physically present in the Supper, he asked, if Christ is at the right hand of God?

Since the Son of God has a glorified body, He cannot be in two places at the same time.

Luther, as an ecclesiological conservative, was happy to stick to the traditional usage of the term ‘Mass’ within the context of Christian worship.

He maintained the word whilst dispelling the notion of the Supper as a sacrifice.

Zwingli, once more, was a lot more radical than his German counterpart and replaced the ‘Mass’ with expressions like the Lord’s Supper, the Lord’s Table and the Breaking of Bread. 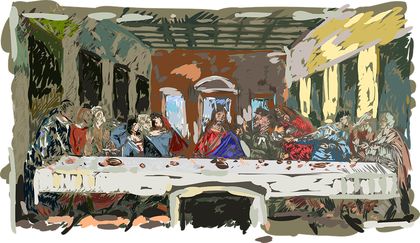 6.- How Often Should the Supper Be Celebrated?

Another discrepancy between Luther and Zwingli concerned the amount of times the Supper should be celebrated within the congregation.

Luther wanted to continue having the Supper every Sunday. He did indeed underscore the importance of renewed vigour and biblical substance in the pulpit; but always within the context of the Eucharist.

In the German’s mind, the preached Word and the sacraments were inseparable.

But Zwingli put forward the idea that the Word reigned supreme over any ordinance and therefore, he put preaching in pole position.

This conviction led the Swiss reformer to celebrate the Supper as little as three or four times a year.

In a phrase: Luther esteemed the Word and the Supper as the two indispensable ingredients of the Sunday service; whereas Zwingli exalted preaching to the detriment of the Table.

7.- The Relationship Between the Word and the Sacraments

We can understand the differing theologies of Luther and Zwingli with respect to the Supper if we keep in mind their interpretation of the relationship between the Word and the ordinances (baptism and the Lord’s Supper).

According to Luther’s traditional worldview, it is impossible to separate the Word and the sacrament.

They always go together. In his thinking, the ordinances not only mediate the power and the presence of Christ but they are also able to create faith.

In fact, when Luther found himself under satanic assault, he often replied to the devil by saying, “Baptizatus sum” (“I am baptized”).

That is to say Luther pinpointed the source of his personal salvation to the waters of baptism.

Zwingli, however, thought that the Word and the Spirit were free to work without the need of the ordinances. He believed the sovereign Lord could move as He so desired.

And he gave no place to the idea that the ordinances could create faith. The only creator of faith is the holy Word of God applied by the Spirit.

Luther and Zwingli both defended infant baptism; but with different qualifications.

In Luther’s Small Catechism (1529) he writes that baptism, “works forgiveness of sins, delivers from death and the devil, and gives eternal salvation to all who believe this, as the words and promises of God declare”.

This definition explains why Luther shouted out, “Baptizatus sum” when under attack.

Zwingli’s doctrine of baptism was a lot less Roman. He saw the rite as an act by means of which the baptized child was received into the visible community of the faith.

By no means did he believe that baptism could forgive sins or grant eternal life. 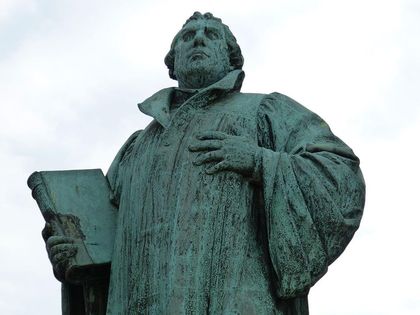 9.- The Monk and the Humanist

Although it is true that both men were avid Bible students, Luther was first and foremost a great sinner seeking “to find a merciful God”. That was why he entered the Augustinian monastery in the first place.

The German’s great driving force in life was the eternal salvation of his soul and he lived in a constant state of anfechtung (despair).

This existential dimension is pretty much absent in Zwingli’s theology. He was a lot more interested in relating Christianity to the intellectual currents of his time, in improving the ethical standards of his compatriots and in other socio-political affairs.

Luther was the man from the monastery; Zwingli, the reformer at the town hall.

The final divergence between Luther and Zwingli relates to their distinct emphasis regarding the (moral) Law of God.

Since Luther’s theology was chiefly motivated by soteriological concerns, he was always ready to proclaim the Christian’s freedom from the Law.

The Lutheran Gospel-Law hermeneutic divides the Bible into two parts: the promises of God (Gospel) and the commandments of God (Law).

In reacting so fiercely against Rome’s doctrine of salvation by works, Luther was keen to underline the liberty that the Christian enjoys in being free from the condemnation of the Law.

Even so, Zwingli was more willing to highlight the need of the Law to stimulate the moral lives of his Swiss brethren.

It wasn’t that Zwingli did not believe in the Christian’s freedom from the Law –because he most certainly did- what he emphasized, however, was the role of the Law in sanctification.

Where Luther majored upon freedom from the Law’s condemnation; Zwingli made most of its sanctifying purpose.

To conclude, let’s wrap up by repeating what we’ve learned today:

- Luther embraced the normative principle and Zwingli the regulative.

- Luther’s concern was doctrine and Zwingli’s was ethics.

- Luther believed in the real presence and Zwingli in the absence of Christ.

- Luther maintained the traditional use of the term ‘Mass’ and Zwingli did away with it.

- Luther celebrated the Supper weekly and Zwingli three of four times a year.

- Luther laid the same weight upon the Word and the sacraments and Zwingli gave more importance to the Word.

- Luther believed baptism created faith and Zwingli taught it was an act of incorporation into the visible community of faith.

- Luther was a scholastic monk and Zwingli a humanist.

- Luther proclaimed the Christian’s freedom from the Law and Zwingli its sanctifying purpose.