Swallows in the altars

A pair of swallows can clock up as many as a thousand flights in search of little mud-balls until their nest is complete. 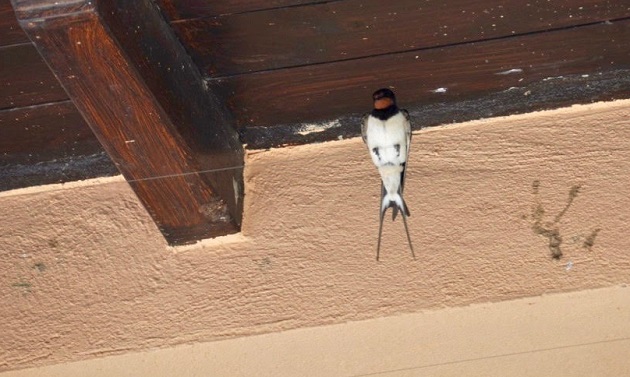 Even the sparrow has found a home,

and the swallow a nest for herself,

where she may have her young—

a place near your altar,

Lord Almighty, my King and my God.

Two Hebrew terms are used in the Old Testament to refer to swallows, swifts and house martins, all of which belong to the Hirundinidae family. the word derôr, meaning literally “swift flyer” or “the one that moves fast”, appears in Psalm 84 v 3 and Proverbs 26 v 2. In different versions this term is translated as “swift”, and refers to a migratory, non-domesticable insect-eating bird. The term agur, on the other hand, which literally means to “chirp”, probably refers to the swallow (Isaiah 38 v 14; Jer. 8 v 7)

They are birds that spend most of the time in the air, and catch their food, mainly flies and mosquitoes, in flight with their wide beaks. As soon as their young begin to fly, they can also feed them in the air. Their feet are small, but strong enough to take firm hold of the wires or branches where they perch. Swallows, unlike swifts, frequently stop and perch. Before migrating to South Africa, they cluster in large groups. They are extremely elegant birds with long external feathers in their tails, which are particularly large in the case of older males.

Their cup-like nests, which they almost always build under the eaves of human dwellings, are made of little balls of mud. A pair of swallows can clock up as many as a thousand flights in search of these little mud-balls until their nest is complete. 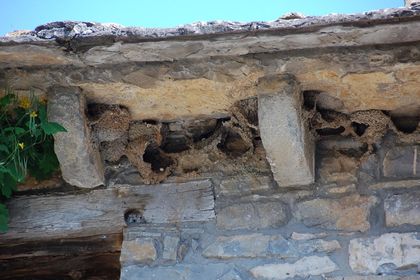 Swallows have an astonishing and unique sense of direction, and a prodigious memory, and are capable of locating nests from the previous year, even after having migrated thousands of kilometres. They are monogamous birds (they mate for life), can copulate while flying, and can cover up to one thousand kilometres in a single day.

According to popular wisdom, accumulated over thousands of years, especially that of farming and rural communities, the behaviour of swallows can serve to predict the weather. If swallows fly low, even at ground level, it is because the weather is not going to be good, while swallows flying high mean sunny weather. The reason for such behaviour has to do with where their main source of food is to be found, that is to say, where the flies and mosquitoes are flying. When a storm or bad weather threatens, insects avoid high altitudes, as the strong winds could prove fatal for them, while on pleasant, sunny days, the air currents are gentle, so flies and other insects fly at higher altitudes with the aim of finding sexual partners and mating. This insect behaviour is often referred to in English as hilltopping.

Swallows are used in the Psalms as an example of the love of God, who allows even such small and insignificant creatures as birds to build their nests next to the sanctuary (Psalm 84 v 3).

Spurgeon says the following about this text: “Even thine altars, O Lord of hosts. To the very altars these free birds drew near, none could restrain them nor would have wished to do so, and David wished to come and go as freely as they did. Mark how he repeats the blessed name of Jehovah of Hosts; he found in it a sweetness which helped him to bear his inward hunger. Probably David himself was with the host, and, therefore, he dwelt with emphasis upon the title which taught him that the Lord was in the tented field as well as within the holy curtains”. [1]

Swallows and little sparrows which freely built their nests within the perimeter of the temple, were protected by the temple itself. No one could bother them, scare them away or pursue them, or, of course, take away or destroy their nests. The protection offered by this holy place was a continuous refuge, which protected their lives. They enjoyed shelter, an abundant supply of food, and a good place to live. The prophet Jeremiah also refers to swallows when he contrasts their wisdom and foresight with the foolishness of the people of Israel, who did not know the laws or the judgements of the Lord (Jeremiah 8 v 7).

Published in: Evangelical Focus - Zoe - Swallows in the altars

1
135 incidents against evangelicals reported in India in the first half of 2020
2
At least 100 pastors died in Bolivia due to Covid-19, evangelical sources say
3
United States urges Cuba not to harass independent journalists
4
Italian evangelicals discuss the challenges of the draft law against homotransphobia
5
Jürgen Klopp: “Jesus is the most important person in history”
AREOPAGO PROTESTANTE uses “COOKIES” in order to guarantee the proper functioning of our website, improve its security, obtain better efficiency and personalisation, collect statistical data and show you relevant advertising. Click “OK” to authorise its use . If you reject the use of “cookies”, AREOPAGO PROTESTANTE cannot guarantee the functionality of the website. Learn more about our COOKIES POLICY at the bottom of the page.