Is the Vatican in bankruptcy? 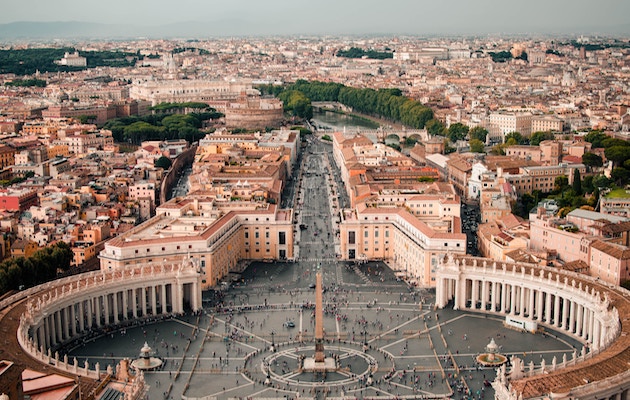 Journalist Gianluigi Nuzzi believes that Vatican bankruptcy could be a reality in 2023. / Caleb Miller, Unsplash CC

120,000 euros a day of losses and a deadline of four years if nothing is done before. This is one of the most shocking conclusions that journalist Gianluigi Nuzzi has told in his book Giudizio Universale, written from 3,000 confidential documents of the Vatican.

Nuzzi who was one of the big names of the ‘Vatileaks’ case, in which letters and classified documents from the Vatican were leaked and published during the papacy of Benedict XVI.

In the book he recounts a situation of “structural deficit” of the institution.“Without urgent measures, there is a risk of bankruptcy”, Nuzzi says.

According to the journalist, bankruptcy could be a reality in 2023 if, among other things, some personnel expenses that he himself puts at 140 million euros in 2018, are not reduced.

“It was said that they should stop hiring, but they have not done so. There are 600 people working in the communication department alone”, the author points out.

Nuzzi explains that the situation has worsened during Francisco's papacy, which right now, after the conviction of Australian Cardinal George Pell at the beginning of the year, does not have a prefect for the Ministry of Economy,

The Vatican has denied all this. The president of the Administration of the Patrimony of the Apostolic See, Nunzio Galantino, told Catholic newspaper Avvenire, that “there is no bankruptcy or defect here. There is only a need for an expense review. And that is what we are doing”.

According to Nuzzi, the management of real estate is having a negative impact on the Vatican accounts, with 800 empty apartments and houses, and 15% of the properties rented at reduced prices.

Precisely, coinciding with the publication of Nuzzi book, the purchase of a luxury property in London valued at 200 million euros by the Vatican Secretary of state, has been made public.

“After the mandate of Pius XI, the Holy See invested the money that Mussolini's Italy had paid them in 1929 for the Lateran Pacts, in real estate and personal property. Following the well-known economic principle of investment diversification, they operated, not only in Italy, but also abroad”, Galantino.

The vice president of the Italian Evangelical Alliance, pastor and expert on the Vatican, Leonardo de Chirico, agrees with Nuzzi that the Holy See is “a financial disaster”, but disagrees on the issue of property.

“Their real estate assets are fine and the ability to raise funds from the Vatican machinery is effective. The flow of money from the Italian Republic is still generous”, he says.

Those figures, in addition to the personnel costs and the patrimonial situation of the Vatican, lead the author to the conclusion that the institution lost about 32 million euros in 2017 and about 44 in 2018.

De Chirico points out that the problem “lies in the opacity of the institution. The fights within the Vatican, the many departments that can spend out of control, and the wrong investments made by the officials and / or administrators, show what kind of intitution it is”.

The data provided by Nuzzi contrast with those officially published by the Vatican in 2015, according to which the the Holy See recorded a deficit of 12.4 million euros, while the accounts of the Vatican State closed with a surplus of 59.9 million euros.

“At a certain point, we look at what we spend, see what comes in and try to rebalance expenses”, Galantino said.

He stressed that “the current budget of the administration of the Holy See, whether in red or green, is not the result of theft, cunning and mismanagement. It is the recognition that many things have changed”.

“It must be taken into account that the Vatican tax regime does no come from the imposition of taxes or tariffs, nor does it has a public debt. Its GDP, if we want to call it that way, is based solely on what it may get from the heritage it has, and from the offerings of the faithful and dioceses around the world”, the cardinal added.

He defended Francisco's management to “put order in equity and balance outflows and income”.

However, De Chirico believes that "the situation has become worse with Francisco. The number of people and pilgrims visiting Rome has decreased, the number of people attending Catholic churches in Rome is decreasing, and therefore the collections are less and less”.

“The people he appointed for key positions have revealed to be less than irreproachable. He talks about a `poor church’, but no property has been given away and no movement has been implemented to overcome the political-economic status quo of the state. Words about poverty abound, but facts are lacking”, the Italian pastor argues.

Unlike Nuzzi, Chirico does not see a clear date to talk about bankruptcy or dissolution of the Vatican. “If the Vatican dissolves, and when it dissolves, it will be the beginning of a true biblical reformation of the Catholic Church. I doubt it ever happens”.

“Until then, all conversations about carrying out reforms in Rome will be rhetorical, not real. The Vatican as a state is a theological oxymoron. The church cannot be a state”, he adds.

“The existence of the Vatican and its theological justification show that the Roman Catholic church cannot be an appropriate church, for the simple reason that the Lord Jesus did not grant it the jurisdiction of the state. The Vatican overlaps the two identities and does so against the simple teaching of the Bible”, De Chirico concluded.

Published in: Evangelical Focus - europe - Is the Vatican in bankruptcy?