In Nigeria, “the number of believers who think in an armed response to the violence has increased”

Human rights groups are pointing to the country, and Christians are one of the most affected groups. We interview James Akinyele, Secretary General of the Nigeria Evangelical Fellowship.

The spread of violence has brought new debates to evangelical churches and communities in Nigeria, such as that of armed response. / Open Doors.

In February 2020, 5 million people protested in cities of 28 of the 36 states of Nigeria against the persecution of Christians in the country.

It was the Christian Association of Nigeria (CAN), an interdenominational entity, that mobilised the demonstrations after a tragic first month of the year, in which the clashes between Muslim and Christian communities, especially in the north, left hundreds of deaths.

For some years, Open Doors has alerted in its World Watch List that Christians are one of the groups that suffer most in Nigeria. In 2019, the organisation counted 1,350 killings and in 2020, it said “91% of the 4,771 registered murders of Christians perpetrated around the world happened in Africa”, adding that “the largest part was in Nigeria”.

The NGOs monitoring the persecution in Nigeria agree that thousands of Christians die in the country every year. / Open Doors.

But the propagation of unpunished violence in Nigeria is no longer a reality that only worries Christians - a number of non-profit organisations working in the defence of human rights are now also following the situation in the African country closely.

Earlier in October and November 2020, thousands participated in a demonstration asking for the end of the violence of members of the Special Anti-Robbery Squad (SARS), which ended with over 70 deaths. According to Amnesty International, in the last year, “thousands have been internally displaced due to inter-communal violence and the attacks by bandits, in the northern regions”. The human rights group accuses the security forces of committing “grave human rights violations, including tortures and other ill-treatment, and the use of excessive force”.

The latest official data published by the government of President Muhammadu Buhari in June 2018, only registered 204 murders and 98 kidnappings. Since then, the Nigerian National Department of Statistics has not updated the information related to these type of crimes committed in the country. 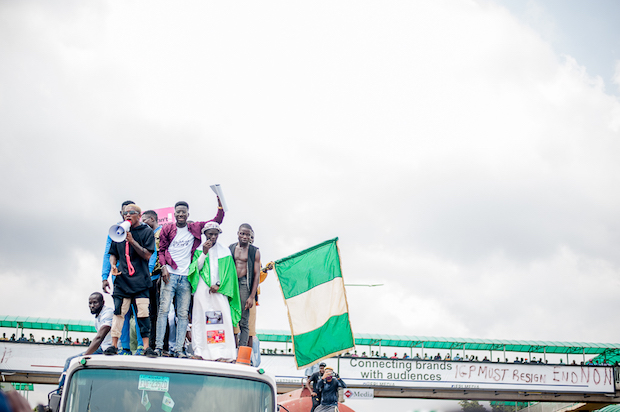 A group of youth, during the protests against the SARS of the Nigerian police. / Kaizenify, Wikimedia Commons.

The situation in the country has worsened in the last years as jihadist groups have conquered new grounds, taking control of large areas of the territory and even overcoming the national forces at times.

This has especially impacted the north of Nigeria, a region now known for being the home of the Boko Haram group, whose leader Abubakar Shekau, could have been injured or even been killed, after a clash with members of the Islamic State of the West African Province (ISWAP), according to an investigation of the Nigerian army.

In fact, a survey published in March 2021 by the Afrobarometer, based on figures of the previous year, showed that 96% of the population in the North West of Nigeria, and 89% in the North East, said they were concerned about the kidnappings.

How to respond to the violence? The dilemma of the church

In this context of spreading of violence to new regions and the general feeling of defencelessness, the churches and Christian organisations in Nigeria now debate how to shape their response, which until now has been limited to demands of more protection to the government expressed in demonstrations and protests.

According to the last report of the Nigeria-based organisation Intersociety for Civil Liberty and Rule of Law, only in the first four months of 2021, 1,470 Christians have been killed in the country, and another 2,200 kidnapped.

The NGO Release International has issued a call to pray: “This latest dimension to the violence can no longer be described as simply herder-farmer clashes”, said Executive Director, Paul Robinson. “These reports reinforce what Release partners are saying – that the government of Nigeria is simply not doing enough to protect its Christian minority in the North against attack from religious extremists”.

In the midst of all this, some Christian sectors in Nigeria have started considering the idea of articulating an armed response to the violence they suffer. “The debates about what the Christian response to the killings should be, and the concept of self-defence, have become more frequent”, the Secretary General of the Nigerian Evangelical Fellowship, James Akinyele told Spanish news website Protestante Digital.

The situation, he says, is especially difficult due to the “the failure of the government to prosecute the killers”, and the fact that “some of these communities resort to self-determination and take justice into their hands”.

In this scenario, for Nigerian evangelicals, says Akinyele, the Biblical thinking has to become and imperative when it comes to addressing a conflict that goes beyond politics and economy, including the issue of coexistence as well. 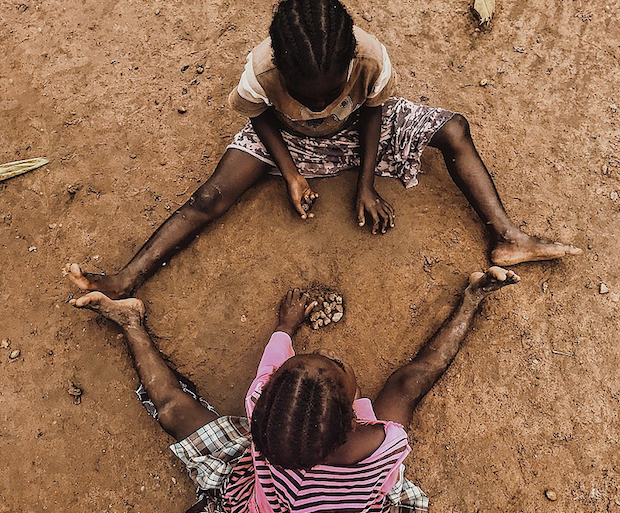 The rural communities of the north are very exposed to the attacks of radical groups. According to a survey, 96% of the population is worried about the kidnappings. / Arinze Areh, Wikimedia Commons.

Question. First of all, what is the situation of the Covid-19 pandemic looking in Nigeria at the moment?

Answer. The nationwide lockdown was eased for months now, due to the agitation of the ordinary Nigerian who could no longer cope with the negative impact of the lockdown on their means of livelihood. The majority of these people live on daily income and there was no significant assistance from government.

However, due to reported recent cases of new infections, the government reactivated a partial lockdown a few weeks ago, limiting public gatherings to 50 persons with the required Covid-19 protocols in place for organizations providing essential services.

Clubs, recreation centres, etc., are remain locked now. Largely, people still respond with a high degree of scepticism to this pandemic, so compliance with the standard Covid-19 protocols is generally poor.

Q. How have evangelical churches dealt with this epidemic? What are the current restrictions?

A. Many evangelical churches provided basic assistance through food and other primary necessities. Although many churches have resumed regular traditional meetings, virtual meetings and conferences are fast becoming a regular feature in the church.

Because of the social distance requirements, some churches now have several services, especially on Sundays. Attendees are usually now required to wear or put on face masks before being allowed into the worship places. People are sometimes required to wait for the next service once the meeting has reached its maximum capacity, even when there are empty seats.

Q. How have evangelicals in Nigeria experienced the start of vaccination?

A. The vaccines are not yet available and the limited doses that have been made available are rationed based on government priorities. Many people still remain sceptical about the safety of the vaccines due to the various myths spread through the social media.

Q. The Christian NGO Open Doors has denounced for years that Nigeria is one of the countries in the world where more Christians die because of their faith. Now, other international NGOs have joined in to point out the high level of widespread violence in the country. What do you think is the cause of this state of violence in Nigeria?

A. Historically, there has been a sustained effort to make Islam a dominant religion in Nigeria, especially in the Northern region, and continuous reactions from the non-Muslim native people in the region who see this as an effort of taking away their ancestral land.

Increasing poverty (largely due to systemic corruption and clear favouritism towards a particular ethnic group and Islam by the current government while showing considerable hostility towards others) has further worsened the crises, added to the fact that the practice of payment of huge amount of money as ransom to kidnappers has now made this violent crimes very attractive.

Q. How do you assess the government’s response to that violence?

A. The clear insincerity of the current administration in handling the crisis generated by the insistence of Fulani herdsmen who embark on daily open grazing which regularly affect other people’s farmland, is at the root of this crises.

This perceived and often glaring bias on the part of the Federal government in the management of the nation’s resources, the nepotism reflected in government appointments, and the administration of justice, coupled with the increasing level of poverty and a failing economy, has further triggered the emergence of more regional rebel groups.

The failure of the government to prosecute the killers, who often tell the press that the attack on a particular community was done in retaliation for an earlier attack against their cattle that destroyed someone’s farm is also a cause of this violence, because some of these communities resort to self-determination and take justice into their hands.

Q. Christians are one of the groups that suffer most in Nigeria. What do you do to face that? What role does faith play in this?

A. We consistently teach believers in the churches to be salt and light. Most recently, discussions about a Christian response to killings and the issue of self-defence have become common, and the number of believers who think in an armed response to the violence has increased.

We are currently working to strengthen humanitarian and disaster response among evangelicals. We are working with many faith-based NGO’s to form a Christian Humanitarian Network with the aim of providing a coordinated response to the persecuted and displaced people, especially in the North.

We are also working with some other mission agencies (local and foreign) to ensure synergy in our mission response in an holistic way.

There is a need for advocacy to ensure that people outside the country are aware that the violence in Nigeria goes beyond poverty and politics. It is also religious.

Q. How are churches organized to continue to hold services safely?

Q. How can Christians in other places pray for you?

A. Pray for increase in dialogue on this national crisis among evangelical leaders, so that a lasting and Bible-based response could be agreed upon.

Pray for courage for our Christian leaders, especially those in position of power, to speak the truth.

Pray for the conversion of unreached people, especially local Fulanis, and the foreigners who are now in the country, many of whom have been fingered in cases of violent crimes.

Pray for the safety of missionaries, pastors, and other Christian workers working in these hostile places, and for an end to the violence.

Pray for government officials to be sincere in their response. Pray for the military men on the front lines.

Published in: Evangelical Focus - world - In Nigeria, “the number of believers who think in an armed response to the violence has increased”