A website paid by International Planned Parenthood published personal data and “connections” of pro-life and pro-family groups. Strong reactions in all social spheres criticise the “culture of hate” promoted by the “thought police”.

Screenshot of the interactive map of the website ReaccionConservadora. / Social media

In Argentina, the publication of a “black list” of around 400 people, organisations, and churches that are described as a “reactionary right” and “anti-democratic” has caused a big controversy.

The website was published on 13 June and shared photos, a profile, and other personal data of alleged “anti-rights” citizens and groups. The platform had an engine to search by category (civil servant, religious leader, media, NGO, political party, think tank, speaker), place (Argentinian province) or name. It also offered an interactive map to show the personal and organisational “connections” between the listed.

24 hours later, the website was no longer accessible and on 17 June it was still offline. By then, all kind of voices of the civil society in Argentina had expressed criticism against the project.

Some denounced on social media that by “collecting personal, social data and beliefs of people” the “privacy” of those involved had been breached. Others said this modus operandi “reminds of other times in our history” [in reference to the dictatorship] while hundreds used the hashtag #lagestapoargentina (the Argentinian Gestapo) to mock the journalistic investigation.

Statements were issued by some of the main political parties and journalists, as well as by NGOs and churches.

Behind the elaboration of the “black list” published under the title “The Conservative Reaction” are six investigative journalists linked to radical feminist groups, which had previously explained on social media that the website had been paid for by the pro-abortion organisation International Planned Parenthood Federation/Western Hemisphere Region (IPPF WHR).

As they presented the website, the authors alarmed about how the pro-life movements in Argentina strongly emerged “three years ago with the debate around the legalisation of abortion”. This approach of the authors would explain why most of those included in the “black list” have been active supporters of pro-life policies.

Against the “evangelical and Catholic power”

Over 70 evangelical churches, organisations and leaders were included in the list.

The news website Evangélico Digital, a member of the Areópago Protestante media group of the Spanish Evangelical Alliance, was also included in the “black list”.

The promoters of the list had pointed to the “evangelical and Catholic powers” as some of the actors that needed to be exposed because they “are masked in secular organisations” with the aim of “obstructing the sexual and reproductive rights and fighting ‘gender ideology’”.

In a statement sent by the Baptist Confederation of Argentina and published on Evangélico Digital, Hugo Márquez, a pastor in the city of Neuquén who had himself been included in the “black list”, said many Christians were “worried about the aberrant fact that in a democracy and a state with the rule of law, ‘black lists’ are published for the only crime of thinking differently”. 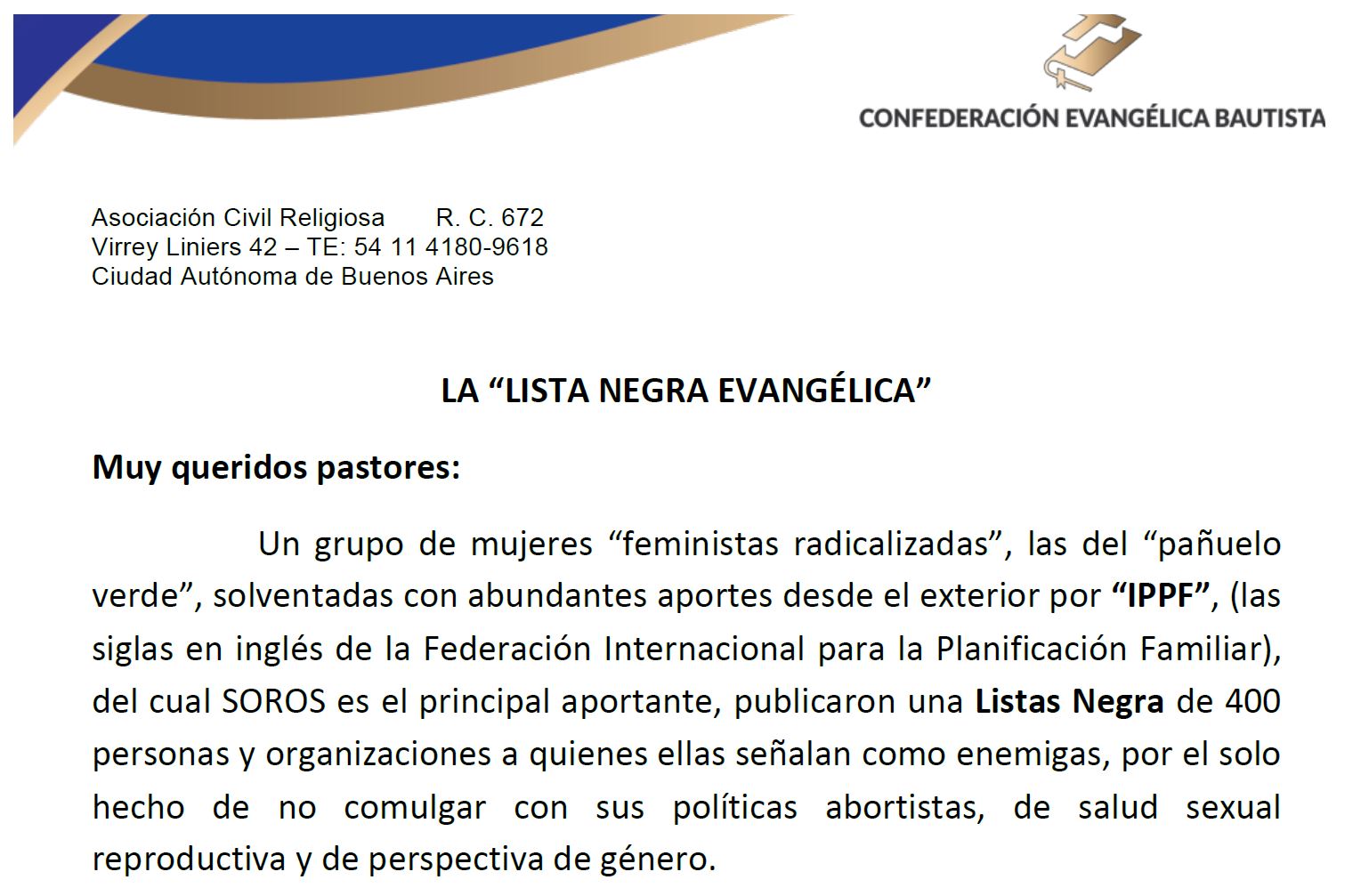 Statement sent by the Baptists Confederation of Argentina.

“These behaviours”, Márquez added, come from “authoritarian groups which do not accept the freedom of opinion but try to impose a single thought”. The pastor called the “living, active and participative church” to continue its work for the benefit of family and life in Argentina.

The Evangelical Alliance in Argentina (ACIERA) also rejected in a statement the “intimidation” which adds to the “profanation of worship places” in recent months with the “indifference of the authorities that should be looking after the healthy coexistence”.

They denounced how the formation of an unofficial “thought police” contributes to a “culture of hate” that should have no place in a democracy where there is “plurality of thought”. 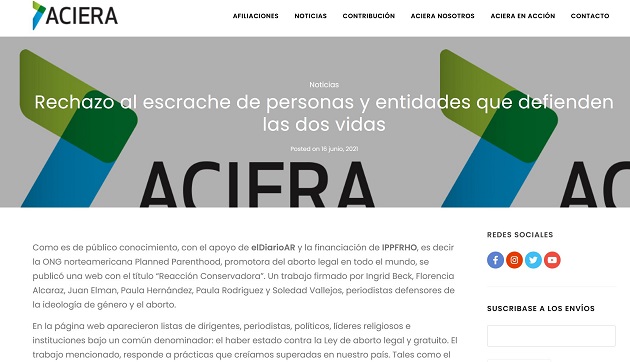