Efraim Tendero: “We need to be sensitive towards evangelicals from the Latin side”

The Secretary General of the World Evangelical Alliance believes the views of evangelical minorities in Catholic countries should be “heared” before relating to the Vatican. In an interview with Evangelical Focus, he also highlighted the role of the churches in the refugee crisis. 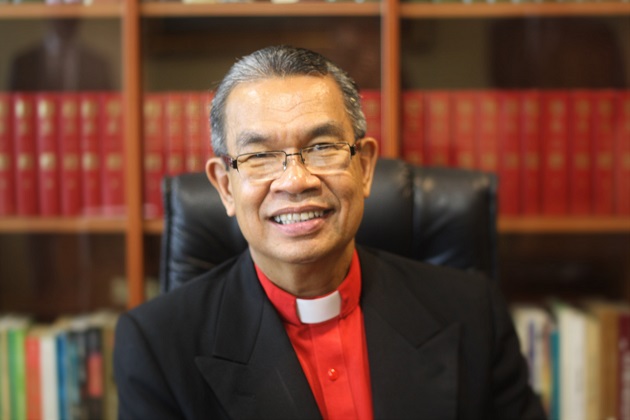 Bishop Efraim Tendero, in Rome, during the interview with Evangelical Focus. / J. Forster

To represent the sensibilities of evangelicals around the world, it is important to travel and listen to their perspectives. This is one of the emphasis the Secretary General of the World Evangelical Alliance (WEA), Efraim Tendero, remarked in an interview with Evangelical Focus and Protestante Digital.

Bishop Tendero, from the Philippines, has spent a big part of his first year in front of the WEA visiting and learning about the situation and opinions of churches and evangelical movements across the globe. This brought him to participate in the Italian Evangelical Alliance annual assembly in Rome (8-9 April).

There, Tendero called the evangelical Christians from all denominations to aknowledge their unity in the gospel and in the mission of God.

At the same time, he defended the collaboration with other faith groups and social actors in critical issues like the fight against corruption, the Creation care, and the global refugee crisis.

The Secretary General of the WEA analysed these themes in an interview with Evangelical Focus and Protestante Digital.

Q. First of all, why is it interesting for you to take part in this meeting here in Italy and to listen to the Italian views on the relationship between evangelical Christians and Roman Catholics?

A. The relationship between evangelicals and Roman Catholics is part of the agenda of the World Evangelical Alliance. But in order to have healthy relations with Roman Catholicism, we need to be first sensitive towards our own group, and particularly, to those who are from the Latin side.

So, last year I talked to Latin American evangelicals, and this year I am glad I have an opportunity to be with the Italian Evangelical Alliance. It is better that I first hear from them, before I pursue the relationship with the Catholic Church. It is a way to say: make sure you have a good relationship first with your family.

Q. How are the relationships between the WEA and the Roman Catholic Church right now? Have there been changes with the new Pope?

A. There are significant developments and changes with the new Pope. In the first place, the new Pope was friendly towards evangelicals when he was still a cardinal in Argentina. One of the leading pastors in Argentina, Norberto Saracco, was one of the friends of the former cardinal. The kind of relationship is positive and is there.

However, we also need to still be sensitive on how the rest of the churches in places where Catholics are a majority feel. So, for example, in the Philippines, in Spain and here in Italy, Catholics are a majority, and evangelicals a minority. So, we need to be able to first hear their perspectives before we continue to have that kind of relationship with the Vatican. 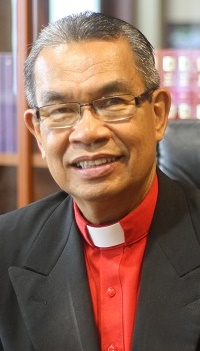 Q. In what areas do you think evangelicals and Roman Catholics can do co-belligerence?

A. In our experience in the Philippines, we have partnered with Roman Catholics in many issues, like the fight against corruption (both in government and in society), the alleviation of poverty, the promotion of peace processes, the promotion of integrity in the electoral process, the fight against human trafficking or addressing the adverse effects of climate change.

So, we can address many societal issues and can be co-belligerent in addressing those questions.

Q. At times, Christians in the local churches do not understand the distinction between co-belligerence and ecumenism. From your point of view, what are the differences between the two?

A. Ecumenism is trying to bring the level of partnership to a point of having union and merger. Therefore, we say that there are many points that we cannot have that kind of highest level of relationship.

But co-belligerence is the level of partnership on a level in which we do not have a fusion or union, but we are partners together, we are collaborating or networking to address a common issue. This is the basic difference.

Q. There is a joint document between the Pontificial Commission for the Unity and the World Evangelical Alliance. When will it come out? Is it public yet?

A. It is not public yet. The final document has been submitted both to the WEA and to the leadership of the Roman Catholic Church. There is an embargo on that until we hear from the side of the Catholic Church. On our side, the WEA Council has read it, and we are just waiting for our counterpart, before we can release the document.

A. First of all, our engagement on the issue of climate change is based on the Creation that God has given to us. In Genesis we see that God created this universe, He entrusted the care for Creation to the people he has created in his own image. So, this is part of our Creation mandate, to care for what He has given to us.

Now, for other Christians who do not see this as a priority, they see this reading in 2 Peter 3:10, and say that in the end the whole world will burn with fire, and therefore, why do we have to care for that. But we should not read one verse against another, we have to take the totality of Scripture. The other hermeneutical reading of 2 Peter 3:10 is that this creation will be subjected to trial and testing. What I want to say is that part of the image of God in men is the responsibility to be stewards to this Earth.

And we see also in Romans chapter 8 that creation will be liberated from futility in the final redemption. So, what God has created and what God has entrusted to us, is part of our priorities.

Q. There is another topic which is very important in Europe right now: the thousands of refugees arriving to our countries. In the last week we have been reporting at Evangelical Focus about local churches doing things like offering welcome boxes, inviting refugees to their buildings, creating mobile apps for refugees to use… Why do you think the church in Europe should get involved in this situation?

A. Last September, at the WEA we created a special task force, a global task force to provide leadership on how to handle this not only European but Global crisis for the refugees.

One of the main concerns is that in this time of crisis we have to show the love of Christ. Another perspective that I have is that these are the people whom God is bringing right to our doorsteps.

It is like the 10/40 window, the people who are in the biggest need of the gospel being brought right to the doorsteps of the Church. So, this is an opportunity to show the love of Christ.

It is an opportunity to minister to them in the time of need. And as we minister to them, they are not only in need in terms of the physical needs but also the spiritual needs. Therefore, the churches are in the position where they can provide for both needs. 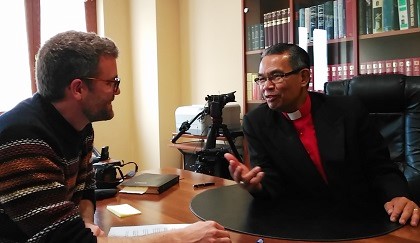 Q. Finally, we want to ask you about your first year in front of the World Evangelical Alliance. What things have made you happy in this first year?

The positive things are the appreciation of the width, as well as the depth, of the network of the evangelicals around the world.

In this first year, I have visited Africa four times, I visited South America twice, North America about four times and Asia more times, because I live there. So, around the world, I have seen how vast the network of evangelicals is. And I thank God for this network of evangelicals who love the world and are commited to fulfil the Great Comission.

Q. Thank you very much for your answers, Mr Tendero…

A. You did not ask me about challenges! (laughs)

Q. Of course, I can ask you about them, too! What have the chllaenges been so far?

A. The challenge would be how to keep our focus. And the focus is what brings us together. In that first year, our focus at the WEA is to establish and strengthen national alliances in all the countries of the world so that, in time, these alliances in different countries will be able to empower the national churches; so that the national churches will be able to effectively advance the Good News of Jesus and bring personal and community transformation in the society.

We want to keep that focus so that we can be used by God to fulfil the Great Comission.

But our task is to serve, we want to help, strenghtening the national alliances. This is why I wanted to come to Italy, to know the leaders and relate with them, and be able to encourage them to continue in the task of strengthening the churches, so that the churches can be more effective, and be used by God.

Published in: Evangelical Focus - world - Efraim Tendero: “We need to be sensitive towards evangelicals from the Latin side”