Together 2016 celebrated “unity” of Christians in evangelism

The event featured over 40 speakers from evangelical, Catholic and other backgrounds. It shut down five hours earlier, due to the high heat index. 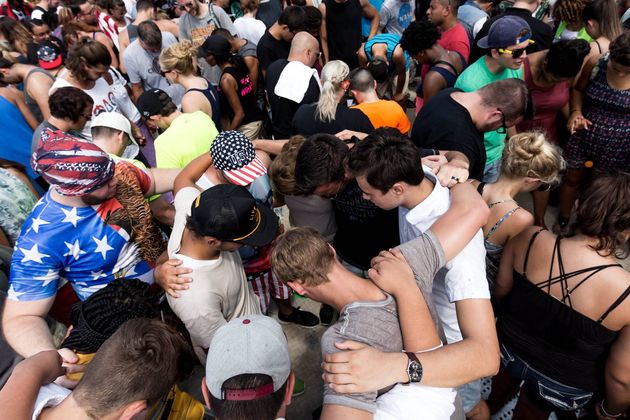 Thousands of youth gathered at the National Mall in Washington, D.C. on Saturday for the “Together 2016” / Facebook Together 2016

Thousands of youth gathered at the National Mall in Washington, D.C. on Saturday for the “Together 2016,” which sought to “bring people from all backgrounds together for a day of unified worship and prayer, asking Jesus to reset our individual lives and the nation as a whole.”

Some had expressed concern prior to the event as Hall had announced that Pope Francis, would be delivering a video message to those in attendance. Nick Hall, organiser of Together 2016, travelled to Rome to meet with the Roman Catholic leader and other Vatican officials ahead of the event.

He told Evangelical Focus that Pope´s message was “an invitation directed to the next generation”, and declared in Christian Post that it also was “a testament to the urgency and the need for followers of Jesus to unite in prayer for our nation and our world.”

The endorsement was posted on social media on June 21, which sparked much controversy, among those in favor and against ecumenism. Hall, aware of the concerns, told the crowd on Saturday: “We’re not saying it’s time to compromise Scripture. But there is something about reaching across the aisle.” 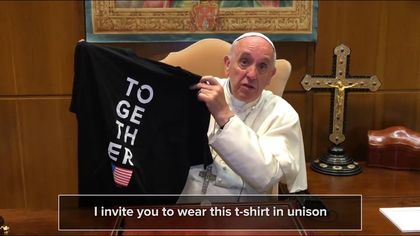 "WHAT IS YOUR RESTLESSNESS?"

"I know there is something in your heart that moves you, and that makes you restless, because a young person who is not restless is an old person. And you have youthfulness and youthfulness breeds restlessness.”, Pope Francis said in Spanish, in a YouTube video greeting to all of the millennials participating in Together 2016.

"God does not leave anyone disillusioned. Jesus is waiting for you. He is the One who planted the seeds of restlessness in your heart. Give it a try! You have nothing to lose! Try it. Then you can tell me" the Pope added.

A number of those on stage mentioned unity as they addressed the crowd: “If we’re singing the same songs together, then we can’t yell at each other”, Roman Catholic worship leader Matt Maher, told the audience. He has declared before that he believes it is his calling to work toward to the unification of Christians and Catholics.

Lecrae also declared in prayer: “When Your word tells us how to pray, it doesn’t say, ‘Go and speak to your Father, go and speak to my Father.’ It says ‘Our Father.’ It’s collective. We are family. Let us pray as family, God. Coming together saying, ‘We care about one another.'”

Francis Chan asked those gathered if after praying and worshipping together, attendees would be willing to be rejected for Christ together. 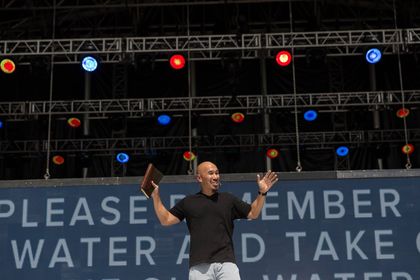 Liz Shedden, who serves as the director of Chan’s office, told Christian News Network that Chan “prays through the request” before agreeing to speak at an event, but that “he doesn’t look into many details surrounding the event, so he knows very little of the event itself.”

Pastor Samuel Rodriguez, leader of the National Hispanic Christian Leadership Conference (NHCLC), urged Christians to “shine the light of Jesus Christ into a dark world.”
Other Christian leaders shared their testimonies like Josh McDowell, who gave an emotionally charge testimony about overcoming his personal sexual abuse, and Ravi Zacharias, who shared how he came to Jesus after a suicide attempt as a 17-year-old in New Delhi, India.

“URGENT FOR OUR COUNTRY”

Christian singer Michael. W. Smith was asked how Together 2016 differed from other revival events that he has participated in the past.

"What sets this one apart is there seems to be an urgency like never before. I have never seen our nation in this state", he said. "You can probably go back to Billy Graham and he would probably say the same thing. We all have these monumental things that happen — good and bad — and we respond to it." 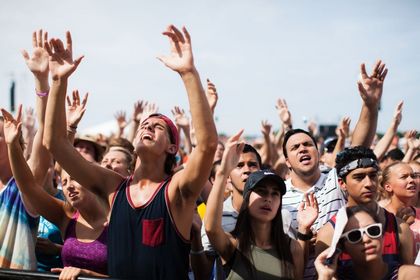 Casting Crowns frontman Mark Hall told reporters that he thought the gathering was timely considering recent headlines: “[Our nation] is in a bit of a storm and a lot of people are hurting. It felt like everyone just came together and prayed it together”, he said.

The event ended five hours earlier than expected due to extreme heat, as temperatures rose to above 90 degrees Fahrenheit

Fire and rescue workers responded to 502 medical calls for heat-related injuries, and 35 people were taken to the hospital.

“We believe this whole day is a statement of hope", organizers told the media at the close of the event. "We have seen people from all different places and backgrounds with a common belief: that Jesus changes everything. This event has never ultimately been about coming to the mall; it's always been about sending a generation out to share Jesus and the reset He offers.”
Throughout the day on Saturday, the hashtag #JesusChangesEverything was the third highest trending hashtag in the United States, with over 30,000 tweets.

Published in: Evangelical Focus - world - Together 2016 celebrated “unity” of Christians in evangelism