Cholera, one of the biggest risks for Haiti after the hurricane

Since the hurricane, at least thirteen people have died of cholera. "The worst crisis is yet to come”, NGOs warn. 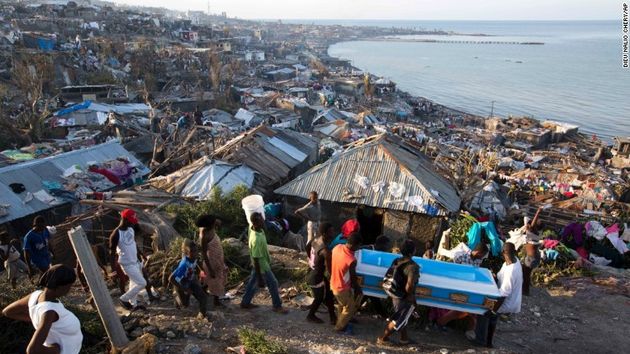 Around 2.1 million people, have been affected by the hurricane.

After the devastation caused by Hurricane Matthew in Haiti, although the government and NGOs differ on the number of victims -more than 370 according to local authorities, almost a thousand according to some agencies-the need for the immediate future is perceived with equal concern.
According to the Haitian Interior Ministry, more than 19% of Haiti's population, around 2.1 million people, have been affected by the hurricane, and more than 12% are in need of urgent assistance.

CHOLERA, A REAL THREAT
One of the country´s biggest needs is water resources, to prevent the spread of cholera. "The hurricane has accelerated the spread of the epidemic", said interim president Jocelerme Privert.
Since the hurricane, at least thirteen people have died of cholera. In 2010, after the earthquake, Haiti suffered a strong epidemic. And everybody is now trying to avoid it. The United Nations has said they have been involved in the attempt to eradicate the disease in Haiti.
According to Christian NGO Samaritan's Purse, the situation is difficult. "We are completing the evaluation of their needs and the distribution of hygiene kits, and water filtration systems. Our mobile medical team is also analysing communities to provide first aid and identify communities vulnerable to cholera and other waterborne diseases”, said doctor Lance Plyler.
"There's definitely cholera. Is endemic in Haiti (...) Our job is to prevent cholera through education”, he added.

“THE WORST CRISIS IS YET TO COME”

Intermón Oxfam also warned that "the worst crisis is yet to come. The loss of crops and a likely rise of the cholera are the major concerns, and should be addressed immediately by the international community”, they said in a statement.
"We are talking about extremely vulnerable populations, who have lost absolutely everything and will not have minimum conditions of survival without support", said Darrien Berendof, director of Oxfam in Haiti.

Published in: Evangelical Focus - world - Cholera, one of the biggest risks for Haiti after the hurricane