Christian woman in Pakistan dies after being set on fire

A Christian woman in Pakistan died on Sunday night (April 22) after a Muslim in the Sialkot area set her on fire for refusing to convert to Islam and marry him, relatives said.

Muhammad Rizwan Gujjar poured kerosene on 25-year-old Asma Yaqoob and set her on fire on Wednesday (April 17), resulting in burns on 80 percent of her body, sources said. 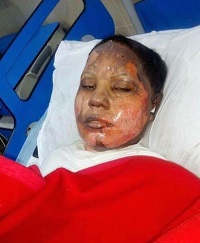 She and her father, Yaqoob Masih, and her brother Maqsood were at the house where she worked as a domestic worker for Saeeduz Zaman in the Mohalla Pakpura area when the attack took place, according to a police report.

Masih, a resident of Mohalla Bogara near Hajipura, stated in the police First Information Report (FIR 171/18) that he and his son had gone to Zaman’s house at 11 p.m. to meet Asma and inquire after the health of Zaman’s ailing mother.“We were sitting in a room when there was a knock on the front gate,” he said. “Asma went out to see who had come, when after some time we heard her screaming in pain. Zaman, Maqsood and I rushed outside to see what had happened and saw the accused Rizwan Gujjar fleeing from the scene while Asma was engulfed in flames.”

At Sialkot Civil Hospital, Asma Yaqoob told them that Gujjar had been pressuring her to marry him for some time, but that she had turned him down because she did not want to recant her Christian faith, Masih stated in the FIR.

Asma Yaqoob’s mother, Parveen Akhtar, told Morning Star News her daughter had previously complained of Gujjar insisting that she convert to Islam and marry him, and that he issued the demand again at Zaman’s house.

“Asma told us that on the night of the attack, Gujjar had come to Zaman’s house and told her that she has no other choice but to renounce her faith and marry him in court the next morning,” Akhtar said. “My daughter refused, upon which he emptied a bottle of petrol on her body and set her alight.”

The family rushed her to Lahore, 154 kilometers away, as there is no burn unit in Sialkot Civil Hospital.

Impoverished Christian women in Pakistan are commonly pressured to marry Muslims with promises of a better life. Asma Yaqoob was the sixth of 10 children born to low-income municipal workers who retired years ago, her mother said.

“My daughter is a staunch Protestant Christian and had been resisting Gujjar’s pressure for a long time,” she said. “She was not interested in him and had repeatedly complained about his misbehavior. When all efforts failed to convince Asma to cave in to his demand, Gujjar attempted to kill her.”

Police have arrested Gujjar, and he has confessed to killing the Christian woman, attorney Riaz Anjum of the Pakistan Center for Law and Justice (PCLJ) told Morning Star News, though published reports in Pakistan cited police saying Gujjar claimed she caught fire on accident.

Christian rights activist Napolean Qayyum, also of the PCLJ, said the local Christian community was proud that Asma Yaqoob had stood her ground and refused to succumb to pressure to renounce her faith.

“The brave girl belongs to a very poor family, yet she refused attempts to forcibly convert her to Islam,” he said. “It’s a good thing that the police not only arrested the accused but also managed to elicit a confession from him – in most cases we have seen, the police facilitate the accused when it comes to matters involving girls belonging to minority faiths.”

As an example, Qayyum said that a 13-year-old Christian girl (name withheld) was raped on April 11 by a local Muslim in the Sharaqpur area, some 25 kilometers (15 miles) from Lahore. Three young Muslim men stood guard while another identified only as Shehryar raped her, but the three alleged accomplices were not even named in the FIR, Qayyum said.

“The suspects belong to the powerful Arian community, and we believe that they are influencing the police to prevent their arrests, as none of them have been arrested till date,” he said.

The investigating officer in the case, Sub-Inspector Ijaz Khan, denied that police were showing any bias, telling Morning Star News that only Shehryar was named because he allegedly raped the girl.

“The other three men, according to the victim, did not rape her, so why name them?” he said, declining to comment on why the suspects could not be charged as facilitators, especially as the rape took place in a house belonging to one of them.

The girl’s mother, Razia (surname withheld) told Morning Star News that the accused were pressuring the family for an out-of-court “reconciliation” agreement.

“They are now pressing us to reconcile by offering us money, but we have resolved not to compromise over our daughter,” she said. “The Muslim boys have ruined the life of my daughter, and we will not rest till we get justice.”

Published in: Evangelical Focus - world - Christian woman in Pakistan dies after being set on fire