Three Americans released prior to the US - North Korea summit

The first ever summit between North Korean and US leaders will take place in Singapore on June 12. 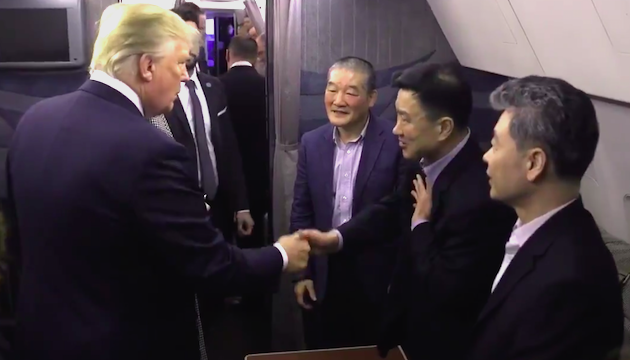 Trump welcomed the detainees at the Andrews Air Force Base near Washington. / Screenshot video Twitter POTUS

Three American men detained in North Korea for more than a year, including a pastor, have been released and brought back to the United States with secretary of state Mike Pompeo.

The release came while Pompeo was visiting North Korea on Wednesday, to arrange details of the meeting between US President Donald Trump and Kim Jong-un.

According to the North Korean state news agency KCNA, Kim Jong-un had confirmed he had accepted the US proposal to grant the three detainees an amnesty, adding that his meeting with Trump would be an “excellent first step” towards improving the situation on the Korean peninsula.

TRUMP: “WE DID NOT THINK THIS WAS GOING TO HAPPEN”

Trump welcomed the detainees at the Andrews Air Force Base near Washington at about 02:45 US local time this Thursday, and said he appreciated that Kim had allowed the men to leave as “frankly we didn't think that was going to happen before the meeting”.

When asked if this was his proudest achievement, the president pointed out that “it's a great honour. But the true honour is going to be if we have a victory in getting rid of nuclear weapons”.

Trump also said he wanted to pay his “warmest respects” to the family of Otto Warmbier, the American who was released by the North Koreans in a vegetative state, only to die days later.

A PASTOR, A MISSIONARY AND A HUMANITARIAN WORKER

Kim Hak-song worked at the Pyongyang University of Science and Technology (PUST) and was detained while in Pyongyang Station on 6 May 2017. He had previously described himself as a Christian missionary who intended to start an experimental farm at PUST.

Two weeks before Kim Hak-song was arrested, Kim Sang-duk, also known as Tony Kim, was detained. South Korean media said he had been involved in humanitarian work in the North.

Kim Dong-chul is a South Korea-born US citizen, who was ordained a pastor in his early 60s. He was detained in 2015 and sentenced to 10 years' hard labour in 2016.

“WE THANK GOD AND THOSE WHO PRAY FOR US”

“It's like a dream and we are very, very happy. We were treated in many different ways. For me, I had to do a lot of labour. But when I got sick I was also treated by them”, Kim Dong-chul said upon their arrival.

The three had released an earlier statement saying: “We would like to express our deep appreciation to the United States government, President Trump, Secretary Pompeo and the people of the United States for bringing us home”.

“We thank God and all our families and friends who prayed for us and for our return”, they added.

SUMMIT IN SINGAPORE ON JUNE 12

The first ever summit between sitting North Korean and US leaders will take place in Singapore on 12 June, President Trump has said this Thursday.

“The highly anticipated meeting between Kim Jong Un and myself will take place in Singapore on June 12th. We will both try to make it a very special moment for World Peace!”, Trump tweeted.

The highly anticipated meeting between Kim Jong Un and myself will take place in Singapore on June 12th. We will both try to make it a very special moment for World Peace!

US officials had also considered holding the summit at the Korean demilitarized zone or in Mongolia, but ultimately rejected both places.

During his stay in North Korea this week, secretary of state Mike Pompeo discussed the agenda of the summit in a meeting with Kim Yong Chol, vice chairman of the central committee of North Korea's ruling party.

Pompeo said there had been “good and productive conversations".

“We're planning it will be a single day, but in the event that there is more to discuss, there'll be an opportunity for it to extend into the second day as well”, he explained.

Meanwhile, Kim Jong-un emphasised the North's policy to “concentrate all efforts into economic progress”. “This is not a result of sanctions that have been imposed from outside”, he added.

Published in: Evangelical Focus - world - Three Americans released prior to the US - North Korea summit