The Chinese police agents have repeatedly interrupted Bible Reformed Church services and arrested its members. The members have refused to become a registered, state-run church. 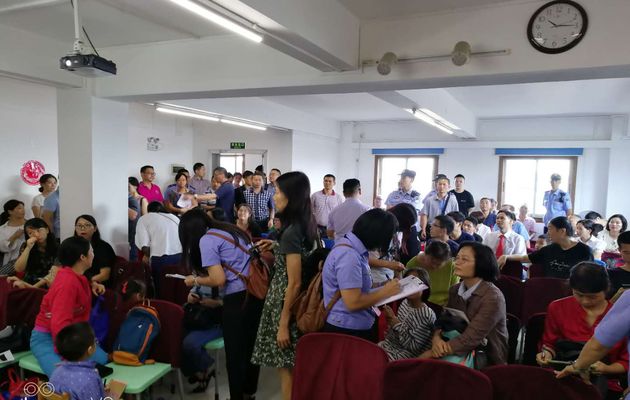 On Sunday July 15, 30-40 government agents broke into a Bible Reformed Church in China’s southern Guangdong province for the third time in a month, taking a number of the Christians into questioning.

Officials from the communist regime's Food and Drug Administration as well as some members of the police raided the church, asking to see the IDs of everyone gathered there.

They also sealed off the refrigerator and restricted access to a storage cabinet which contained utensils.

The pastor of the church, Huang Xiaoning, was among the people taken into questioning by Chinese officials during the raid, and he detailed what happened to non-profit Christian human rights organization China Aid.

According to Huang, “the service on July 15 had already begun when the Chinese officials entered the church. The arrival of the police and Food and Drug Administration employees prompted him to stop the service”.

Along with raiding the church, the officials from the Chinese government also handed Huang a “Notice Demanding Rectification”, which essentially ordered the church to halt its religious activities.

Bible Reformed Church was founded on Sept. 12, 2010, and currently has around 100 attendees every week. Since its founding, the police have consistently asked the church to become a registered, state-run church, but its members have refused.

THREE TIMES IN ONE MONTH

This is not the first time the Chinese government agents have targeted Bible Reformed Church, interrupted a service and arrested people who were in attendance.

The first raid took place on June 10, when more than 10 local agents arrived at the church during a worship service and took Huang and another Christian to the street management office for questioning that lasted several hours.

The authorities also accused the church for operating illegally, since it is not one of the churches registered with the government, which are subjected to censorship.

Although the church does not run a school, the local education bureau, public security bureau, and religious affairs bureau demanded that it stop conducting “illegal education”.

Huang is fighting the fine and demanding to get a court hearing. “I never feared imprisonment, since I never even feared death”, Huang said.