More than half million people march against abortion in Buenos Aires

On August 8, the Argentinian Senate will decide about the abortion Bill. “We need to make that voice of the unborn heard”, one of the pastors who organised the march said. 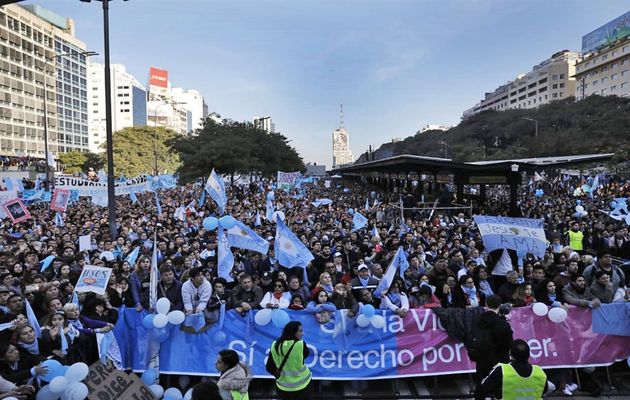 According to the organizers, more than 650,000 people marched this Saturday in Buenos Aires, expressing their opposition to abortion..

According to the organizers, more than 650,000 people marched this Saturday in Buenos Aires, expressing their opposition to abortion.

The march ended in front of the emblematic obelisk of the Argentinian capital. The demonstration was organized by churches and evangelical ministries of the country.

Many other Argentinian cities organized similar events, such as the province of Tucumán, which last Thursday declared itself institutionally as "pro-life” and against abortion through a regional law.

“LET'S SAVE THE TWO LIVES"

“We need to make that voice of the unborn heard”, said Pastor Osvaldo Carnival, one of the main organizers.

The protesters wore light blue kerchiefs, representing those who oppose the approval of abortion, and marched under the motto “Let's save the two lives”.

“THE LINE BETWEEN LIFE AND DEATH IS NOT NEGOTIABLE”

“Senators of the nation, this is the most important decision of your mandate”, said the pastor, Paula Delvecchio, the only one who addressed the audience uring the march.

She added: “It does not matter what your political ideology is: this is about crossing the line between life and death. For the evangelical people represented here, this line is not negotiable”.

In a statement prior to the march, the organizers recalled that in the electoral periods many candidates visit their temples to obtain votes, and pointed out that they will instruct their members not to vote for those who are in favor of the legalization of abortion.

On August 8, the Argentinian Senate will decide whether to approve the abortion Bill. Senators who oppose abortion seem to have enough votes to prevent their approval.

Several who had not defined their position yet, have done so in the last hours. With these movements, the opponents of abortion would have 37 votes out of a total of 70.

Meanwhile, the Catholic Church has also called on its members to express their rejection of the Bill in the streets.

The bishops have organised a "mass for life" in the cathedral, located in the central Plaza de Mayo, on the day of the vote.

Published in: Evangelical Focus - world - More than half million people march against abortion in Buenos Aires