Around 4,000 left Honduras to find a better life in Mexico and the US. World Vision calls for “a joint action between churches, civil society, companies and authorities to provide humanitarian aid”. 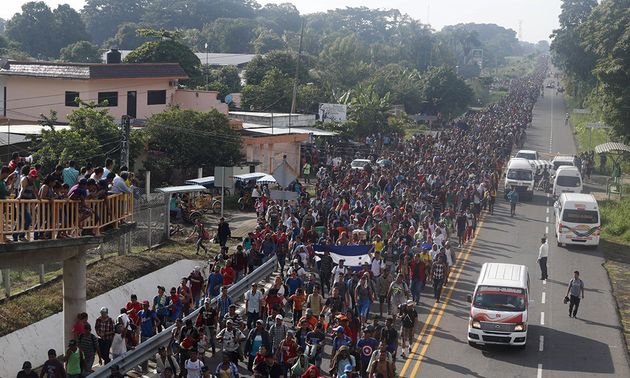 On Sunday, the migrant caravan reached the town of Tapachula, in Mexico's southern border with Guatemala. / El Caribe.

There is no fence or police force that can stop the hopes of the almost 4,000 Honduran migrants who have spent more than a week walking, since leaving home to try to find a better life.

On Sunday, the migrant caravan reached the town of Tapachula, approximately 37km (23 miles) from Mexico's southern border with Guatemala.

The Mexican authorities had earlier tried to stop them at a border bridge. But some managed to cross into Mexico illegally by boat over the Suchiate river.

In the face of this crisis, the Christian humanitarian organization World Vision released a statement, urging the authorities of Central American countries to “guarantee respect for the human rights of people in transit”.

The organisation specially focused on the protection of the rights of migrant children.

World Vision asks the governments of the region to “prohibit at all costs the separation of minors from their parents, mothers or caregivers”.

In addition, they call for “a joint action between churches, civil society, companies and authorities to provide humanitarian aid to this group”.

The Mexican authorities said on Friday that they had requested the intervention of the United Nations High Commissioner for Refugees (UNHCR), to establish shelters along its southern border.

Meanwhile, US President Donald Trump made it clear that migrants “do not enter" into US territory.

....In addition to stopping all payments to these countries, which seem to have almost no control over their population, I must, in the strongest of terms, ask Mexico to stop this onslaught - and if unable to do so I will call up the U.S. Military and CLOSE OUR SOUTHERN BORDER!..

On Sunday night, Trump blamed the opposition Democratic Party for illegal immigration, and threatened Guatemala, Honduras and El Salvador to “cutting off, or substantially reducing, the massive foreign aid routinely given to them”.

Guatemala, Honduras and El Salvador were not able to do the job of stopping people from leaving their country and coming illegally to the U.S. We will now begin cutting off, or substantially reducing, the massive foreign aid routinely given to them.

“We have sunburn. We have blisters. But we got here. Our strength is greater than Trump's threats”, a migrant woman told AFP news agency.

LOOKING FOR A BETTER FUTURE

World Vision cites figures from the National Human Rights Commissioner of Honduras, saying that 4,000 people -about 1200 children- from Honduras undertook the walk to Mexico and the United States last Saturday, October 13.

The humanitarian organization reveals that “interviews made in the field show that the caravan is made up mostly of family groups (mothers, fathers, children and even grandparents)”.

They pointed out that they left their homes “to improve their life conditions and escape insecurity, particularly the forced recruitment of young people by gangs and organized criminal groups”.