At least 290 killed in 8 bomb blasts in Sri Lanka

The bombings are the deadliest attack on Christians in South Asia in recent times. The attacks took place almost simultaneously in three Christian temples and luxury hotels. 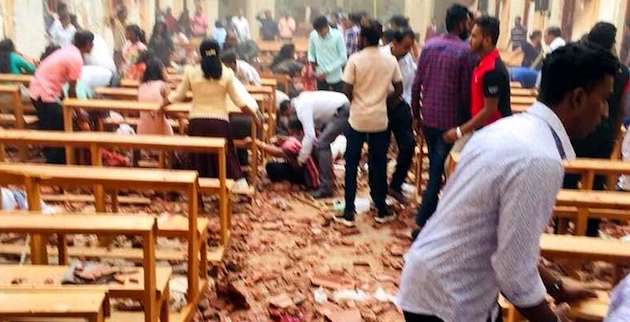 One of the churches attacked./ St Sebastian’s church FACEBOOK.

At least 290 people died and around 500 were injured this Easter Sunday, in a series of explosions targeting churches holding Easter services and hotels in Sri Lanka.

The blasts took place almost simultaneously in three Christian temples and luxury hotels and a residential center, mainly in Colombo, the capital of the country, where many were celebrating the resurrection Sunday, the most important day of Easter.

One of the explosions was at the evangelical Zion church of Batticaloa, in the east of the island. The other two were at St Sebastian’s church in Negombo, north of the capital and St Anthony’s Shrine church in Colombo (both catholic).

The Shangri-La, Kingsbury and Cinnamon Grand luxury hotels, all in the capital, were also targeted.

Two further explosions were reported as police tried to find those involved. One blast hit near the zoo in Dehiwala, southern Colombo, and an eighth was reported near the Colombo district of Dematagoda during a police raid, killing three officers.

The vast majority of those killed are thought to be Sri Lankan nationals, but the country's Ministry of Foreign Affairs says it believes at least 36 foreign nationals are among the dead, with most still unidentified.

There was no immediate claim of responsibility but The Sri Lankan police have arrested 24 people , in connection with the bombings, and investigators would look into whether the attackers had “overseas links”.

Late on Sunday Sri Lankan Prime Minister Ranil Wickremesinghe said at a press conference that there appears to have been information about a possible attack prior to the series of deadly attacks on Sunday.

“We must look into why adequate precautions were not taken. For now the priority is to apprehend the attackers”, he added.

Meanwhile, an intelligence memo warning of a possible attack had circulated 10 days earlier, raising questions about whether more preventative measures could have been taken.

“Serious action need to be taken as to why this warning was ignored”, Sri Lanka's Minister of Telecommunications, Harin Fernando, tweeted along with a photo of the memo.

The government has temporarily blocked social media services like Facebook and WhatsApp, “to prevent the spread of misinformation”.

The island-wide curfew that started right after the attacks, was lifted Monday at 06:00 local time (01:30 GMT).

Sri Lanka, with a population close to 21 million inhabitants, is a largely Buddhist country (70% of the population). Hindus represent 12%, Muslims 10% and Christians 7% (1.2 million people).

There has been growing intercommunal tension in Sri Lanka for several years. Last year, there were 86 verified incidents of discrimination, threats and violence against Christians, according to organisations that represent more than 200 churches and other Christian organisations.

This year, the National Christian Evangelical Alliance of Sri Lanka (NCEASL), recorded 26 such incidents, including one in which Buddhist monks allegedly attempted to disrupt a Sunday worship service, with the last one reported on 25 March.

In March 2018 a state of emergency was declared after members of the majority Buddhist Sinhala community attacked mosques and Muslim-owned properties.