Christians forced to ‘reconvert’, banished from their village in India

Christians were dragged to the village leaders and forced to sit and bow to the goddess idol. Police decline to act, sources say. 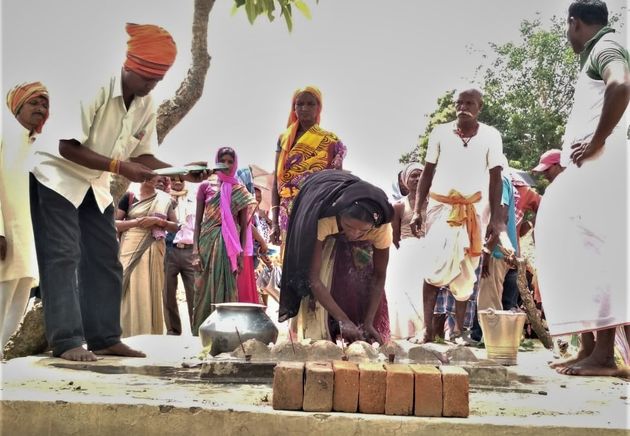 Christians who worshipped privately in their homes in a village in eastern India were dragged to local leaders last month and forced to bow to a goddess idol, sources said.

The mob action on June 14 followed an announcement two days earlier by the heads of Mahuatoli village, Gumla District in Jharkhand state, that 12 Christian families would be banished if they did not return to the tribal Sarna religion, they said.

Threatened with death, most of the Christian families have fled the village.

“Threats have always been there in this area in Gumla District, but it had never escalated to this point that the Sarna extremists vowed to take lives.” said area pastor Boyen Munda. “They are not in a right state of mind now. The Hindu extremist forces have joined hands with them and have been inciting them against the believers.”

The mob of 20 villagers broke into the home of Jogiya Munda and pushed him and his widowed mother out of their house, the pastor said. Munda and his mother, who have been Christians for 17 years, were dragged to the village leaders and forced to sit and bow to the goddess idol, Pastor Munda said.

“They poured buckets of water on them [as a purification rite] and made them do a ritual which is believed to be a procedure to renounce Christ”, Pastor Munda added. “They fled to a safer place very far away. The village heads plotted to kill the mother and son if they find them praying any day after the ‘reconversion ritual”.

The Sarna ritual is akin to a last chance for those who have left to return to their former tribal religion, he said. Two families who were also forced to undergo the ritual ostensibly renounced Christ and remain in the village, he said.

“But they shared with us that they have not done it on their will but because of the pressure they had been put through. It has been a month since the Christians are scattered in neighboring villages seeking refuge. It is the monsoon season, so if they can’t return back to cultivate their land, they will have to go hungry for next one year”.

The Sarna villagers had refused to supply water for the Christian families’ farm fields, disconnected their electricity and threatened to stop all government benefits, he said.

“But they [10 Christian families] stood against the plots devised by the most powerful religious extremists”. Pastor Munda told Morning Star News.

He said the Christians never held group worship in Mahuatoli village, instead traveling to Dolaichi for more secure worship.

“They never had an open service or loudspeakers – it has always been a private family prayer at each individual’s house”. he said. “Even that few minutes of private prayer is being seen as crime.”

At the June 12 meeting of leaders in Mahuatoli, the 12 Christian families were summoned for the public announcement of their banishment from the village.

“The Sarna religious heads and village council were present”, area Christian Gangadhar Munda told Morning Star News. “In front of the villagers, they declared us as ‘polluted’ and that the village should be cleansed from Christianity”.

The leader read out orders for villagers to refrain from mingling with Christians, exclude them from family and social gatherings, and to refrain from speaking with them, buying from or selling to them, or having any communication with them, Gangadhar Munda said.

Distressed by the orders, Christians Mangra Munda Junior and Balveer Munda, along with Gangadhar Munda, raised their concern, he said.

“We told the village heads that we don’t approve their decision, and that it is a fundamental right, and that we are free to practice Christianity,” he said. “We said we belong to this village as rightfully as other Sarna villagers. We did not commit any crime to be humiliated and ostracized publicly like this. How can they pass rules convenient only to them?”

The village leaders rebuked them for objecting to their ruling, he said.

“It angered them that we raised a voice against them. They said, ‘These Christians should be cleansed at the pandal [a raised platform for seating idols].’ But some of the village heads said that we should not be forced, and that if any Christian wants to return to Sarna faith, they should come to the pandal on their own. Nobody among our 12 families accepted this offer. We stood strong in faith and decided that no matter what happens, we will not give up our faith”.

In the early evening, however, a large mob showed up at Balveer Munda’s house, he said. They destroyed the entrance and demolished the walls, and when Balveer Munda tried to stop them, they shoved him away and stole food grain, clothes and chickens, Gangadhar Munda said.

“It was a robbery in broad daylight. When we tried to stop them, the mob threatened us that we would be killed if we don’t vacate the village immediately. Their threats grew intense; they said they will not offer us even a drop of water, and that our lands will be snatched away if we don’t obey their orders and convert to Sarna.”

His wife, he added, was in her 39th week of pregnancy at the time.

“They terrorized the woman and children. My wife was horrified watching them threatening me that they would kill me. She was panicked and under stress the past month.”

Her husband said leaving their home at that time was especially difficult, and his wife’s inability to eat well since then weakened her, contributing to a prolonged labor of 24 hours.

“We had no other option but to move from the comfort of our home to a believer’s house in neighboring village,” he said. “It was a sudden decision, and my wife had not fully adjusted herself here and had not been eating well. The doctors said she was too weak for labor.”

On June 17, the Christian families went to Bharno police station to submit a complaint, but officers refused to register their pleas and advised them to arrange a “compromise” and not file a case.

They then filed a complaint online, thus getting a First Information Report (FIR) registered, met with the Gumla District superintendent and handed over copies of the complaint and FIR, sources said.

A source who spoke on condition of anonymity said Hindu extremists influenced the villagers.

Aggrieved by police inaction, the Christians filed a private complaint under Section 200 of the Criminal Procedure Code in Gumla District Court on June 26. A hearing was scheduled for Monday (July 15), attorney Makshud Alam said.

“An increasing number of incidents of mob violence are happening in Jharkhand,” Alam said. “The extremist forces are setting up [tribal] Advisasis against Muslims and Christians”.

Police officials at the Bharno police station denied that the Christians came for help.

“They never approached us, and we did not receive any complaint,” Jaswinder Choudhary, the officer in charge of the station, told Morning Star News. “There are no religious issues in Mahuatoli village, and everybody is living in peace. If there be any problem, they can always file a complaint, and we will take action.”

Local newspapers tending to sympathize with Hindu nationalism such as Dainik Bhaskar, Prabhat Khabar and OP India claimed that Christians underwent gharwapasi (“reconversion” or “homecoming”), and that they were lured into Christianity earlier for healing.

Jharkhand state has a recent history of anti-Christian violence. On April 10, Jharkhand police found four Christians lying in a pool of blood in Gumla District.

A mob of 25 Hindu vigilantes trying to stop the slaughter of cows, which are considered sacred, had accused the Christians of killing cows and attacked them with swords and sickles.

One of the four, Prakash Lakra, reportedly succumbed to his injuries.

“The state government and the ruling BJP [Bharatiya Janata Party] are complicit in targeting the church and the Christian community”, John Dayal of the United Christian Forum told Morning Star News. “They have ranged tribal Sarna who are not Hindus against their brethren who have accepted Christ.”

Hindu extremists are targeting the church with an eye to grabbing land allotted to or bought for Catholic and Protestant educational and medical institutions the past century, he said.

“And they are persecuting missionaries, including Catholic nuns,” Dayal said. “The chief minister himself is party to hate speech. It needs be remembered that a Christian has been lynched by ‘cow vigilantes’ in the recent past.”

Advocacy group Alliance Defending Freedom-India has recorded close to 160 incidents of hostilities against Christians in the first half of 2019.

Anti-Christian sentiment has grown worse since the BJP’s rise to power in 2014, according to Andreas Thonhauser, director of external relations at ADF International. Hindu nationalist Prime Minister Narendra Modi was re-elected earlier this year.

“Many Christians had hoped that voters would not grant him a second term as prime minister of the world’s largest democracy,” Thonhauser wrote in a recent issue of the Catholic Herald. “While Modi won his first elections primarily on economic and reform-oriented ideas, this time his party focused on Indian identity and the Hindu nation.”

The outcome of the elections is not good news for the country’s Christians, Thonhauser wrote.

“Although Christians comprise only 2.3 per cent of India’s population, they are known for running excellent schools and well-maintained hospitals,” he wrote. “Anti-Christian sentiment is not a new phenomenon. Nevertheless, the situation has grown worse since the current ruling party’s rise to power in 2014.”

India is ranked 10th on Christian support organization Open Doors’ 2019 World Watch List of the countries where it is most difficult to be a Christian. The country was 31st in 2013, but its position has been worse each year since Modi came to power.

Published in: Evangelical Focus - world - Christians forced to ‘reconvert’, banished from their village in India