During the 42nd session of the UNHRC in Geneva, the World Evangelical Alliance called on the international community to protect religious freedom and peace. 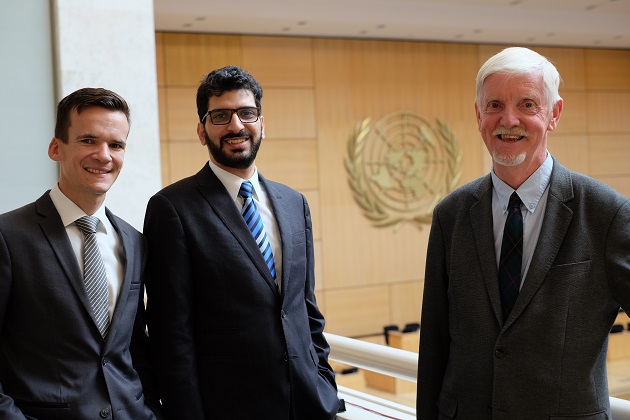 The positions of Evangelical Christians were heard during the 42nd session of the United Nations Human Rights Council, celebrated in Geneva from 9 to 27 September.

The World Evangelical Alliance, a recognised organisation representing 600 million evangelical Christians worldwide, had the chance to speak during the general debates. It commented on the human rights situation (including religious freedom) in Nepal (statement on 11 Sept), India and the US (13 Sept), Algeria (17 Sept), Bhutan (19 Sept) and Central African Republic (25 Sept).

The WEA denounced in the UN Human Rights Council assembly the “far-reaching restrictions on religious minorities” in Nepal, including “legislation that criminalizes attempts to convert someone from one religion to another”, which is “in violation of international human rights norms”.

The evangelical body mentioned several cases of discrimination against Christians in 2019. “In April of this year, four evangelical Christians were taken to court for religious conversion, amongst which was Mr. Dilliram Poudel, Secretary General of the Nepal Christian Society, which is a member of the World Evangelical Alliance. In May, a pastor has been arrested again for attempting to convert children. In June, two people including a pastor were arrested for attempting religious conversion. In July, a man was arrested for handing out Christian leaflets. In August, four members of a church in Salyan were arrested for leaflet distribution. In a private home in Dang, three people were arrested for fellowship”, the WEA explained.

“We reiterate our call to the government of Nepal to repeal its 2018 amendments to the criminal code, which criminalizes a large scope of legitimate religious activity, and to cease the unlawful arrests of Nepalese Christians”, the WEA concluded.

“HATE SPEECH AGAINST MINORITIES” IN INDIA AND THE US

The WEA denounced “hate speech, exclusion and the scapegoating of minorities” as it addressed the situation in India and the United States.

“In India, Hindu nationalism is increasingly evident as political leaders promote the notion that non-Hindu ideas and beliefs have no place in their country. In several places, mobs have threatened Christians and Muslims with violence and have attacked places of worship, while the police have repeatedly failed in protecting these same Muslims and Christians, and their respective property”.

But also in the United States, “anti-immigrant and hateful discourses have led to violence and even killings in the U.S.” The Southern Baptist Convention is one of the evangelical bodies that has “issued a resolution denouncing and repudiating white supremacy and every form of racial and ethnic hatred. Tragically too many American politicians have failed to echo the Christian church’s vital and important public statement”.

The World Evangelical Alliance “calls on political leaders everywhere to firmly speak up against hate speech, exclusion and scapegoating, and instead, to advocate for peaceful and inclusive societies”.

The statement of the WEA at the United Nations Human Rights Council on Algeria was agreed with the World Council of Churches, Christian Solidarity Worldwide and Jubilee Campaign. The North African country has been in the news in the last months for its aggressive campaign of closures of Protestant worship places.

They expressed “grave concern at the ongoing closure of Protestant Churches in Algeria. Over the last six weeks Protestant churches in Lekhmis, Ighzer Amokrane and Akbou have been sealed by the authorities, bringing the number of church buildings forcibly closed since November 2017 to seven”.

“However, authorities continue to refuse to recognise both the umbrella organisation of the Protestant Churches, l’Église Protestante d’Algérie, and churches which requested to be registered locally. In addition, the National Commission for Non-Muslim Religious Groups, which according to the 2006 Ordinance is in charge of approving church buildings, has not issued a single permit”, the statement said.

“The churches are therefore in a legal grey-zone of non-recognition, giving authorities the latitude to close one building after the other. We call on the government of the People’s Democratic Republic of Algeria to allow the forcibly closed church buildings to reopen, end the campaign against Protestant churches, and review the registration process”, they concluded.

The WEA said it “would like to thank the Royal Government of Bhutan for engaging in the UPR (Universal Periodic Review). We regret that none of the recommendations related to Freedom of Religion or Belief were accepted”.

The evangelical body noted “positively” the position of Bhutan’s government according to which the “registration of religious organizations is not a prerequisite for practice”.

But “without registration and formal government recognition, churches and other religious organization would not be able to organize publicly, own property, accept money, conduct outreach activities, or import literature. Therefore, we call on the Royal Government of Bhutan to allow the registration of churches”.

THE STRUGGLE FOR MANTAINING FRAGILE PEACE IN CAR

“The situation is still worrying in the Central African Republic”, the WEA analysed. Especially in the city of Birao, where armed groups have been active, which “shows the urgency of strengthening the process of demobilisation of armed groups, in accordance to the agreement of Bangui, 6 February”.

“The authority of the State needs to be restored”, the statement said, to avoid “disastrous consequences for the common citizens”. The commitment with “justice for victims of war crimes” should be upheld over any political negotiation, the Christian body said.

The WEA “greets the work of the inter-religious platform for peace, and we call on the international community to support this platform and their efforts”.