Police use force to eject Christians resisting in protest. The closures this week bring to 15 the number of worship buildings sealed since the government launched a campaign againt churches. 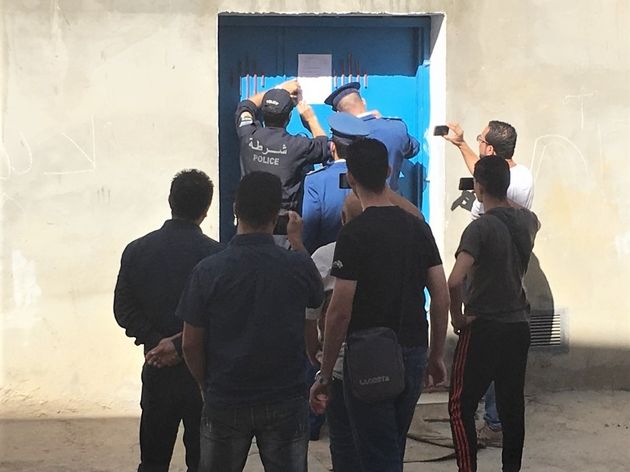 A third church in northern Algeria, Source of Light church in Makouda, was also closed on Tuesday (Oct. 15).

Pastor Mustapha Krireche of the Tafath (Light) church in Tizi-Ouzou said he was surprised how rapidly police acted to close the building of his 150-member congregation after summoning him to the police station.

From there they quickly drove him to the church site, site, where more than a dozen officers were about to seal the main door.

The pastor asked them permission to gather a few items, he said.

“As soon as I arrived at the scene, seeing that they were going to seal it, I asked the officer, a lady, to give me the time to look for the keys to be able to recover a few items”, Pastor Krireche told Morning Star News.

“The officer told me, “I’ll give you half an hour; if you’re not back then, we go into action and close everything”.

After he collected items, the church building was sealed within 15 minutes, he said. The pastor had been notified on Tuesday (Oct. 15) that the church building would be closed, the same day authorities forcibly closed the buildings of Algeria’s two largest churches over the objections of protesters.

Authorities had notified the Protestant Church of the Full Gospel of Tizi-Ouzou (EPPETO) that they would seal its building on Wednesday (Oct. 16), but on Tuesday about 20 police officers entered the premises of Algeria’s largest church, where more than 300 Christians had gathered in solidarity with local members.

Some of those praying for God’s intervention were in tears as police arrived who would beat and drag some Christians from the worship hall.

The EPPETO church has about 700 members, with another 300 in seven to 11 smaller churches in Tizi-Ouzou Province, according to advocacy group Middle East Concern (MEC).

Arriving just after Christians there had finished a service of worship and prayer, police at 5 p.m. implemented the closure order issued by the governor of Tizi-Ouzou Province.

When they saw that most of the Christians had left, they charged in, leaving a guard to prevent some Christians who tried to return from re-entering, church leaders said.

Pastor Salah Chalah, head of the organization representing Protestant churches in Algeria, l’Église Protestante d’Algérie or EPA, was inside the building along with Pastor Tarek Berki and a few other Christians who refused to leave, Pastor Chalah said.

Police forced them out, dragging some women by the hair, and when Pastor Chalah and other Christian men tried to intervene, officers kicked them and struck them with batons, the pastor said. He sustained minor injuries.

After sealing eight doors, police then departed to the mock applause of the remaining Christians, he said.

Half an hour later, Pastor Chalah spoke to those recording him with their smartphones, saying their religious freedom rights had been flouted.

He and other church members believe the closure orders for the EPPETO, Tafat and Makouda churches were issued in retaliation for a sit-in at a provincial government office on Oct. 9.

“The police intervened to force us out of our church – a church that exists and has been active legally and in the light since 1996”, Pastor Chalah said.

“It’s been 23 years that we exist in plain view; why wait until today to do so? May everyone know that we have been beaten and abused, including our sisters too, in our own premises for one reason only – our Christian faith. And because that’s the cause of our pain, we’re proud of it”.

He added that they resisted the police action but denounce all violence.

Representatives of the Tizi-Ouzou Human Rights League came to support the pastor, the Christians and the church, stating, “We regret what is happening, and we are with you all”.

Another sit-in was scheduled for Thursday in front of the Tizi-Ouzou headquarters. More than 400 Christians from throughout Kabylie Region participated in a previous sit-in in Bejaia Province.

On the morning of Tuesday (Oct. 15), gendarmerie sealed shut the building of Source of Life church in Makouda, Algeria’s second-largest church with 500 members. Makouda is about 25 kilometers (15 miles) from Tizi-Ouzou.

Some Christians were present inside the worship hall in resistance, but the officers forced them out, taking pastor Nourredine Benzid by the arms, according to a video posted on Facebook. Christians followed with worship songs and mock applause.

Pastor Benzid, secretary of the EPA, issued a statement saying it was a sad day for the country he loved.

“I never thought that one day places of worship could be invaded by the elements of security services with their weapons in front of children, women, old people and young people”, he said.

“It is unimaginable and unacceptable in the 21st century to see such a scene occur in a place of worship and in front of pacifist people”.

The pastor said he prayed to God to protect his church and to give wisdom, understanding and discernment.

“I ask everyone to pray for the church in Algeria and for our dear and beautiful country”, he pointed out.

The closures this week bring to 15 the number of worship buildings sealed since the government launched a campaign againt the EPA’s 46 affiliated churches and other Christian institutions in November 2017, according to MEC.

The closure orders are based on a 2006 ordinance requiring non-Muslim worship buildings to be licensed, but all applications to do so have remained unattended.

Islam is the state religion in Algeria, where 99 percent of the population of 40 million are Muslim.

Since 2000, thousands of Algerian Muslims have put their faith in Christ. Algerian officials estimate the number of Christians at 50,000, but others say it could be twice that number.